About 860 people have been evacuated due to the ongoing battle to extinguish the bush fire in the Nelson-Tasman area. 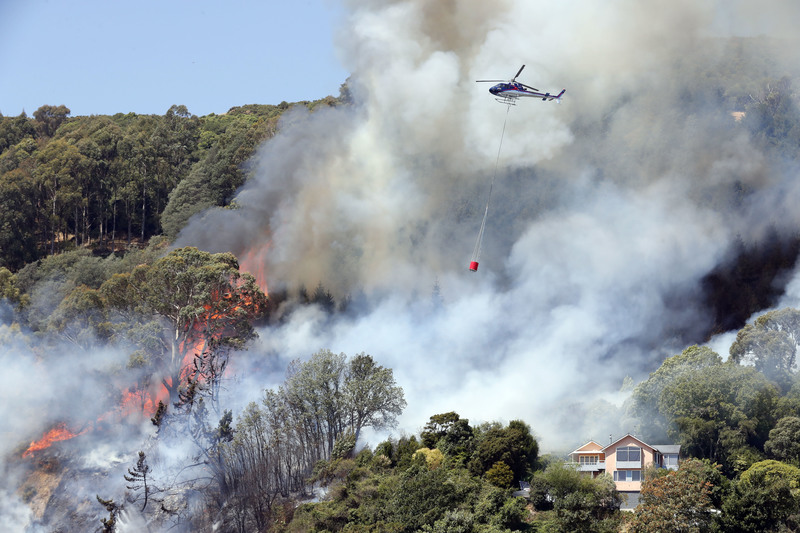 Firefighting crews are diverted to another blaze that erupted at Walters Bluff. Supplied / Paul McIntyre 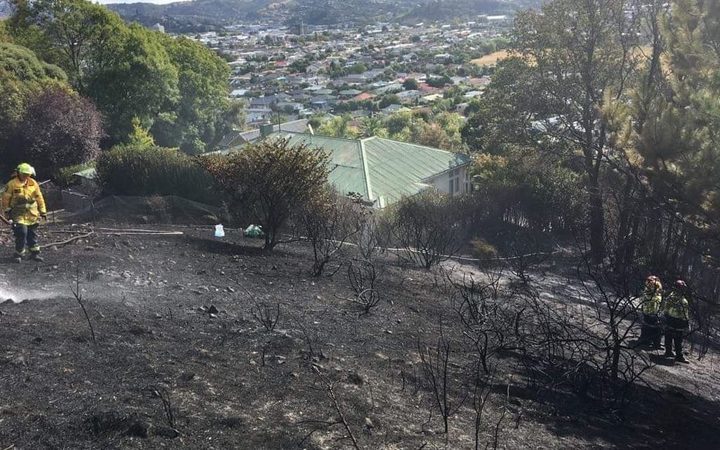 The burnt down ground at Walter's Bluff after a blaze erupted in the area. Facebook / Tasman-Marlborough Fire Service 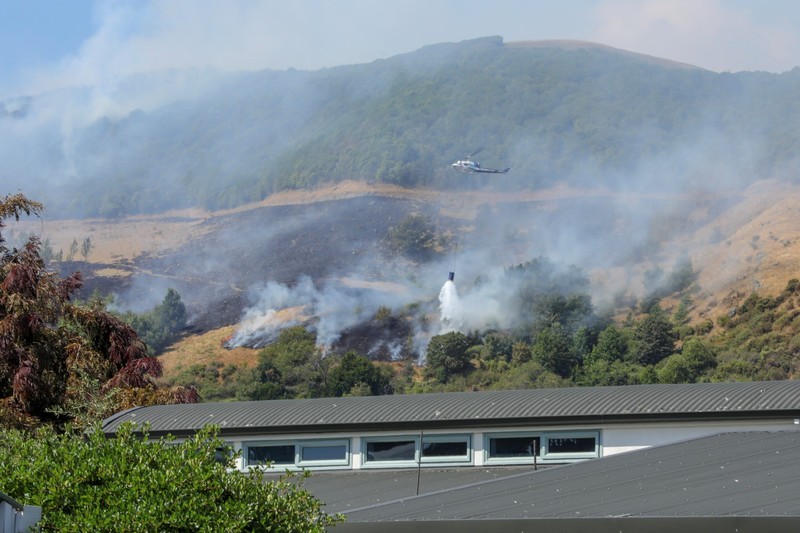 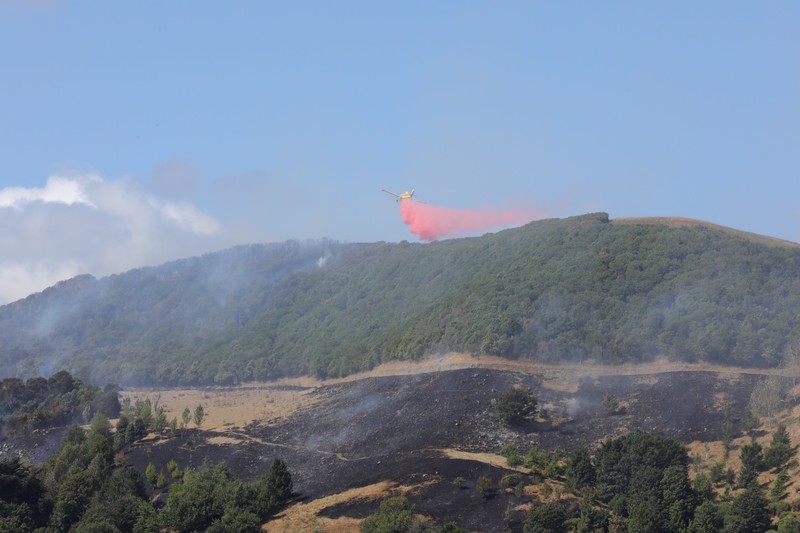 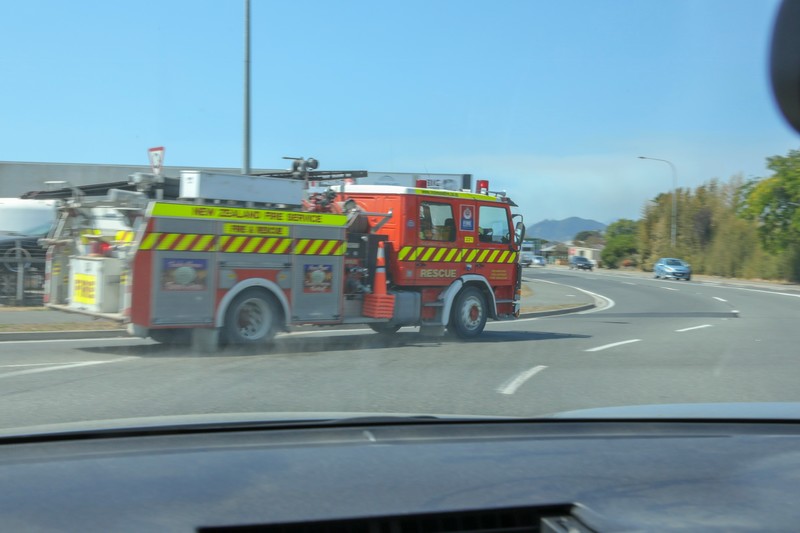 Firefighters diverted to another blaze that erupted at Walters Bluff. RNZ / Simon Rogers 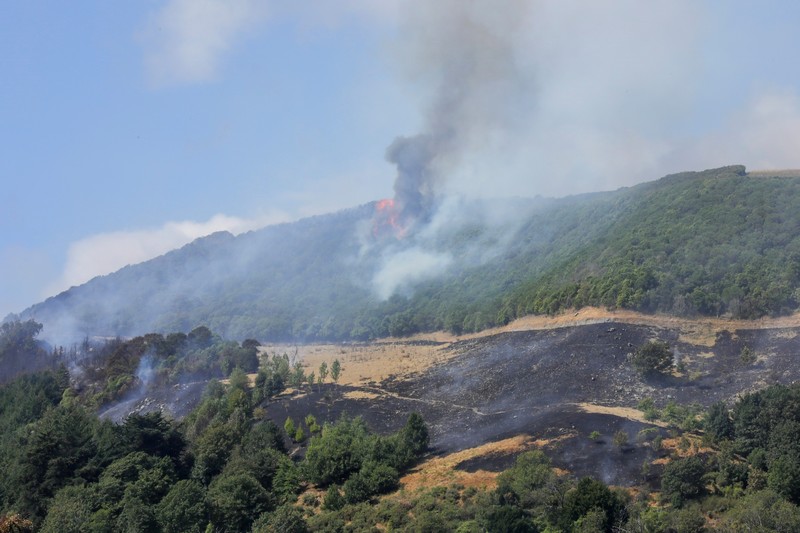 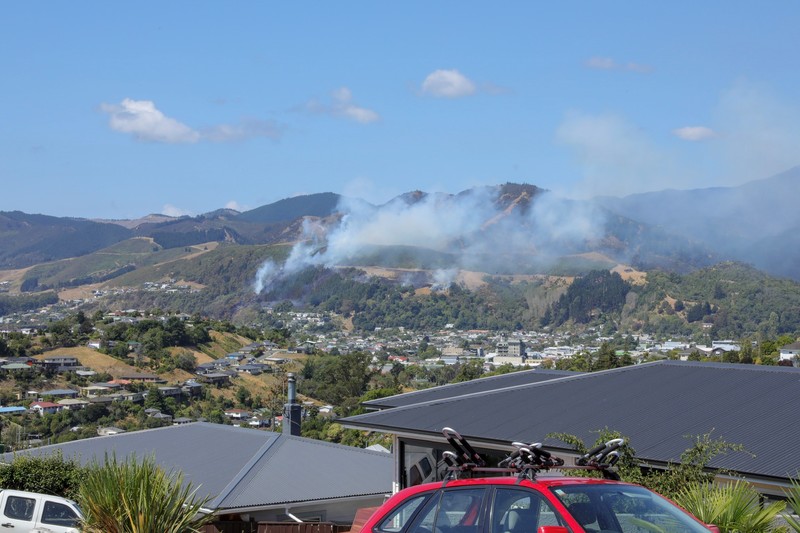 Wide shot of the fire above Nelson. RNZ / Simon Rogers 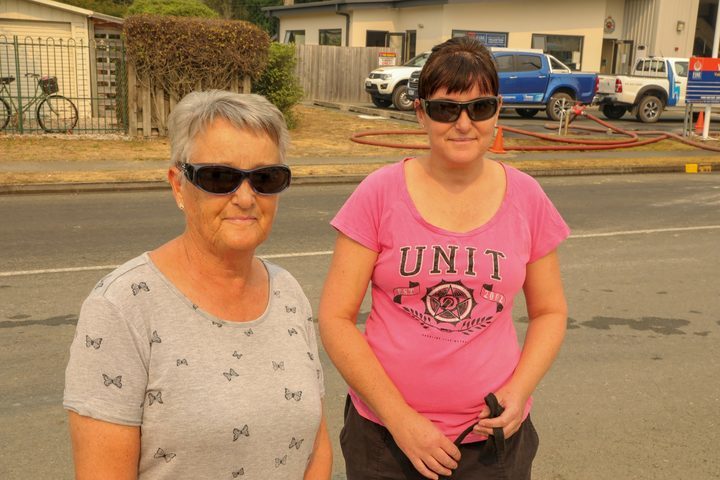 Yvonne Closey and her daughter Delia Perry are preparing in case the fire sweeps towards Wakefield. RNZ / Simon Rogers 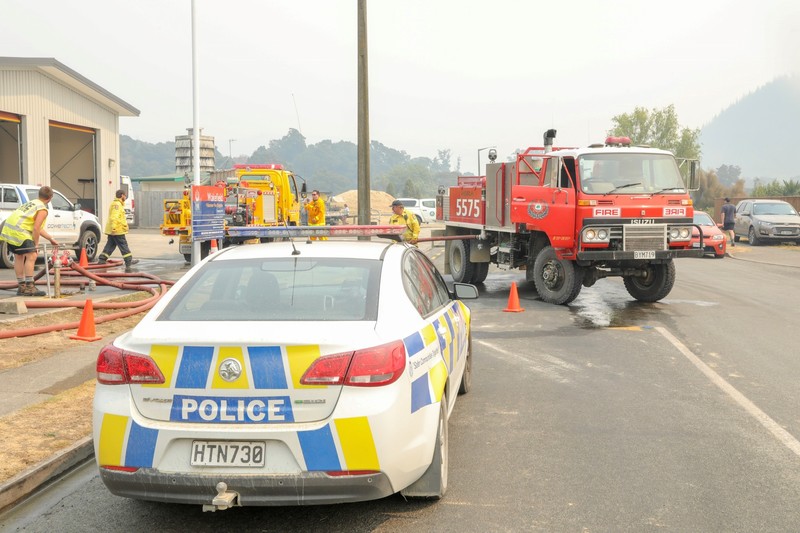 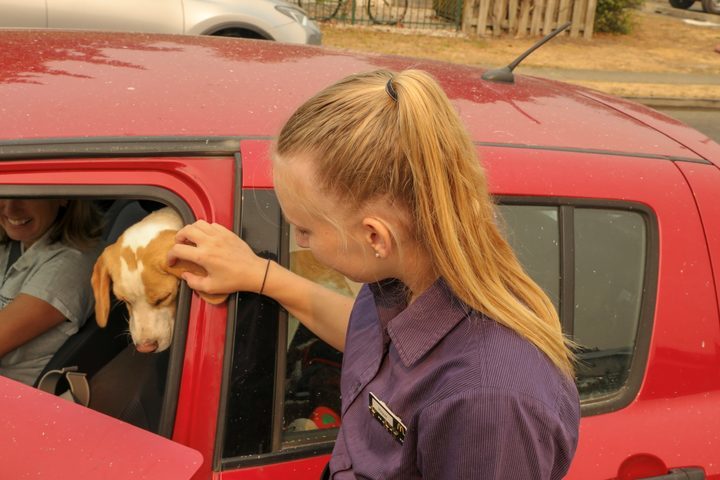 Maggie McLean's family has packed up their things but are staying in Wakefield as long as they can to look after their animals. RNZ / Simon Rogers 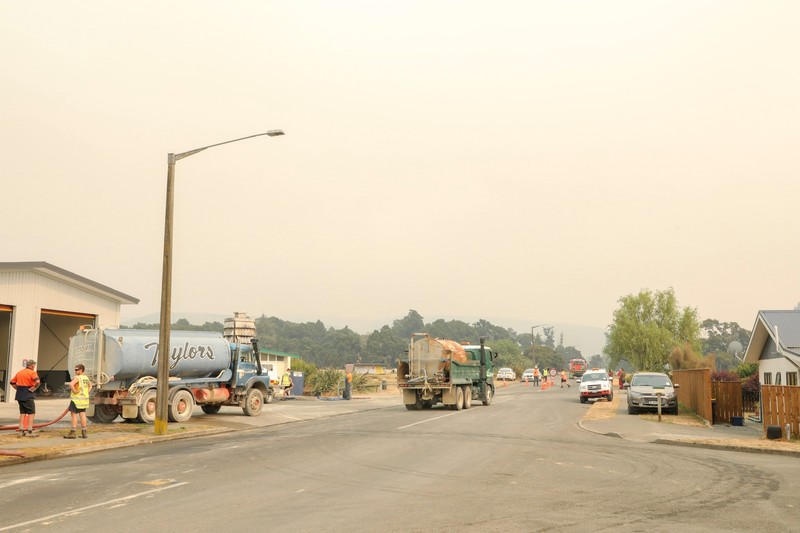 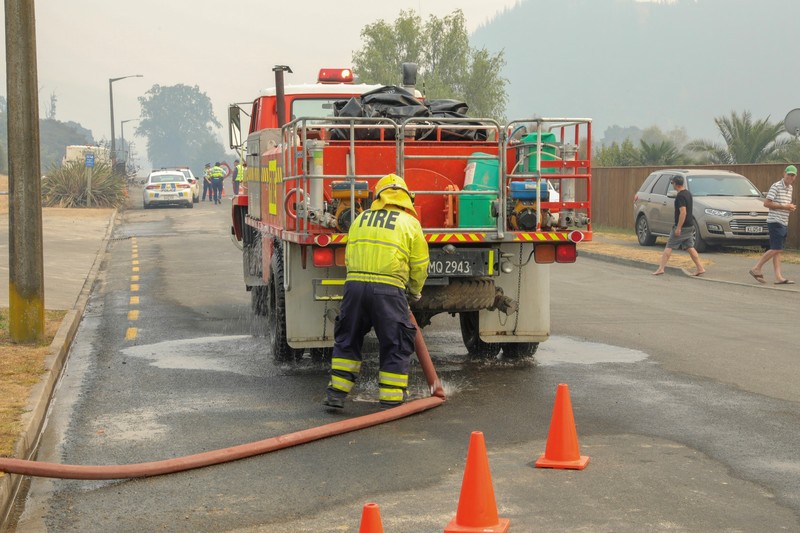 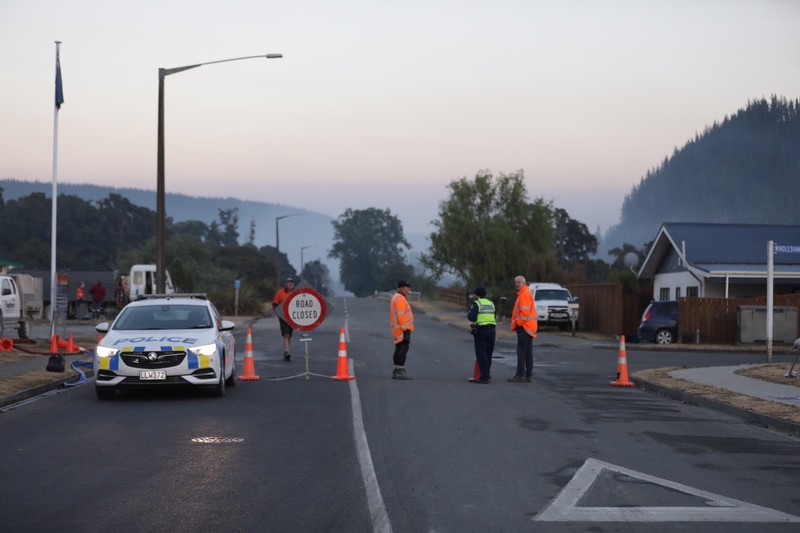 Wakefield township has cordons around it as an evacuation is ordered. RNZ / Rebekah Parsons-King 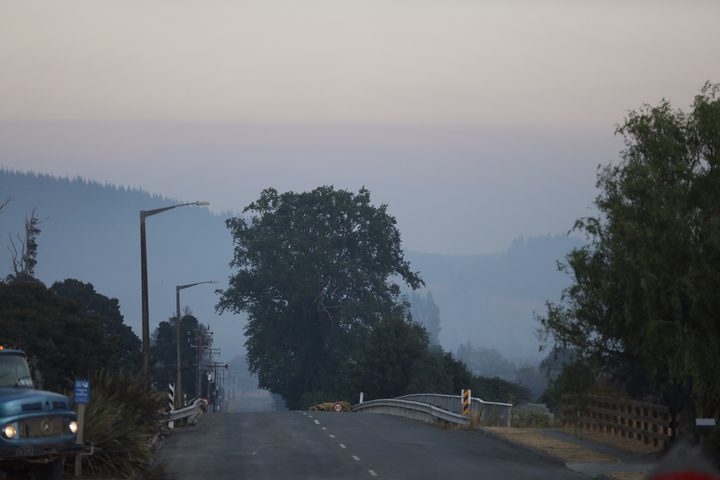 But Civil Defence now said 863 people had been evacuated, 35 of which due to the Walter's Bluff fire. It also said more people may have evacuated but not registered as having done so.

Those in the area bordered by Barton Lane, Higgins Road and Baigent Valley Road are being asked to leave.

One home had been lost and several others damaged by the fire's intense heat. No further structures were lost after one shed about 10pm last night.

Evacuations yesterday included those north of SH6 between Pigeon Valley Road and Simmonds Road, but had now been extended further across Wakefield. Teapot Valley, Pigeon Valley and Eves Valley residents have also been asked to evacuate over the past few days. Those in southern Wakefield are being told to prepare to evacuate.

The fire has so far burned through 2100ha, within a perimeter of 27km, compared with 23km last night.

Today 22 helicopters and two fixed wing aircrafts have been working on putting out the fire.

Those evacuating are being advised to follow instructions by Civil Defence and avoid cordoned off areas or re-entering evacuated places. The Civil Defence Centre in Wakefield has also been moved to Saxton Field Stadium.

"We're worried that the fire, even though it hasn't been growing at a large rate today thankfully, if the wind is rife then it could cause problems and will get very close the Wakefield township."

Mr Bush-King said it was a challenge to manage the changing wind conditions.

"When it blows towards Wakefield, that's when the risk heightens."

He said the fire had not grown, but had burned a lot within a contained area.

Mr Sutton said resourcing would remain the same overnight, except no helicopters would fly over.

"Really the important message to all of the residents and visitors is this is an extremely dry period. We are now in drought, officially in drought. Please stay out of reserves, please be extra cautious about what you're doing around your home," she said.

"The biggest challenges at the moment is getting the fire south of Richmond contained."

She said it was important that residents have their evacuation packs ready at all times now.

Fire crews diverted to another fire at Walter's Bluff

Earlier this afternoon, a fire erupted just above Nelson near the CBD at Walter's Bluff. Some fire crews had to be diverted to extinguish the blaze, which flared up again after getting under control.

"We don't actually know how it started," he said.

"We just can't see any reason why it started. Maybe I'm jumping to conclusions… but there's no logical reason at this stage.

"Investigators are out there now and in a day or so we might have some better intelligence on that."

He said while it was under control now, more work would be needed later on to dampen the site.

"But with a lot of firefighting resources nearby we were able to divert them to the fire fairly quickly.

"It is very frustrating. We had to divert away five helicopters and five fire crew plus important fire managers... and we'll have to go back there for at least a few days to make sure it's fully extinguished."

Civil Defence controller Dennis Bush-King said some Walter's Bluff residents had been moved out but a rapid response from fire services brought the situation under control, while just one house was damaged.

Nelson Mayor Rachel Reese told Checkpoint it was pretty sad if that was the case.

"It's incredibly frustrating. I just look at the hardwork these teams are doing throughout the city and we need the resources where they need to be and not be distracted with other places," Ms Reese said.

"They've got to do their investigation, I haven't got the details and right now the focus is actually on the fires that need to contained throughout the region. It is pretty sad if that is the case.

"We are really trying to preserve lives, we're trying to preserve homes, businesses, people's livelihoods. So when I look at the impact that this fire is going to have on our region, to our forestry sector, to our farming sector, we really don't need any other distractions."

She also reassured people in the area that, while the fire was not completely out, it was under control and being monitored.

"For those residents who are in the Walter's Bluff area in the wood area, the emergency services there monitoring, you may see some flare ups but they are there. The fire at this stage contained but it is not out."

A 49-year-old man was arrested near Walter's Bluff where the fire broke out at about 2.30pm.

Police said he was given a pre-charge warning for disorderly behaviour during a police operation.

They did not confirm whether the arrest is related to the fire, which is being treated as potentially suspicious.

Additional police, NZ Defence Force staff, and other agency staff supporting the evacuation process are being deployed to the Nelson area.

Around 120 police staff were deployed as part of the first phase of Wakefield evacuation.

40 new @nzpolice officers board one of our @NZAirForce Hercules in Wellington bound for Nelson to support the response to the fires.#Force4NZ pic.twitter.com/m9FWZb1mvo

Nearly 30 staff from Canterbury councils have also been deployed to help respond to the fires. They are expected to stay there up to the weekend.

Canterbury, North Island and West Coast have also chipped in with crews to help out, which Mr Sutton said helped give relief to those working non-stop.

NZDF is sending 18 Army chefs to cook for the firefighters and emergency response teams in Nelson.

About 50 additional NZDF personnel have been sent since this morning to help evacuate about 3000 Wakefield residents and enforce police cordons in affected areas.

Since Wednesday, 93 NZDF personnel and three fire trucks have been sent to support the emergency teams.

Agriculture Minister Damien O'Connor says declaring the Nelson-Tasman fires an Adverse Event will free up help for farmers throughout the region.

This morning the minister announced $50,000 to help Nelson-Tasman farmers and growers, after officially declaring a drought in the region.

Mr O'Connor told Checkpoint the funds might not provide a big windfall for any one farmer, but would help provide wider relief.

The fund can also be accessed by those in the region not directly affected by the fire, who are facing the same dry conditions.

"When they're talking with their bankers or talking with other people, everyone will understand that this is a pretty acute situation and that the farmer is not alone and challenged by this.

"It just means that all the agencies of government are aware of the dilemma and will help in any way that they can.

"While it's no significant assistance for any particular farmer, it says that this region is under pressure. We've obviously seen that the fire is a big challenge for especially those in and around the perimeter. For the wider region, this has turned around from what it was a situation with a reasonable feed, reasonable moisture prior to Christmas, to one now with acute shortage of both.

"We had to move here to ensure that people feel that they were supported. We're just ensuring that we're supporting those across the region and not just those in the firing line."

He said there was a lot of uncertainty around the future of jobs.

"We will now work on a plan to help them ensure that they have an income, we can't specify what applies to each individual worker, but government agencies will do their very best for them.

"In the future when we do the mop-up I guess, there will be less jobs because we've had a hell of a lot of trees burnt and those are the things we'll be needing to plan for in the future."

He said he was anticipating there would be talks on support for farmers in Marlborough and Northland, who were also facing dry conditions.