The water shortage is so bad at the Nelson blaze firefighters are having to dig holes in the ground to use the water that seeps through, and are trucking water from swimming pools to fill temporary reservoirs, Fire and Emergency says.

Incident controller John Sutton said the fire burning southwest of Nelson grew by about 200ha overnight and there's 48 hours of intense firefighting ahead if the blaze is to be contained.

A Civil Defence Emergency is still in place for the area, with about 200 homes evacuated.

Speaking at a briefing at 8.30am, Mr Sutton said water supplies were holding up but it was not an ideal situation.

"Most of it's artificially created, we have to dig holes so water can seep in too and we're dipping out of those.

"We're managing but it's something we have to work on, so we've got a lot of heavy tankers working, carting water for us." 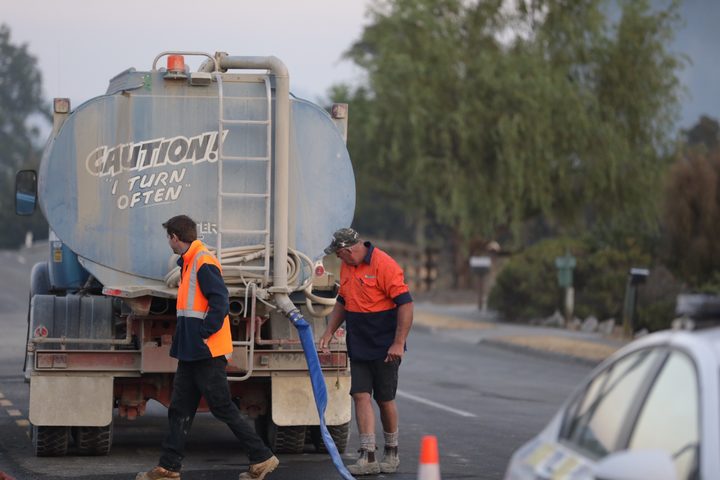 He said the wind change yesterday meant a challenging afternoon for firefighters - and the same is expected to happen again today about midday.

He said this morning was "absolutely critical".

More of RNZ's coverage of the Nelson fires:

"The fire was active overnight albeit at a slightly lower rate of spread, but our ... firefighters were very active putting structure protection work in," he said.

He said it had grown and was likely to be burning right through to next week. 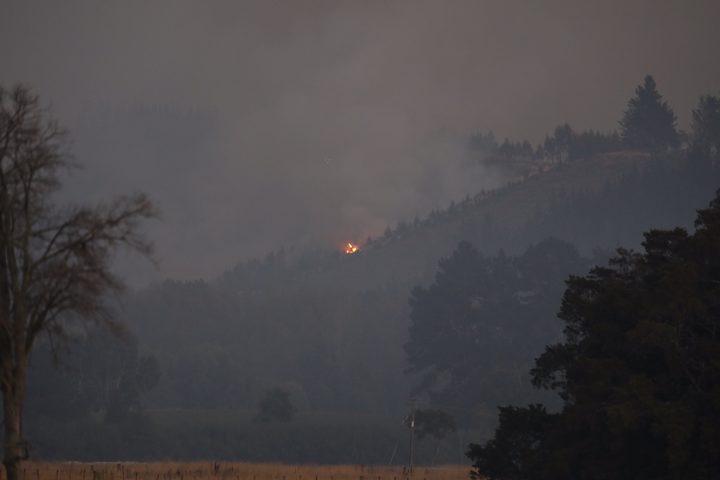 The fire expanded into another roughly 200ha, making it about 2000ha in size, overnight. Photo: RNZ/Rebekah Parsons-King

"There'll be some burning right through into next week, yes, let's hope it stays within the perimeter."

"We can't measure it exactly because the smoke problems are inhibiting access to some of the fire, particularly in the northern end."

He said those smoke problems meant planned return of residents to the Redwood area had to be halted. 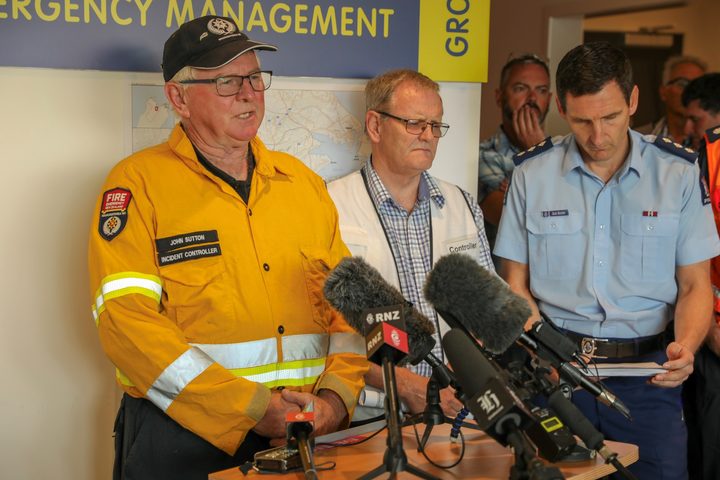 "That has affected some of the work that Civil Defence were hoping to get some of the residents back into the area today but I've had to recommend that that be put on hold.

"We'll be reviewing that during the day and hoping that we will be able to recommend access into that area ... this morning for us is absolutely crucial, we're poised all around the fire to benefit from the benign conditions first thing this morning."

"A bit cooler, not too much wind and we're really trying to harden up our protective areas ... from midday onwards I suspect will be a repeat of what happened yesterday."

He said only two structures are thought to have been destroyed so far, one cottage on Wednesday and a shed that was destroyed about 10pm overnight.

The most at-risk area was in the southeast near Wakefield, Mr Sutton said. Schools, kindergartens and early childhood education in the town have been closed for the day and residents have been asked to prepare to be evacuated.

"There is an opportunity this morning as long as the weather cooperates with us to defend that sou'east corner. We know that the wind is most likely going to increase and turn to the nor'east around midday and start to pressure that corner." 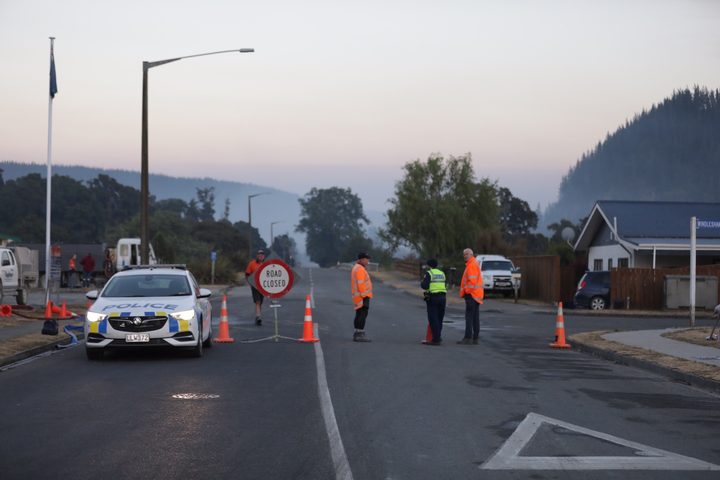 Emergency services guard a cordon in Wakefield township, where residents have been asked to be prepared to leave at a moment's notice. Photo: RNZ / Rebekah Parsons-King

He said the trigger point for evacuation was about 2km away.

"On our assessments of greater spread that gives an estimate of two hours warning ... at predicted windspeeds."

"The earlier that people can make decisions to move if they have somewhere to go to - to take, have their valuables and everything that's imp to them ready and consider animals and pets that they have.

Since then Pigeon Valley residents have been told to leave their homes due to the weather conditions and heavy smoke.

Mr King said the welfare centres were still available in Wakefield and there were discussions about opening more.

Mr Sutton said the Redwood area, which has already been evacuated, was also facing the possibility of fire spread.

"If there's a breakout there somewhere to the north of Redwood ... there's structures that would be at risk but it would take a lot longer for the fire to get there than it would in the sou'east direction.

"Unfortunately today we're going to get wind from both of those directions." 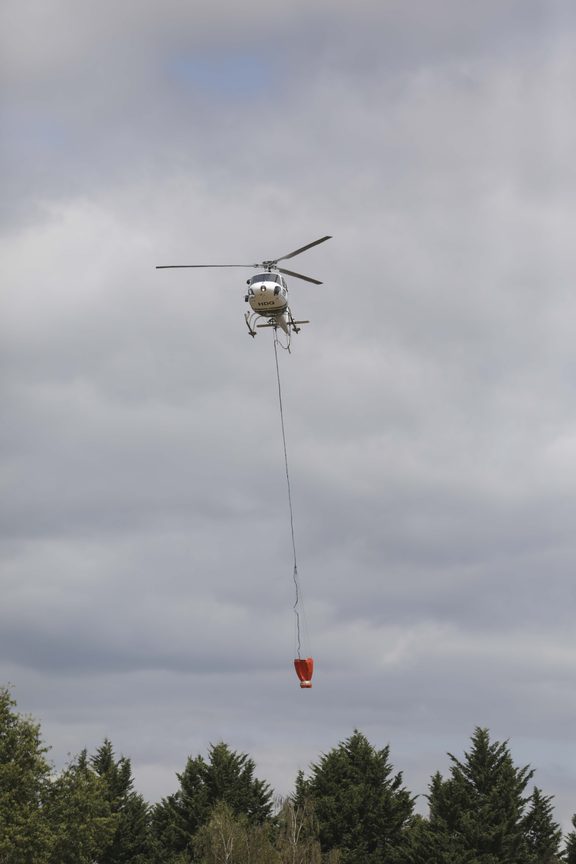 A helicopter at the Nelson fires. Photo: RNZ/ Rebekah Parsons-King

"We will be patrolling proactively in the wider areas affected by the fire. If you have no legitimate reason to be in the affected area you should not be there.

"We are working with FENZ (Fire and Emergency New Zealand) to allow safe access where possible ... we will also provide residents with updates as soon as we are able to."

He again urged people to avoid using drones anywhere near the firefighting operations.

"We could not locate either a drone or an operator but we do want to reinforce to the public that we do not want any drones being flown in or around the operational area.

He said the drones were a direct risk to aircraft in the firefighting efforts aiming to protect lives and property.

"We know this is stressful for the community and we want to reiterate that anybody who has a medical welfare or other need to please contact the support agencies that are available to you."

Mr Sutton said with some firefighters working long shifts in tough conditions, heat and exhaustion was becoming a problem.

"For some of our firefighters this is their fifth day.

"Certainly not double shifts but even one shift is enough. They're doing a 12-hour shift. It's arduous and it's hard work - and it's getting hotter. It was hotter yesterday than the day before and I think it'll be higher temperatures today.

He said the heat was an issue and something they had to manage. 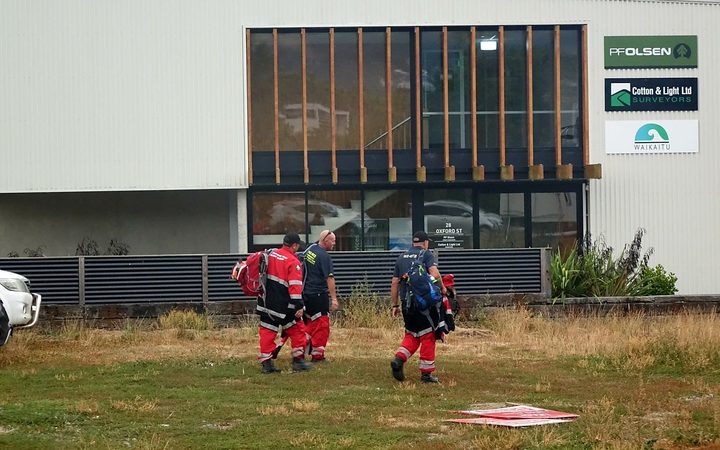