Logging companies operating in Tolaga Bay may be investigated after a deluge of logging debris left strewn over properties, roads and in rivers from flash flooding yesterday morning. 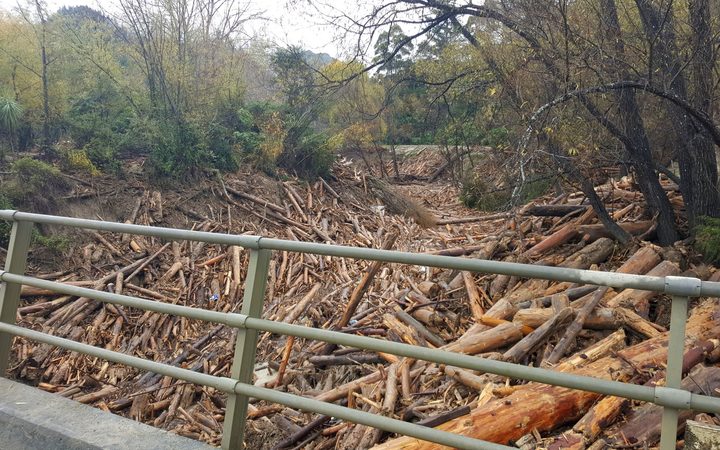 The slash caused widespread damage along the East Coast during the weekend's storm when it clogged up the Waiomoko river - flowing into paddocks and onto roads.

The debris was likely to have come from two logging companies in the area and an investigation would be launched, Gisborne District Council Environmental Services director Nick Zaman said.

"To put it into context we have had 266mm of rain in a 24-hour period, so there 's been land slips, but there might also have been practices in terms of what forestry companies have been doing ... and we'll be investigating ... it is very much likely to be a combination of both," Mr Zaman said.

Resident Linda Goff said she woke up to find a river of water around 3m deep running underneath her elevated house.

"We had a huge big cage trailer and we found out that it's down in the river, and that's moved from behind a bus and been dragged right out ... it's just the power of these logs. This would not have happened if these logs were not left to be washed down into our rivers," Ms Goff said.

Hikurangi Forest Farms, which operated in area, said it was puzzled by how much debris there was.

"Looking at the amount of slash involved in this particular incident, it's beyond precedent. We're not quite sure where this has come from," Hikurangi Forest Farms general manager Ian Brown said.

Several of the logs appeared to be very old, he said, but the company had invested reducing waste over recent years.

Earlier today the council said 61 bridges in the Tolaga Bay catchment were shut due to flooding, as authorities were on alert for more heavy rain and flooding in an already-sodden Tolaga.

Wigan bridge on Tauwhareparae Road out of Tolaga Bay was twisted and had moved at least 30cm after the flash flooding, the council said.

As a result, Tauwhareparae Road from Paroa Road onward will be closed for at least two weeks.

The council said it was currently inspecting about 10 other bridges with safety concerns, and all 61 bridges in the catchment would be examined over the next few days.