Torrential rain has caused flooding and slips in the Bay of Plenty after creating similar scenes in Auckland and Coromandel earlier today.

It's been a busy day for Fire and Emergency up north with more than 200 callouts for Auckland, the Thames and Coromandel area and Bay of Plenty, where calls were still coming in.

Most of them had been flood related, but calls have now eased. 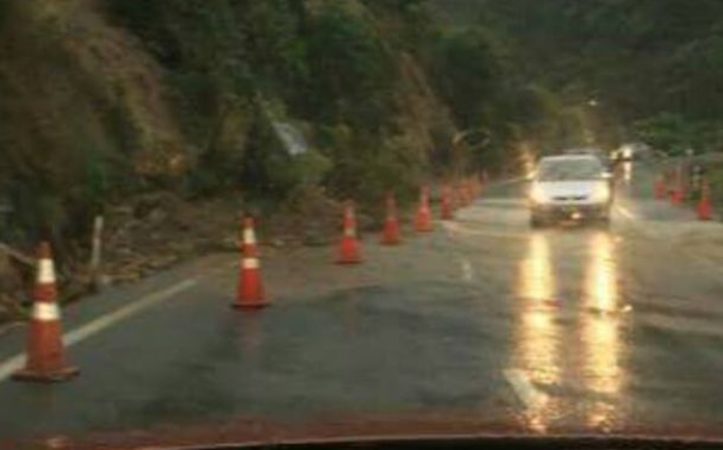 But it said another rain band tomorrow could dump up to 40 millimetres of rain per hour in Northland in the early hours of tomorrow and then Auckland later in the morning.

People in the Western Bay of Plenty are being told to stay home.

He said Steele Road was closed at Waihi Beach.

Gary Allis said reports of flooding were coming through from residents in Te Puke.

State Highway 2 in Katikati has reopened but there are significant delays, while many local roads have problems in Bay of Plenty.

State Highway 25 in Coromandel remains closed by flooding near Hikuai and there's delays due to storm damage on the Thames Coast Road section of the highway.

The Hauraki District Council is warning motorists to take extreme care when driving tonight. It said Barry Road near the Golden Valley bridge was underwater and closed.

Up to 80 millimetres of rain fell in parts of Auckland today, with Waiheke Island, Whangaparoa, Warkworth, Albany, Orewa, and Tamaki getting the biggest downpours.

The heavy rain then moved south to the Coromandel, causing surface flooding, slips, and road closures.

And while the North has been coping with intense rain, the South has been shivering, with a maximum of 1 degree in Alexandra and 3 degrees in Wanaka and Te Anau.

By comparison, Queenstown was an almost balmy 6 and Invercargill, Ashburton and Timaru 8.