A euthanasia advocate found guilty of importing a drug which can be used to commit suicide has been denied a discharge without conviction. 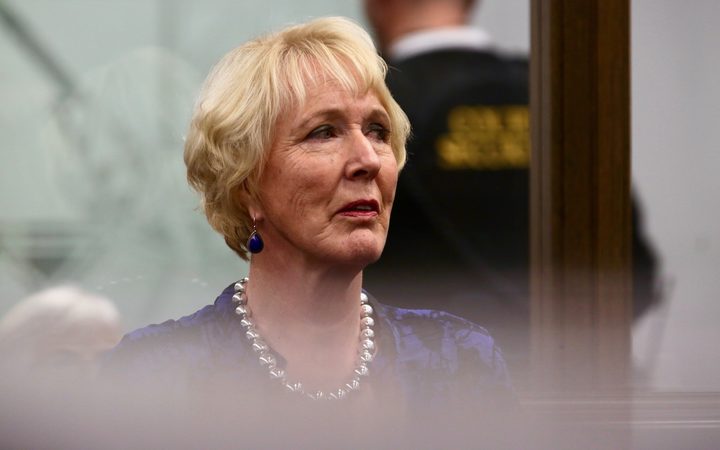 Susan Austen was found guilty of importing a suicide drug to New Zealand and was denied a discharge without conviction at her sentencing on Friday, 11 May, 2018. Photo: RNZ/Richard Tindiller

After a trial in the High Court in Wellington in February, Susan Dale Austen was found guilty of two importations of pentobarbitone, but acquitted of assisting the suicide of Annemarie Treadwell.

A jury in February found Austen not guilty on one count of importing the drug but guilty on two other counts of importing it, including bringing into New Zealand the drugs Ms Treadwell used to kill herself.

Her lawyer Donald Stevens sought a discharge without conviction, saying his client had displayed high ideals in her life, including support for others, compassion, and love for humanity. 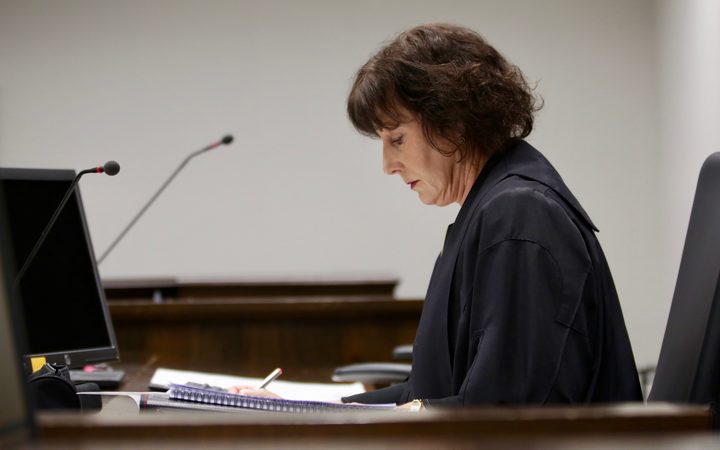 Justice Thomas convicted and fined Austen a total of $7500, along with court costs at the sentencing on Friday, 11 May, 2018. Photo: RNZ/Richard Tindiller

However, Justice Thomas said Austen's crusade for a law change, as the head of the Wellington branch of pro-euthanasia group Exit International, did not reduce her culpability for breaking the current law.

"You walked through customs in possession of pentobarbitone, having signed your arrival card and failed to disclose you were carrying a controlled drug."

"It is perhaps not surprising that you were charged whereas others have not been."

She entered a conviction and fined Austen a total of $7500, along with court costs of $260.

Justice Thomas said Austen's drug importations were premeditated and organised, and she had not taken responsibility or expressed any remorse.

She said Austen sought to minimise the seriousness of her offending by referring to her genuine desire to help others.

"What is troubling about that however, is there is nothing to suggest you are qualified to help people by providing them a lethal drug. When you were contacted by the police about Mrs Treadwell's suicide you told them you were quite naive about her mental health."

"You were not a close relative or even close friend as evidenced by your lack of knowledge of her mental health."

"You gave it to her without considering whether the support you say you want to offer people by giving a lethal drug was appropriate in her circumstances."

Justice Thomas said while Austen could be described as a crusader seeking a law change around assisted dying, that did not reduce her culpability for breaking the current law.

Defence lawyer Donald Stevens sought a discharge without conviction, reading from references which spoke of Austen's high ideals and compassion, including one from the former MP and euthanasia campaigner, Maryan Street.

"She refers to Mrs Austen's altruistic humanity and one of the others described her as an amazing woman who has 'the attributes we could all aspire to - compassionate, generous, honest and loyal'."

Mr Stevens said Customs had over 10 years seized pentobarbitone on 59 occasions, but none of those people had been prosecuted.

He said there was no parity between Mrs Austen's treatment and that of another woman who was helping her bag up small amounts of pentobarbitone with her when she was arrested.

"The Crown tried to suggest she had some form of early onset dementia and several of her conversations were played in court."

"[What she said] didn't sound like dementia, a suggestion she took strong exception to while sitting in the public gallery."

Mr Stevens said the consequences of a conviction would outweigh the seriousness of Suzy Austen's crimes, including the stigma of having a record, restricting her ability to travel internationally and affecting her ability to continue volunteering with various charities.

"She was told by two of them that if she were convicted a decision would have to be made by the board about whether she can continue with them."

"Obviously any charity would be concerned about this and it's not an answer for the Crown to say the work she's already carried out will be taken into account."

Justice Thomas disagreed about the effects of a conviction.

"It's hardly surprising that other charities such as Alzheimer's and the retirement home did reconsider her involvement, particularly after a high-profile trial and the charges she was facing."

" don't consider there's a real and appreciable risk you'll be barred from future volunteering because of a conviction. That an association might decline your services because of your offending is a different matter."

Outside the court, Mrs Austen said she was disappointed about not being discharged without conviction. However, she thanked all those who had supported her and urged others to get involved in backing the End of Life Choices bill.

"The very public support has made me feel even more certain that a majority of New Zealanders want a change in the law around the choice at the end of life."

"Severely ill New Zealanders should be able to legally seek a physician-assisted death if they are eligible for such assistance and if two doctors have independently agreed that there is no other way to relieve their suffering."

Euthanasia advocates stood outside the court during the sentencing holding up signs to support Austen's cause.

Ms Treadwell's death was initially treated as not suspicious, but after a suicide note was found the police investigated and a postmortem revealed she had died from pentobarbitone toxicity.

Ms Treadwell's diary revealed she was a member of a euthanasia lobby group, which Ms Austen was also involved with.

In the diary she referred to "suzy" helping her to obtain drugs from overseas and also the support "suzy" was giving her.

It was revealed during the two-week trial that police had bugged Austen's telephones, home and car.

Excerpts were played at previous court sessions, including part of a meeting of a euthanasia group held at her home.

Police were also found to have conducted a bogus drink-driving checkpoint down the road from a Hutt Valley euthanasia meeting and had used that pretext to collect the names and addresses of of those involved.

Austen's supporters packed the public gallery at the High Court.

One of them, Helen Cartmell, said the publicity arising from the police operation which targeted euthanasia advocates who had gathered at Austen's home had done more for the cause than the advocates could have themselves.

"This has raised people's awareness and I think a lot of people are beginning to think really hard about whether this opportunity for people should now be enshrined in law," she said.

The Privacy Commissioner found the collection of information at the checkpoint was also a breach of the Privacy Act.

For her part, Mrs Austen says she will no longer be importing drugs