The majority of people who tried to import the controlled drug pentobarbitone into New Zealand in recent years received a warning letter from Customs, but were not prosecuted, a Wellington jury has heard. 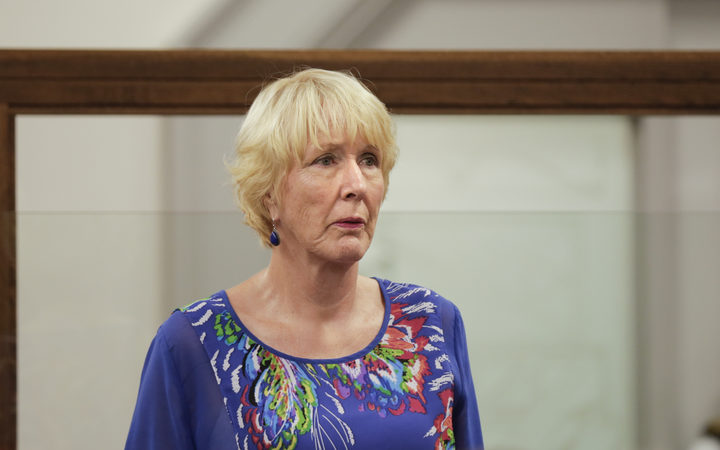 Susan Austen is on trial in the High Court in Wellington, accused of assisting in a suicide in 2016 Photo: RNZ / Rebekah Parsons-King;

The evidence was given at the trial of Susan Austen in the High Court in Wellington.

Ms Austen is accused of illegally importing the barbiturate, and assisting the suicide of Annemarie Treadwell in 2016.

Initially, Ms Treadwell's death was not thought to be suspicious, but after a suicide note was found, a postmortem revealed she had died from pentobarbitone toxicity.

Customs investigator Andrew Cunliffe told the court today police gave him a list of names and addresses to check against the Customs database for pentobarbitone importations.

The addresses were in a number of locations, including Wellington, Upper Hutt, Havelock North and Marlborough.

Mr Cunliffe also read to the court from a list of pentobarbitone interceptions carried out by Customs.

Only one of the importations on the list had been referred to the police, Mr Cunliffe said.

He was not sure whether Ms Treadwell had been sent a warning letter when her package of pentobarbitone was intercepted at the border.

"It's not stated so there wouldn't be anything in the activity to say a warning letter's been given, but if it had, it would say warning letter given on the date, so as it's not given I could not say what happened," he said.

Defence lawyer Donald Stevens asked Mr Cunliffe whether the reason so many people were just give a warning letter was because pentobarbitone was not much of a problem.

Mr Cunliffe replied that he did not know.

The list of interceptions only covered packages of pentobarbitone discovered at the border, but not all drug importations were investigated by Customs, Mr Cunliffe said.

The agency did a risk assessment in deciding which packages to investigate further.

"Hundreds [of packages are intercepted] weekly and we have to prioritise what we're going to do with our resource of time and people."

Mr Cunliffe said he could only speculate on the number of drug packages coming across the border and not being intercepted.

Braden Harris, the Customs officer who initially handled Ms Treadwell's importation of pentobarbitone, told the court an x-ray of the package indicated there might be powder inside, which led to further investigation of the package.

" couldn't tell from outside what was in it and there was no declaration form attached.

"I opened it up and there was a silver foil bag and inside that was a clear ziplock bag containing a white powder of unknown origin."

His attention was drawn to the parcel because it was coming from what he knew to be a drug supplier and was going to a private flat, Mr Harris said.