Love them or - more frequently perhaps - hate them, but freedom campers are here to stay. 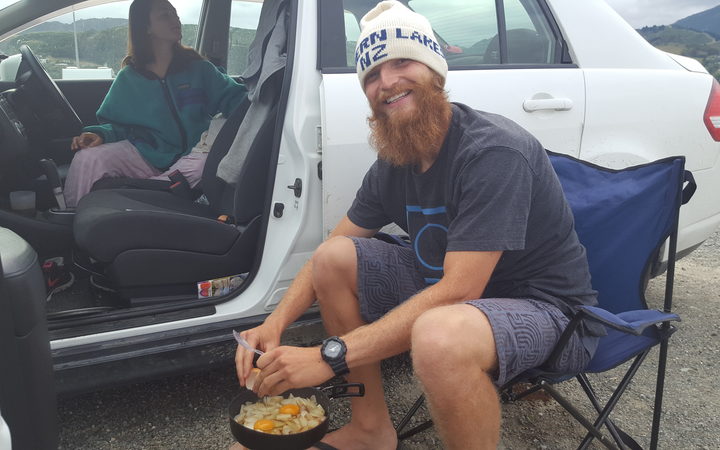 Aaron Marshall is a freedom camper from the US. Photo: RNZ / Tracy Neal

The number of international tourists who freedom camped while visiting New Zealand has nearly doubled in two years.

A new report from the Ministry of Business, Innovation and Employment shows foreign freedom campers rose from about 60,000 in 2015 to around 110,000 last year.

New Zealand is perfect for this kind of touring, according to Steve Hanrahan from Tourism Industry Aotearoa, who was at today's Freedom Camping Symposium in Nelson, led by Local Government New Zealand.

"New Zealand is by default a touring destination, where driving through the country is a great way to see it, as opposed to flying from point to point. So, with that brings some of the freedom camping issues," Mr Hanrahan said.

But there was agreement it was time to better manage those issues, like their habit of using our Great Outdoors as a toilet, or hogging all the supermarket car parks with giant campervans.

Local Government Minister Nanaia Mahuta, who gave the opening speech at today's Freedom Camping Symposium in Nelson, explained why it was time for change.

"We've seen over the last few years the negative impacts of freedom camping, and communities wanting to see some movement in this area. In my mind, the motivation and the imperative has been driven from our local communities saying: 'we've got to do things differently'."

A member of the group, Grant Webster, said it was the best tool he had seen for triggering positive change. He also headed the country's largest campervan rental company, Tourism Holdings, and said people should not ignore the benefits freedom camping brings to New Zealand.

"This kind of travel and tourism can really create dispersal to broader regions - it's going to help economic growth if we continue it. If we shut it down, we really are going to be shooting ourselves in the foot," Mr Webster said.

Conservation Minister Eugenie Sage said some of these communities - particularly the smaller ones - did not think it was fair their rates should go towards developing facilities like toilets for freedom campers.

She said that was leading to growing resentment and the country could not afford to dent its reputation for throwing down the welcome mat to one and all.

Tasman District mayor Richard Kempthorne said it was a timely conversation because applications are now open for councils to seek a share in the government's tourism infrastructure fund, designed to help build infrastructure for tourists.

Ms Sage said the rules set up to accommodate freedom campers during the 2011 Rugby World Cup are no longer suitable and it is time to consider other options.

"Do we need to move to an approach like France where vehicle camping is prohibited except in designated areas, and how do we ensure that users - the vehicle and roadside campers - contribute to the cost of the facilities they are using."

Mr Kempthorne said councils are also looking at a model freedom camping bylaw which could be adjusted easily to suit each area. He said a one-size-fits-all approach would make it easier for tourists, but it could never work for councils because each had its own unique territory to manage.

"One of the things we're looking at is having standardised signage, so wherever freedom campers go in the country, they will be looking at the same signs and that will make much more sense."