Freedom camping bans have been put in place at Queenstown Lakes District Council reserves at Lake Hayes, the Shotover Delta and the Wanaka lakefront.

The moves have been prompted by a surge in freedom campers this summer and after a minority degraded the district with some, as Queenstown Lakes Mayor Jim Boult put it, using the area as a toilet. 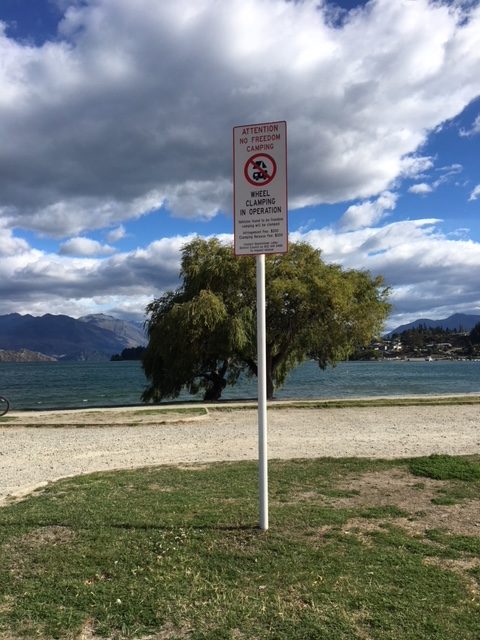 But Regional Tourism New Zealand said freedom campers were getting a bad name because of a few bad apples.

To help enforce the new rules, gates have been installed at Lake Hayes and the Shotover Delta. Anyone caught flouting the rules risking a $200 fine, having their vehicle clamped and their belongings seized.

People caught camping overnight at Wanaka's lakefront would also have their vehicle clamped.

Mr Boult said work was under way to review the district's freedom camping bylaw, reserve management plans and to develop a wider camping strategy for the area.

The council was already in discussion with the Department of Conservation, Land Information New Zealand, the NZ Transport Agency, and the Ministry for Business, Innovation and Employment to provide more roadside toilets in the district and to support other aspects of the freedom camping review.

"This is an issue that is bigger than our district and we're happy to sit around the table with local councils, central government, and industry to work on solutions that crack down on the irresponsible minority of freedom campers, while supporting those who play by the rules and respect our landscapes and special places," he said.

The council had sought community feedback on solutions to the growing problem.

The surge in freedom campers this summer had resulted in overcrowding, public health risks due to human waste, and environmental risks as some bathed and washed their dishes or clothes in the district's lakes and rivers.

"These areas are special to both residents and visitors alike and have simply been abused by a small minority of freedom campers, and there has been a loud and understandable public outcry," Mr Boult said.

"Families should be able to visit our reserves without worrying about seeing human waste or people literally airing their dirty laundry.

"It's a shame that we've had to take these measures as it will no doubt have an impact on responsible freedom campers staying in fit for purpose certified self-contained campervans. At the end of the day there is a legitimate concern around public health, we have heard the community's concerns, we have listened, and we have acted."

While penalties needed to be imposed on those knowingly flouting the rules, inconsistencies between districts was adding to the problem, he said.

"There is confusion ... that any visitor would be bewildered by," Mr Ives said.

"Some regions have no bylaw, while others have a bylaw, sometimes with different rules about where you can park, where you are banned, where you get rid of waste, what the penalties are or even if there are penalties."

Freedom campers should be provided with clear direction.

Ongoing meetings between the Minister of Tourism and district mayors was a step in the right direction, Mr Ives said.

"Local and central government needs to take a lead in finding solutions to the growing outcry in some communities over the small minority of careless campers, who ignore rules and don't respect the environment."

"Freedom campers are a plague in this region and they have reached epidemic proportions over the current summer.

"They have despoiled many a Central Lakes beauty spot and ruined many recreational areas."

Mr Laws has called on the Otago Regional Council to take a leadership role on the issue and look at what can be done at a regional level.

"We have been silent for too long. The Freedom Camping Act gives us regional responsibility and its time that we discharged it.

"It is important to note that Queenstown and its mayor are not simply reflecting community views on this issue but the sentiment of many tourism operators as well. Freedom campers are despoiling the tourism experience too."