Freedom campers say New Zealand is 'made for' people like them, as authorities face up to an issue they agree has reached crisis point. 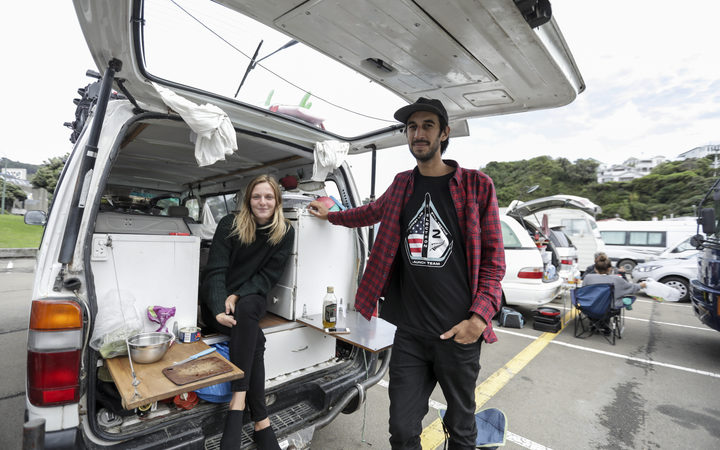 Freedom camper Juliette Amprino (L) and Julien Peris, both from France, say they consider New Zealand's freedom camping as a privilege and respect the areas they stay in. Photo: RNZ / Rebekah Parsons-King

More than 30 mayors from around the country met with tourism minister Kelvin Davis in Wellington today to discuss how to deal with the dramatic rise in overseas visitors camping for free.

The government is hoping that dubbing freedom campers 'responsible campers' might prompt a corresponding improvement in behaviour, and has set up a working group to figure out what else can be done.

Mayors wanted to see a consistent national approach to the issue, and to have the ability to set their own rules.

The Freedom Camping Act of 2011 was introduced to help cater for the tourists coming here for the Rugby World Cup, allowing people to camp for free.

However, in some tourist hotspots, councils have had to pass bylaws to prevent areas from being overrun by campers sleeping in cars and vans.

French tourists Julien Peris and Juliette Amprino were staying at Evans Bay marina in Wellington - their latest stop as they made their way around New Zealand in a self-contained campervan.

They said it was relatively easy to camp for free in New Zealand, with showers present at many beaches and plenty of public toilets around.

Sometimes the couple might pay $2 or $3 to get a hot shower at a local pool.

German campers Anna Zimmerer and Christian Bildhauer were parked right next door and said they had seen freedom campers at Lake Pukaki doing exactly what was riling up locals.

"You see people doing their dishes in the lake or having a shower, and it was especially the people who weren't self-contained," Mr Bildhauer said.

However, extra charges could stop them seeing some of the country's attractions, he said.

"If we save the money with the campground ... it's great for us so we can enjoy museums and stuff, or some sites that are quite expensive."

Rotorua Mayor Steve Chadwick said she foresaw the problem when the 2011 law was passed.

"It's not freedom camping anymore, it costs local communities, it costs neighbourhoods, in terms of the violation [and] the public health issues that they're facing."

One suggested solution was to put in better infrastructure like toilets and showers, to stop campers using lakes, rivers, and even local drinking fountains, to bathe and wash dishes.

Dunedin mayor and Local Government New Zealand president Dave Cull said one way to pay for that could be to charge a tourist levy.

"If the visitors are using the facilities then we have to have mechanisms to ensure that they contribute to the cost of them."

There was no silver bullet, but a combined central and local government approach was the way forward, Mr Cull said.