Auckland's Pride Parade kicked off with the cutting of rainbow-coloured ribbons and an address from Prime Minister Jacinda Ardern. 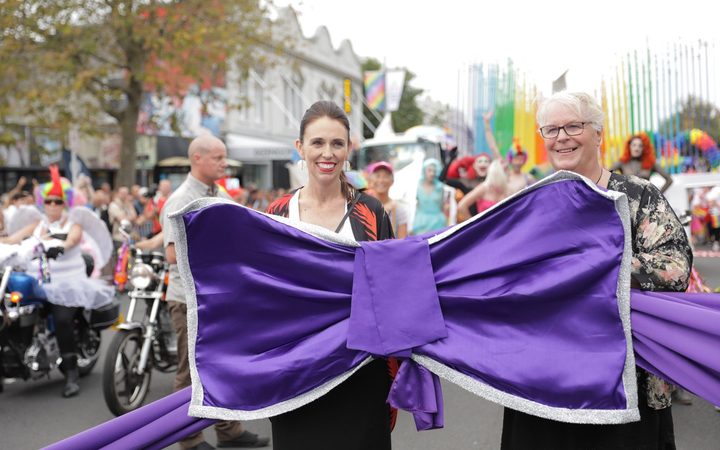 This year's parade was the largest yet, with between 25,000 and 30,000 people turning out to watch the revelry.

The event is dubbed by its organisers as the 'largest and loudest carnival of equality and diversity in Aotearoa New Zealand'.

Addressing the crowd, Ms Ardern said the government "walks beside" the Rainbow community.

It is the first time a prime minister has walked in the parade, organisers said.

Crowds watched 70 floats making their way down Ponsonby Road. The Dykes on Bikes motorcade headed the parade and were followed by Rainbow Youth flying flags, multicolored balloons and bubbles.

And, in a first for the southern-hemisphere, a same-sex couple were to exchange vows on one of the floats.

One woman said it was her first time at the parade and she was there to "celebrate all love".

The pride parade - now in its sixth year - marks the final celebration for the two-week long Auckland Pride Festival, which has showcased more than 85 musical, theatre and discussion events.

About to start walking in the Auckland Pride Parade on Ponsonby Rd with Westpac friends, family and colleagues #youbeingyou #pride2018 #walkwithpride pic.twitter.com/WWvusF1AR9

Floats included some made by the rainbow community, political parties, universities and businesses.

The Human Rights Commission, Auckland District Health Board and the New Zealand Rugby Community are among nine new organisations taking part this year.

The alcohol-free event focuses on "peace, love and unity at a time of escalating global unrest," its organisers said.

Many streets off Ponsonby Road were closed or had parking restrictions until 11pm, including Margaret Street, Pompallier Terrace, Redmond Street, Crummer Road and Hopetound Street.