Some 117 motorists who were trapped on the road overnight are now stuck in Fox Glacier with limited water, while about 600 tourists in Haast are also being told to stay put. 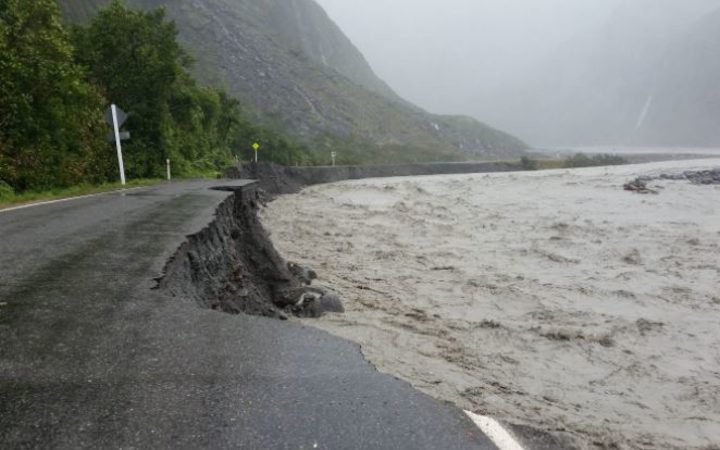 Many parts of the country were lashed by wild weather yesterday, when ex-tropical cyclone Fehi hit the country.

It blocked roads, brought down power lines and caused damage along the entire West Coast, which was still in under state of emergency at 4pm.

The West Coast District Council said a slip 100m long and at least 9m wide had blocked the road south of Haast, trapping the 600 tourists in the town.

Westland mayor Bruce Smith told Nine to Noon they had been put up in accommodation while the authorities figured out how to clear an escape route.

Haast has its own power supply, so its water and sewage remained intact, and everyone there was told to stay put.

A tour bus driver told Checkpoint he and his 51 passengers had been turned around heading east towards Wanaka, and were staying at the community hall.

Meanwhile the 117 motorists who spent the night trapped on the road north of Fox Glacier were able to get to the township this afternoon.

There was still a 60m-long slip at Omoeroa River north of the town, however, and power would not be restored there until some time tomorrow.

A West Coast Civil Defence spokesman Andy Thompson told Checkpoint some people from Haast travelled on to Fox Glacier, thinking they would be able to go north - but were now also stuck there due.

A 30-tonne digger is heading to clear the slip tomorrow.

A generator was being flown in tonight to get the water treatment plant working again, but until then water would be limited.

Westland District Council chief executive Simon Bastion said roading contractors were part of the stranded group so they had been able to keep in radio contact.

Further north, power was set to be restored in Franz Josef at 8pm tonight.

The highway between Westport and Greymouth, and State Highway 8 in Central Otago between Roxburgh and Millers Flat, also remained closed.

Check the map below, click the pins for information: