A helicopter has spotted the 50m missing section of the bridge which broke off in Southland after heavy rains, the Gore District Council says. 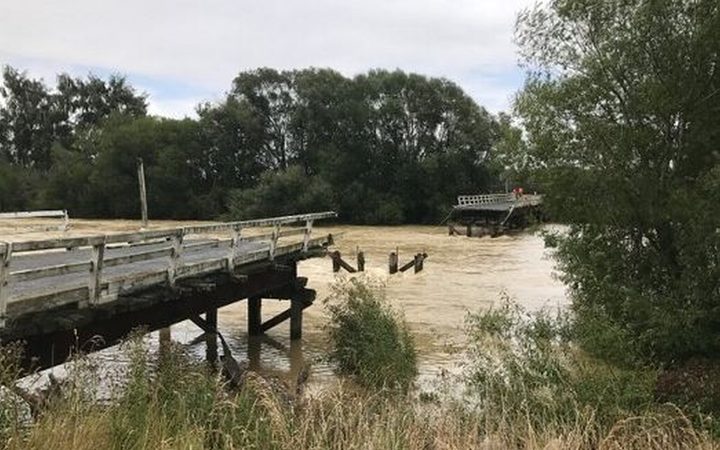 A 50-m section of the Pyramid Bridge in Southland has broken away and has since been found. Photo: Supplied / Gore District Council

A council spokesperson said a 50m section of the Pyramid Bridge had been spotted by helicopter 50m downstream on the Mataura River. 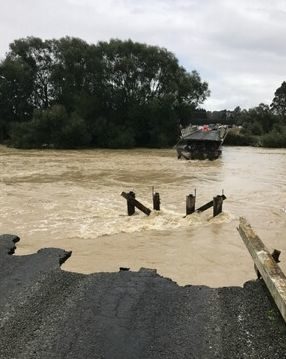 A 50m section of the Pyramid Bridge has broken off. Photo: Supplied / Gore District Council

There had been a build-up of debris at the bridge today, due to the high water flow following yesterday's heavy rainfall.

A spokesperson said it could not be seen from the road, and appeared to be wedged in did not seem to be a safety risk.

The water pipeline for nearby town Otama was attached to the aging bridge, which the council was looking to replace. Water has been cut to 253 connections, the spokesperson said.

Road closure signs are in place and the spokesperson said people are being urged to stay away from the river and any structures in the path of the debris.

A contractor who was working on the bridge managed to escape injury when it collapsed.

Gore District council chief executive Stephen Parry said the man was clearing debris and logs from the bridge when a section of the bridge broke off and fell into the river.

"The contractor, who was on the bridge with a machine, felt the bridge starting to wobble and quickly got the machine and himself off.

"And then an approximately 50m segment of the bridge then severed itself from the main structure."