Wellington Airport's bid to extend its runway could fail to get off the ground after a Supreme Court ruling late this afternoon. 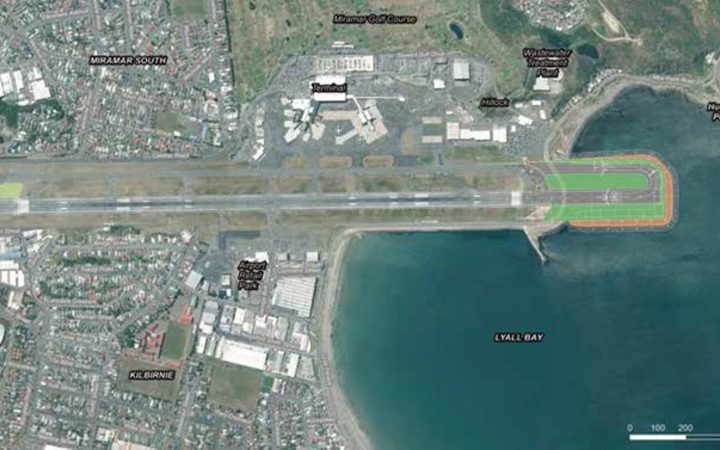 Wellington Airport with a rendering of the proposed extension. Photo: Supplied

The court has ruled in favour of the airline pilots' union, saying the Civil Aviation Authority should rethink its decision to allow a shorter safety buffer.

The airport and the pilots union have fighting a legal battle since 2015 over the airport's plan to leave the safety zone at either end at 90 metres - the minimum under the law - which was approved by the Civil Aviation Authority or CAA.

Under the Civil Aviation Act, safety areas at the end of a runway must extend to at least 90 metres and "if practicable" up to 240 metres.

Wellington Airport argued "practicable" included considerations of cost - and that 90 metres was safe.

Its lawyers argued that extending the safety zone to 240 metres would effectively double the cost of the runway extension, which was projected to be around $330 million, to prevent an accident that was statistically likely to happen less than once every 200 years.

The CAA agreed, saying that relevant factors - cost, safety, ease of construction - should all be assessed on a case-by-case basis because every airport was different.

Commercial pilots challenged the CAA's decision, arguing "practicable" meant what could physically be done and that safety should count for more than cost.

They argued that if the airport could extend the runway by 355m, lengthening the safety areas must also be physically possible.

In a unanimous decision, the Supreme Court found the CAA director erred in law with his cost-benefit analysis, which simply pitted the cost to the airport of extending the buffer zone to 240 metres against potential safety benefits.

The CAA should have also considered how much financial benefit the airport was set to get from the runway extension and whether that might justify more money going into safety.

The director should have based his analysis on the Civil Aviation Rules rather than the airport's proposal, the court said.

'A great day for pilots'

The New Zealand Airline Pilots' Association said it was "delighted with the decision", which upheld the earlier Court of Appeal ruling.

President Tim Robinson said it was "a great day for pilots, air crew, and the wider travelling public."

Most aircraft accidents occur during landing and take-off, he said.

"The risk of such an incident can be likened to the chance of a severe earthquake. Although the likelihood of an 'undershoot' or overrun is low when compared to the total volume of air traffic, the consequences can be catastrophic."

A landing overshoot at Wellington Airport would likely kill everyone on board and potentially drivers on the road at the northern end of the runway, he warned.

"While we need to take time to review the decision and consider our re-application to the Civil Aviation Authority, the Supreme Court's judgement and interpretation is encouraging and provides more guidance on what the CAA should take into account," he said.

"The Court has confirmed that Wellington's current 90m safety areas are fully complaint with the Act and Civil Aviation rules."