Analysis - Two years of arguing over a word has ended up in the Supreme Court, and its decision could have sky-high consequences for two of New Zealand's busiest airports. 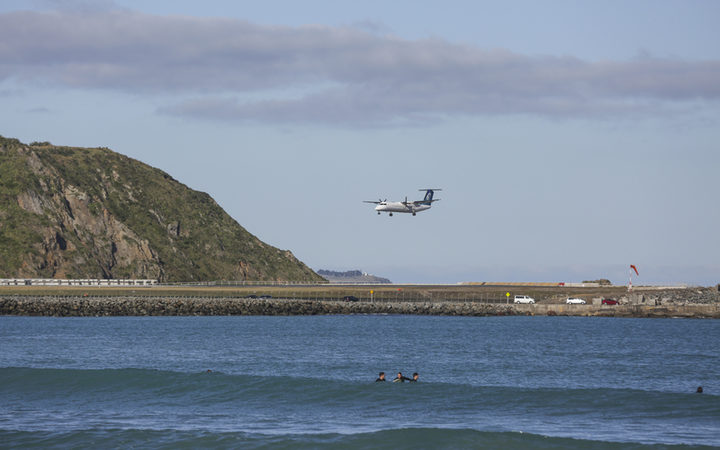 A plane heading into Wellington Airport: In Wellington, one of the runway's safety areas stands between it and the sea. Photo: RNZ / Rebekah Parsons-King

The battle over extending Wellington's runway has wound its way through the courts since 2015.

It was sparked when the Civil Aviation Authority director gave the airport's project the provisional go-ahead, saying it could be built with the minimum safety areas required under local and international law.

But the court's decision could have far reaching consequences for five airports, two of them international, making their runways non-compliant and potentially costing hundreds of millions of dollars. 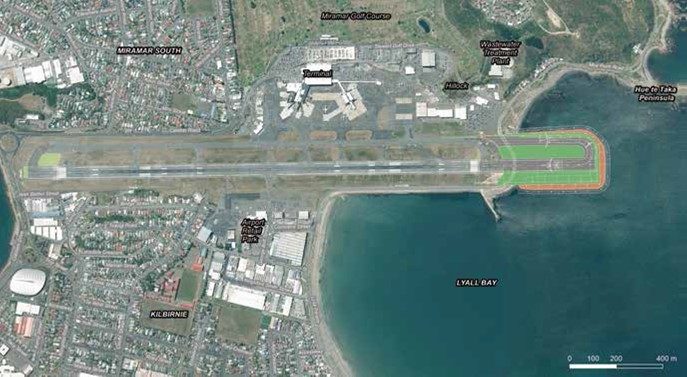 Wellington Airport with a rendering of the proposed extension Photo: Supplied

Wellington Airport wants to extend the southern section of its runway by 355m in a bid to attract long-haul flights from Asia and the Americas.

At the moment, the runway has 90m safety areas at either end - the legal minimum. The majority of accidents happen on take-off and landing, and safety areas minimise the danger of missing the runway.

Wellington Airport asked the Civil Aviation Authority (CAA) if it could stick with the 90m minimum if it got permission to lengthen the runway.

The extension alone would cost about $330 million, that's $930,000 per linear metre, with a commercial value to the airport of roughly $100m over the next 40 years.

It would, however, be economically beneficial for the region and the country as a whole, and public money would likely pay for the bulk of the project.

The airport said the cost of extending the safety areas outweighed the safety benefits - effectively doubling the cost of the project to prevent an accident that would statistically happen less than once every 200 years.

The CAA's director agreed that 90m safety areas were acceptable. 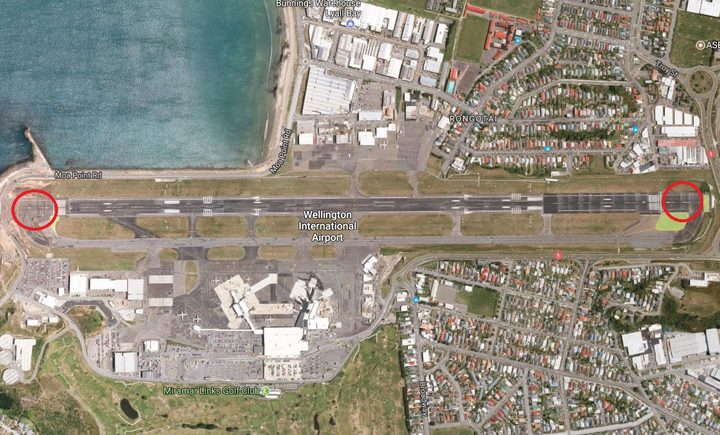 But the Airline Pilots' Association wasn't happy with that, pointing to a law which says the safety area "must extend" to 240m if "practicable" (more on this later).

It argued if the airport could extend the runway by 355m, lengthening the safety areas must also be physically possible.

The union sought a judicial review of the CAA director's decision.The High Court agreed with the director, but the Court of Appeal overturned that and sided with the pilots.

It said the director should have assessed whether a 240m safety area could feasibly be constructed, and told him to reconsider his decision. It also said he had placed too much weight on how much extending the safety areas would cost.

An artists' impression of the proposed extension viewed from Palmer Head Photo: Supplied

For two days last week, three of the country's top aviation and public lawyers wrangled in the Supreme Court. At the heart of their skirmish - the implications of the word "practicable"

That is, to remain compliant, those airports could simply re-paint the safety areas closer to the middle of the runway.

However, this would make the usable strip too short for larger aircraft to take off or land - effectively preventing jets for being able to fly in and out of Wellington and Queenstown, killing off trans-Tasman and Pacific flights.

A word can do that much?

At its core, this case is about how the CAA should interpret the word "practicable" in the context of the Civil Aviation Act. The act has the express purpose of "establishing rules of operation ... in order to promote aviation safety".

And the rule they're debating: that safety areas at the end of a runway "must extend" to at least 90m, and "if practicable" to at least 240m; or to the greatest distance that is "practicable" between the two.

Safety areas minimise damage to an aircraft should it run off the end of a runway, or land short. They keep passengers safe, and in Wellington stop the planes from crashing into the sea.

The former means those five airports would be operating outside the law and could have to spend hundreds of millions of dollars to become compliant.

The latter means they are operating within the law and their runways are fine.

What do they each think the word means?

Each of the parties told the Supreme Court how they thought the rule should be interpreted.

Wellington Airport argued practicable accounts for cost, and that 90m is safe. The CAA agreed, saying that relevant factors - cost, safety, ease of construction - should all be assessed on a case-by-case basis because every airport is different.

The pilots argued cost has only a limited bearing on safety, and practicable means what can be physically done.

They said the law required a starting point of 240m safety areas. Moreover, they argued the CAA director should also have considered crushable concrete pads at either end of the runway, in line with New Zealand's obligations under international aviation agreements.

As mentioned above, the Court of Appeal found cost was subordinate to safety, saying it was more about what could feasibly be constructed - an interpretation that would make five runways illegal.

Despite the possibility of the precedent it could set, Justice Glazebrook said the Supreme Court's sole focus was to interpret the law correctly.

"If the Court of Appeal's interpretation is right, then it's just a bit too bad that these are affected.

"We're not going to be basing a decision as to what the rule means on whether, unfortunately, some might or might not be compliant."

The Supreme Court justices will now weigh the relevance of cost to safety, and determine whether cost-benefit analysis is a useful tool for assessing whether a safety-related expense can be justified.

Highlighting the limitations of such a focus on cost, Justice Glazebrook said:

"[Having] some plane go off the end of the runway and killing everybody onboard at Wellington is not going to be of particularly good significance for New Zealand Inc."

The court's decision has been reserved.