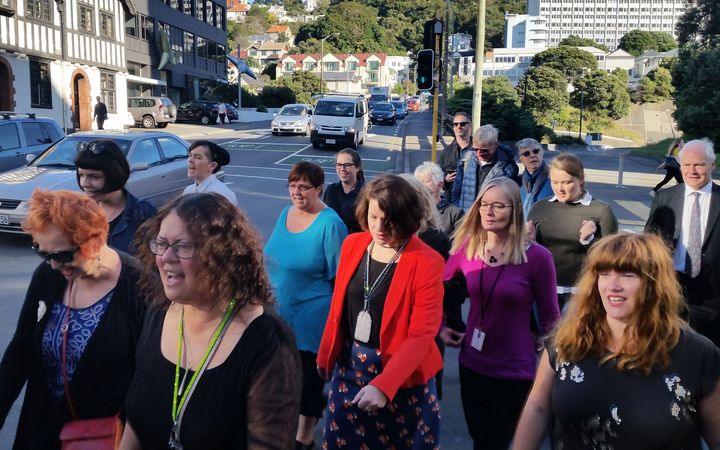 The women are employed by the Ministry of Education to assist teachers who have children with special needs in their classrooms.

That includes those with autism as well as behavioural problems and medical conditions.

The women say their work has long been undervalued but principles agreed last year, after rest home worker Kristine Bartlett won the right for such cases to be heard, have now made mediation possible.

Ms Bartlett successfully argued in court that her $14.32 hourly pay rate was the result of gender discrimination.

Today the women were accompanied to their mediation by about 50 supporters chanting "it's a glorious day for equal pay" as they marched.

One of the women, Kathy Power, said helping children with learning difficulties had been seen for years as nurturing work, or "women's work", and was not paid as much as men.

"Situations can change quickly from calm to storm in a couple of seconds," she said.

"You have to know the procedures but in the end what you are trying to do is to get the child to have a normal life."

New Zealand passed legislation on unfair pay for woman as far back as 1972.

Kristine Bartlett said she was thrilled that her legal fight had helped make progress on this issue.

"It's been a long battle and it's good to hear something positive coming out of it all. I just hope that it goes their way and they win what they deserve."

Today's march was supported by a high-ranking union official from overseas, Sharan Burrow, who is a former president of the Australian Council of Trade Unions.

"This is one of the most significant battles we can have," she said.

"A victory here would add to the inspiration and the momentum of victory everywhere. It's 2017 and it's time that the discrimination about women and the value of their work is simply ended."