While hundreds of volunteers prepare Christmas lunches for the less fortunate around the country today, some Christchurch kids have done their bit this week by hitting the streets to raise money for the homeless. 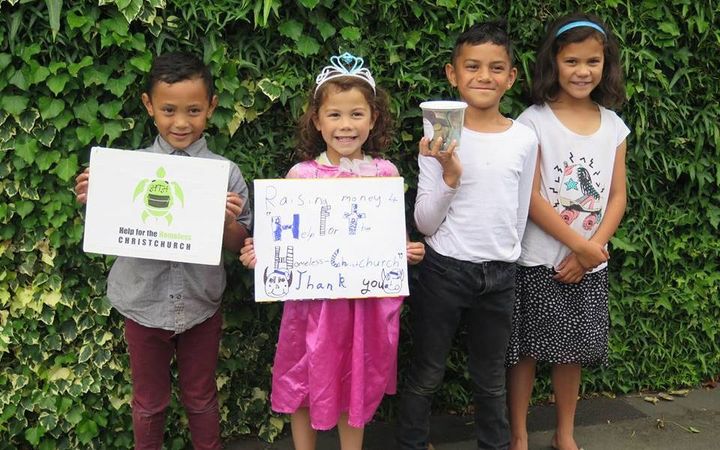 Massey (5), Nylah (5), Vaiuli (7), and Olive (7), were out this week, fundraising for a Christchurch homeless charity. Photo: Supplied

Two young girls have made a $300 donation to the homeless after busking with their cousins outside a supermarket.

Nylah, 5, and Olive, 7, teamed up with their cousins Massey, 5, and Vaiulu, 5, to sing some carols outside New World in Bishopdale.

The two girls decided to donate their haul to a Christchurch Facebook charity movement called Help for the Homeless. 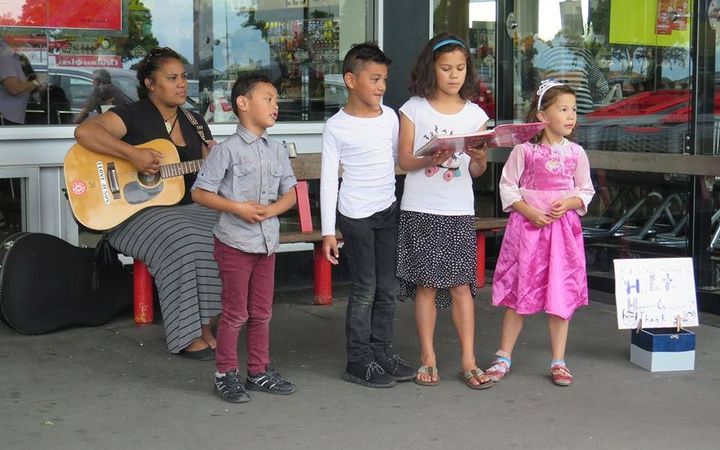 The kids out busking for Christmas charity. Photo: Supplied

Mother Leah Williams-Partington said the girls would always see people busking outside the supermarket and had always wanted to do it.

"It was a lot of fun, [the girls] loved it," Ms Williams-Partington said.

"They chose the charity and we just turned out and sang and are amazed at how much we made."

Instead of giving her girls chocolate each day from an advent calendar, she gave them activities to do to help others.

"We made up a little basket of goodies for a family that goes to my daughter's school who we know is struggling a bit.

"They were quite excited about getting some of their stuff together for that and we did some baking."

She said she also encouraged her daughters to compliment others and to be nice.

"Just really random but less focused on them receiving something and more about doing something for other people," Ms Williams-Partington said.

But she said the busking has "definitely been a highlight".

She said her daughters have learnt a lot from their experiences this month and have been less focused on themselves and have instead seen how fortunate they were.

Ms Williams-Partington said her daughters now had more of an "attitude for gratitude".

Mission for nutrition - feeding those in need

Chicken, ham, roast kumara, roast potatoes and all the trimmings - along with salads and desserts - will feed the 2500 people expected at the Auckland City Mission lunch today.

Among the people sitting down for a hot meal will be many of the 200 homeless people who live on the street within a three kilometre radius of the Mission's central Auckland building.

City Mission head Chris Farrelly said there would be a lot of children and several older people who would otherwise be alone.

He said the numbers of people accessing its services this year were similar to last year, which was a peak for the Mission.

Some volunteers were starting as early as 6:30am today to hang decorations, and Mr Farrelly said he was overwhelmed with the call for volunteers.

He said some even travelled from Waikato and Northland, all at their own expense, to help out.

Wellington's "Room at the Inn" community Christmas lunch will serve up 300 plates of festive fare today at the Aro Valley Community Centre, while about 600 people were expected to pack into Dunedin's town hall today for a shared community lunch.

About 700 people were also expected to attend the Christchurch Mission lunch today.

The city missioner, Michael Gorman, said about 240 volunteers would help to run the event, which starts at midday at Christchurch East School.

Santa was also set to arrive with presents for the children about half-way into the meal.

This will be Mr Gorman's final Christmas as missioner, as he steps down from the position next month.

Dunedin organiser Grant Hardy, said people from all walks of life attended, including newcomers to the area and those who did not have anyone to share Christmas with.

He described last year's lunch as the perfect day.

"We had a very wide mix of peple from all walks of life and it was just perfect. There were no issues, no problems, there was great harmony and a really good feeling amongst the people in the hall," he said.

For prison inmates, Christmas lunch would be the same as it has been for the past few years.

Corrections' deputy national commissioner Rachel Leota said it would be roast chicken and vegetables, with two slices of bread, followed by apple pie for dessert.

She said it was important to recognise the festive season was a difficult time for prisoners who were away from their family and friends.

She said the lunch still came within her department's $5.30 daily budget for feeding each prisoner, and also met the Health Ministry's nutritional advice.