The Auckland City Mission has made an urgent plea for donations in its busiest week of the year, saying they have been worryingly low in 2016.

As Christmas approached, about 350 families were coming to it each day in search of food and presents, the mission said. 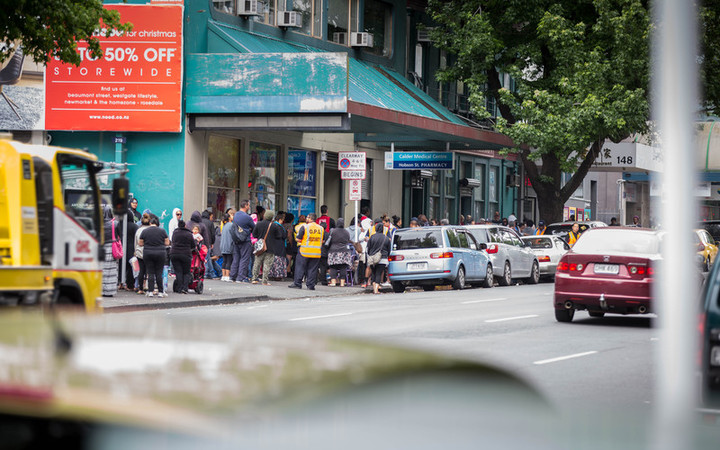 The line outside the Auckland City Mission today - less than a week before Christmas - started early in the morning. Photo: RNZ / Claire Eastham-Farrelly

Joshua, his wife, two-year-old son and nine-month-old daughter joined Monday's line about 7am.

"It's quite difficult to get down here before the numbers, but it is getting really bigger this year, it gets bigger every year."

They were just one of the hundreds of families seeking help from the organisation that day.

Joshua and his wife were living on a benefit. He was struggling to find a job, as he had criminal convictions, and she looked after the children.

With $380 of their benefit going towards rent each week, there was not much left over.

His wife, who RNZ agreed not to name, said they were living week to week.

"We're pretty much on a budget every week and when things like Christmas and birthdays come around it's pretty hard when it comes to having to buy extra things, food for the kids," she said.

"Trying to keep a smile on the faces because it's a diabolical time, eh, Christmas. But we're happy we're here. City Mission is really good for the people," Joshua said.

Past the line and into the 1850s former pub now hosting the city mission, there was a hive of activity as 200 volunteers did their bit.

Food parcels containing essentials like flour, and perishable items like vegetables and meat, were collected and carted out to waiting families.

Books and toys were sorted into gender and age range so they were appropriate for the children who would receive them.

It was the fourth year IRD worker Jaz Edwards had volunteered there.

"I've always had a passion to come here and help people ... it's pretty much like a family."

However, he said things had picked up over the years.

"There's a line that's going all the way down to Wellesley St. It's just picked up now but that's just one day, it's going to be like that for the rest of the week."

The city mission's regular work with the homeless, providing parcel support and signing people up for Work and Income, carried on amid the rush, which included preparing for a 2000-person lunch on Christmas Day. 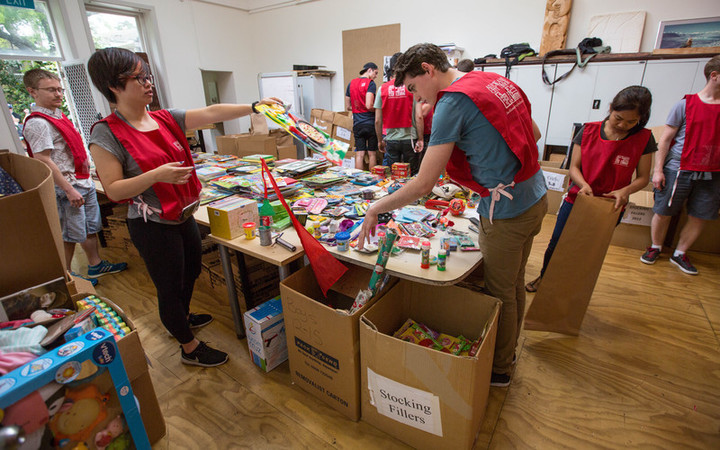 Auckland City Missioner Chris Farrelly said financial donations had been worryingly low this year, with urgent help needed to make it through the busy season.

"Frankly, just at the moment, we are really concerned about this week. We've got very, very big commitments, because we're actually having to buy a lot of the food in. In our family packs for food, we use the donated food, but they're set - so if we don't receive a particular food, we have to buy it to supplement. So there's big resource implications from that, we have extra staff on," he said.

"It's an expensive time for the city mission and we take this big leap of faith that somehow, in some way, we're going to make it to Christmas with the generosity of people." 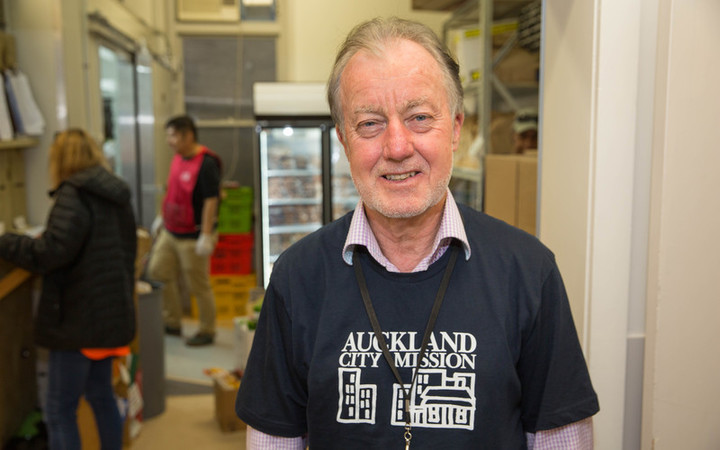 The mission said it needed $1.3 million this Christmas, but had only raised half of that amount so far. It was not sure why donations have been low this year, but pinpointed tough times for many and appeals by other charities, particularly after the earthquake, as possible reasons.

While the challenge of getting through the holiday season remained, longer-term challenges such as lowering the cost of living, particularly rent, were also on Mr Farrelly's mind.

Many lining up had to spend about 80 percent of their money on housing, he said.

"We don't want this to become the permanent way every Christmas and I'd like to be in a position one day where we don't have this outside. Then I know we've succeeded. Success is when we don't have that."

The Auckland City Mission is aiming to: