New Zealand will start talks with China to upgrade its free trade agreement. 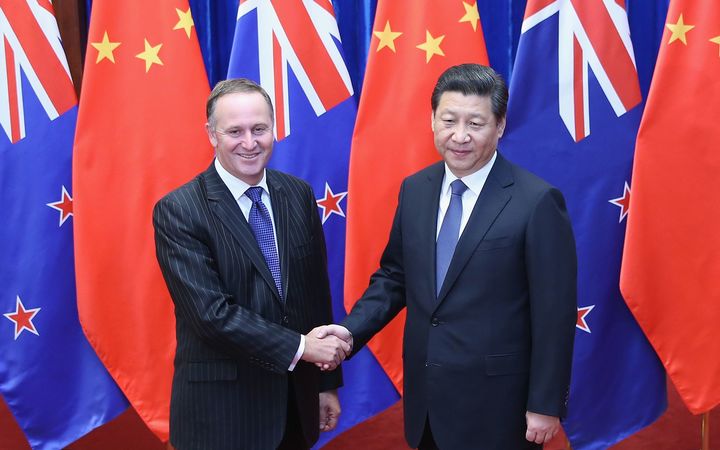 John Key with Chinese President Xi Jinping in Beijing during a visit in 2014. Photo: AFP

Mr Key said the negotiations would be an opportunity to improve or enhance the trade pact - which was now eight years old - particularly in areas like dairy.

Both countries are aiming to reach $30 billion in two-way trade by 2030, and Mr Key said an upgrade was needed to achieve that.

"We need to really upgrade that FTA and give New Zealand exporters better access across a wider range of products. So it's obviously a situation where we will look at the dairy safeguards, and the amount of dairy products we can get into China, but it's much broader than that and will include forestry and a range of other areas."

A first round of negotiations will start in the first half of next year, and will probably take about a year to complete, said Mr Key.

China is New Zealand's second largest export market for goods and services, totaling $12.2 billion in the year to June.

Since the agreement came into force, goods exports to China have quadrupled to $9.2 billion, and services have tripled to $3 billion.

Meanwhile, Mr Key said the countries involved in the TPP had met on the sidelines of the APEC summit and remained committed to the deal, despite United States President-elect Donald Trump's vow to scrap the trade pact.

New Zealand has passed the enabling legislation already, with another two due to do so by the end of the year.

Mr Key said all countries were aiming to meet the deadline of early 2018.

Some countries favoured having a TPP without the US, but Mr Key has said he was reluctant to go down that path.

The leaders of the 21 economies of the Asia-Pacific Economic Co-operation forum, which was attended by outgoing US President Barack Obama, have just ended their meeting in Peru.

In their statement the leaders committed themselves again to free trade.

"We reaffirm our commitment to keep our markets open and to fight all forms of protectionism by reaffirming our pledge against protectionism through a standstill commitment that we agreed to extend until the end of 2020 and to roll back protectionist and trade-distorting measures, which weaken trade and slow down progress and recovery of the international economy."

But in his campaign pledges and public statements Mr Trump has given every impression he would introduce protectionist measures in the US. There is nothing in today's leaders' statement, despite President Obama's support, to stop Mr Trump doing so.

APEC has no international legal clout and leaders' statements only carry moral weight. Individual economies can continue to forge their own trade policies, as they have in the past.

Meanwhile, the leaders have also recognised that free trade and globalisation were not universally popular.

"The confluence of inequality in some economies and uneven economic growth, as well as environmental degradation and the risks posed by climate change, affect prospects for sustainable developmen and deepen uncertainty toward the immediate future. In addition, globalisation and its associated integration processes are increasingly being called into question, contributing to the emergence of protectionist trends."

The leaders said they recognised the recovery from the financial crisis of 2008 had been patchy, but that they remained committed to using all policy tools - individually and collectively - to strengthen the world economy.

"We will refrain from competitive devaluation, resist all forms of protectionism and not target our exchange rates for competitive purposes. We reiterate that excess volatility and disorderly movements in exchanges rates can have adverse implications for economic and financial stability."