New Zealand's winter still has a little bite to it, with a cold snap expected to sweep across the country tomorrow. 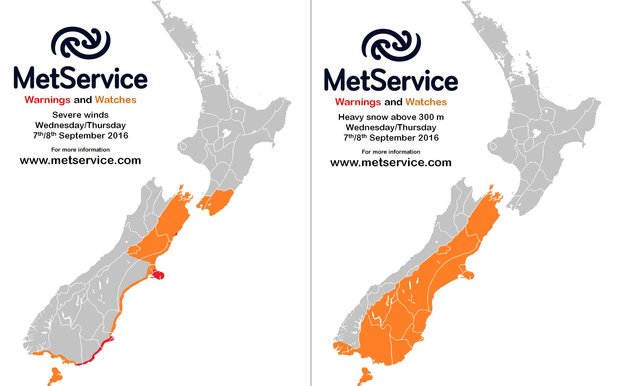 MetService is warning of a strong, cold southwest change tomorrow, which could create blizzard conditions in some areas.

The cold snap is expected to start spreading northwards over the South Island in the morning, before hitting the North Island later in the day.

A WATCH for severe winds for parts of central and southern #NZ Wed/Thur, and 4 snow above 300m for east South Is.^CF https://t.co/Po2yieBPR2

MetService said snow is expected to fall to low levels in the lower South Island and the strong winds could create blizzard conditions.

Snow is expected to fall above 200 metres in the south and east of the South Island during Wednesday, and possibly as low as 100 metres in Mid and North Canterbury during Thursday morning.

MetService said these conditions were likely to make driving difficult and affect stock that had no shelter.

Dunedin's electricity lines company has warned the strong wind gusts tomorrow might knock out the power.

Aurora Energy said the winds could bring down trees and powerlines, and create safety hazards.

The company has asked people to report all downed lines or trees in lines to Delta, and power faults to their retailers.