Around 400 properties remain without power across the Taupō Plains and in parts of Hawke's Bay, after wintry weather damaged power poles. 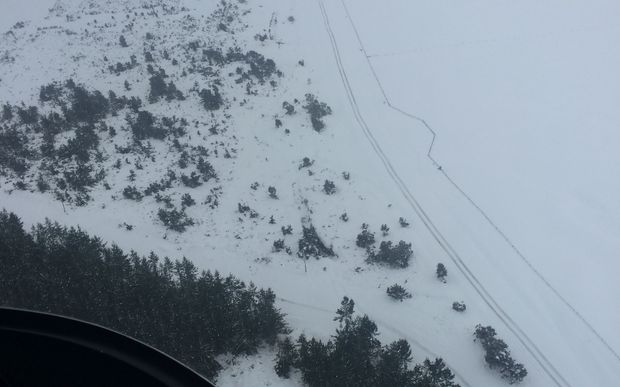 An ariel shot of SH5 at Rangitaiki looking towards Taupo. Photo: Riley Massey

Unison relationship manager Danny Gough said around 200 customers were still without power in the Taupō Plains region, and the teams had to wait for snow to melt or be cleared before a power restoration programme could start.

"Our affected network spans about 60km, all of which is covered in thick snow, and high winds blustering through the ranges.

"Along with the fallen poles, many are also broken, those poles still standing are twisted, and there are wires strewn across the landscape. It's real network devastation," said Mr Gough.

He said those customers would likely face be without power for about a week, and the team were working with the community to keep them as informed as possible.

"We have started calling affected customers to urge them to make alternative arrangements and will continue that tomorrow. We have also been liaising with Civil Defence, Federated Farmers, Dairy NZ, and Rural Support."

Mr Gough said Unison would also be looking at where generators might be of most benefit to the community.

He said dairy farmers who were still milking should organise portable power generation if they could.

If you're affected by the weather, and would like to share pictures, comments or video with us, please email them to: iwitness@radionz.co.nz

An aerial assessment in Hawke's Bay has confirmed there is severe damage for network areas that feed customers in Tutira, Pohuka, Puketiri, Esk Valley and Otamauri.

"So we are urging customers to make alternative arrangements where they can, as well as reach out to wider support of family and friends.

"We have assigned about 10 gangs, as well as support from Centralines, across about seven sites to get restoration underway."

Mr Gough said about 20 poles were down and tough terrain in the region would be the biggest challenge.

He said they were working with Civil Defence to assess needs in terms of access, supplies and animal welfare.

The polar blast brought some some bitter overnight lows to the South Island. 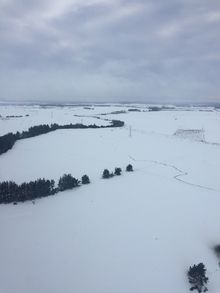 SH5 can just be seen under a blanket of snow at Rangitaiki. Photo: Riley Massey

There were no snow warnings for the South Island today. Snow showers were forecast for Southland and South Otago down to 200m.

Hawke's Bay had more snow overnight, falling down to 300m and falling as rain below that. In some areas of Hawke's Bay 113mm of rain had fallen.

MetService said conditions were expected to ease in Hawke's Bay.

Gisborne is expected to have snow down to 400m early today.

Several roads are closed across the central North Island.

The Napier to Taupo Road SH 5 remains closed because of heavy snow and is not expected to reopen before midday on Monday.

State Highway 2 between Tutira and Wairoa has reopened after being closed due to flooding.

In the South Island, drivers are being asked to take extra care due to snow and ice on the Lindis Pass, SH 6 between Kawarau Falls to Lumsden, SH 94 between Te Anau and Milford Sound, SH 85 between Omakau and Kyeburn, SH 80 between Aoraki Mount Cook and Ben Ohau and the Takaka Hill Road.