Primary school principals in Havelock North are reporting good attendance on their first day back, after being closed by the town's campylobacter outbreak. 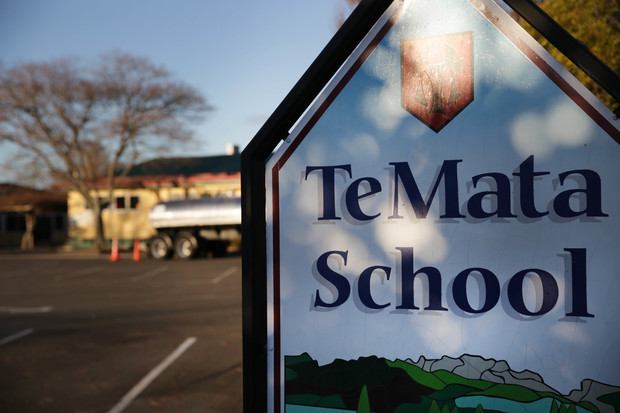 Te Mata School is one of the primary schools that is set to reopen today. Last Monday its roll of 600 was down to 250 as campylobacter took hold. Photo: RNZ / Rebekah Parsons-King

Staff and pupils were among the estimated 4100 people in the Hawke's Bay town who suffered from gastric illness, following the contamination of the water supply.

Te Mata School said it has 59 pupils, or 10 percent of its roll, away sick today, which was a normal absentee pattern for a day in winter.

Principal Mike Bain said there was a collective sigh of relief at the school this morning.

He said the outbreak had been frustrating on a number of levels.

"Getting the right information, getting it out in a timely fashion to our communities, trying to deal with miscommunication, that's been tricky," said Mr Bain.

He said cleaners were going through Te Mata School four times a day.

"All our water fountains are either isolated and shut down or they're covered. They've all got signage. We will start our day with an assembly around reinforcing those sort of practices and, you know, teachers will be on guard. Anyone who leaves the room to go to the loo, they're coming back and going through the third degree."

Nearby Havelock North Primary has 50 of its 550 students absent today and two staff away.

Principal Nick Reed said it was a better start than he anticipated and the biggest concern was the possibility of secondary infection.

He said one child had already gone home sick this morning.

Mr Reed, who has had the bug himself, said half the school roll of 550 was struck down and a number of children returned last week when they were still unwell.

"We did find on the Monday when we came back last week, there were a number of kids who were sent to school not in great shape and we certainly hope that doesn't happen (again).

"The frustration that families have really endured over the week, hopefully it doesn't force them to send their kids to school unnecessarily."

Boarders have been returning to the private boys school Hereworth, which caters for years 1-8.

Principal Steve Fiet said 150 of the school's 232 boys were off sick but he was hoping for some normality today.

"We hope it's business as usual. From bumping into families around the village, we know there are a few that are still showing some symptoms, and we've asked all families to the 48 hour rule in that if you're currently sick or had recent bouts of sickness that you remain away from school until that 48 hour period has passed."

Principals have been anxiously watching their budgets for relief teachers, who have been in short supply in the region.

The Ministry of Education said it would consider requests for help to recoup the unexpected costs.