Global warming is unequivocal and humans are extremely likely to be the dominant cause, the Ministry for the Environment has said in its latest climate change projections.

The ministry released its projections for the effects of climate change on New Zealand today.

It was based on the calculations from scientists at the National Institute of Water and Atmospheric Analysis (NIWA), who used a supercomputer to produce the projections from global climate models.

The report said hotter and drier periods were expected in coming decades, with more intense drought and a bigger demand on water resources.

Drought severity was projected to increase in most regions, with hotter temperatures in the North Island and more intense winter rainfalls increasing chances of flash flooding and heavy rain that could overwhelm urban drainage systems.

It found that modelling based on its most conservative estimate of greenhouse gas emissions would lead to temperatures in New Zealand rising by 0.7°C degrees by 2040, which would remain at 0.7° by 2090. 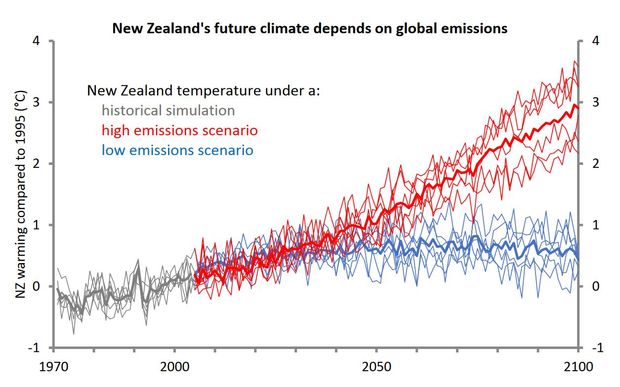 There would also be about 30 fewer "snow days" a year.

Among the likely impacts was an increase in summer mortality rates, business disruption, damage to biodiversity and transport infrastructure.

The report said there were now unprecedented levels of greenhouse gases in the atmosphere and there was already a long-term 0.9°C increase to global temperatures compared to the previous century.