Hundreds of people have slept in their cars overnight in south Auckland in a show of solidarity for the many homeless people in the city. 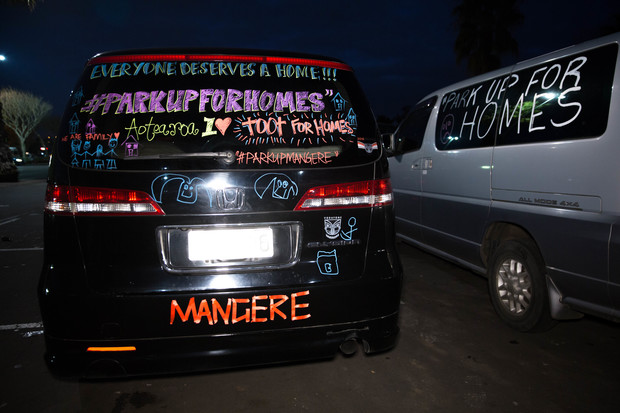 One young mother said she was motivated to take part because the homeless situation in the city was "crazy" and no one was doing anything about it.

Lea Togia, her partner and two children were one family who bedded down for the night in the Mangere town centre carpark.

After spending the night in her car, she said she had no idea how families did it for real.

"We were warm because there were so many of us in the car, but it wasn't comfortable, because there is no mattress, there's no bedding, there's just nothing. Because everyone is together, that's what keeps you warm. But it's not anything you would want to put your kids through.

She said as soon as the notice appeared on Facebook, she was determined to be part of the event with her children, five-year-old Jermaine and six-month-old Liam.

"We thought we'd come and help; make some noise, and get the government to give it some attention. Something they can't ignore."

Ms Togia and her family are living with relatives at the moment until they can save up enough money to get a place of their own.

She said it would be difficult for the children to sleep in the car, especially the baby who is used to having a cot to himself.

But Ms Togia said part of the reason for joining in the event is for her children to experience what it would be like to be homeless.

In the morning they would be following their usual routine, she said: her partner will be going to work as usual and her son will be going to school, just like the many people whose everyday reality is living in a car. 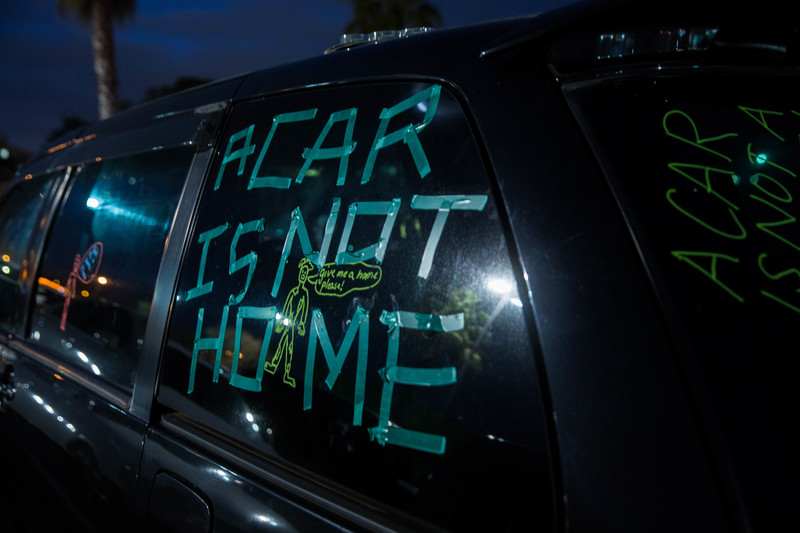 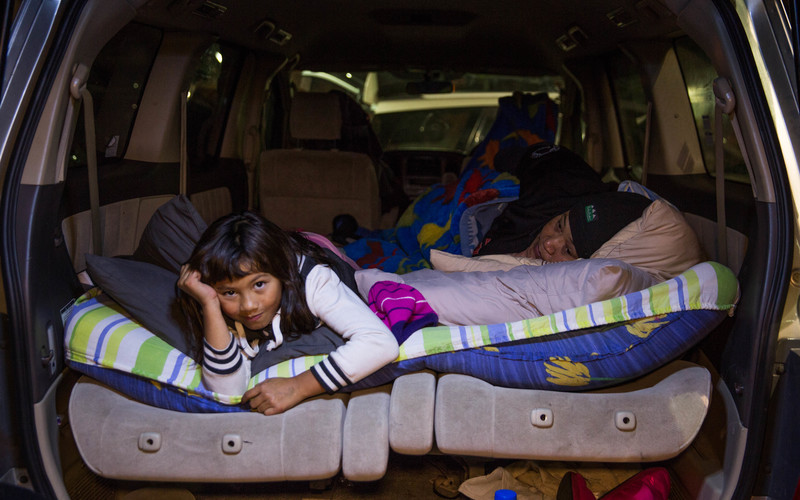 A family settling in for the night. 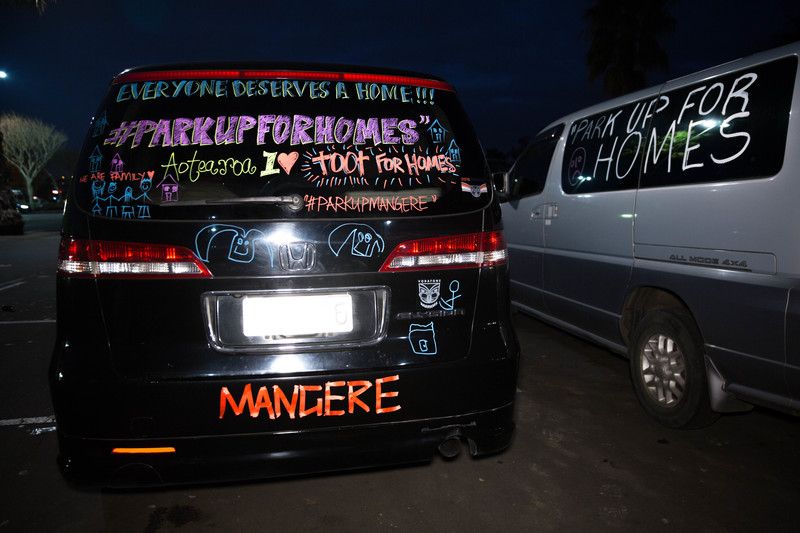 Cars were decorated with messages of support and solidarity. 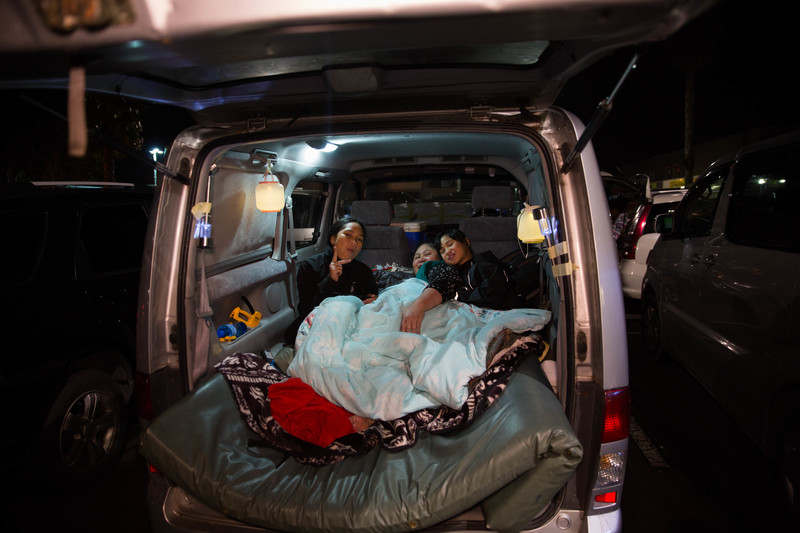 Plenty of blankets were brought to prepare for the cold night ahead. 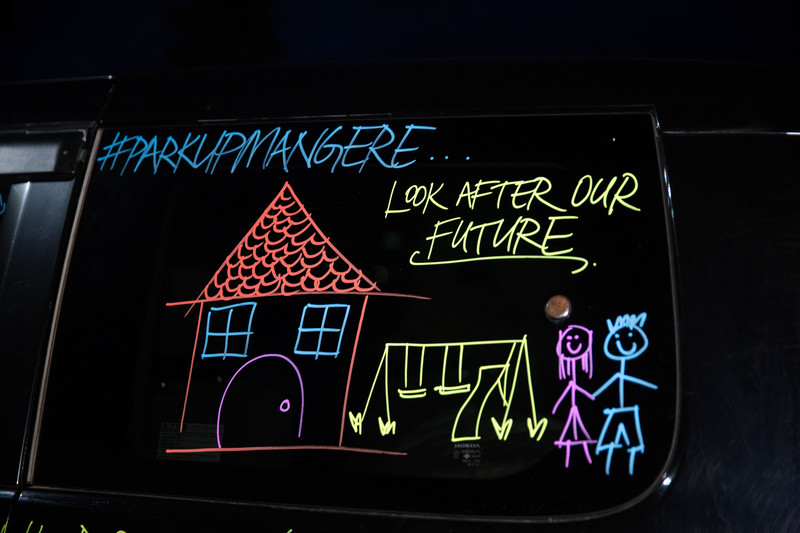 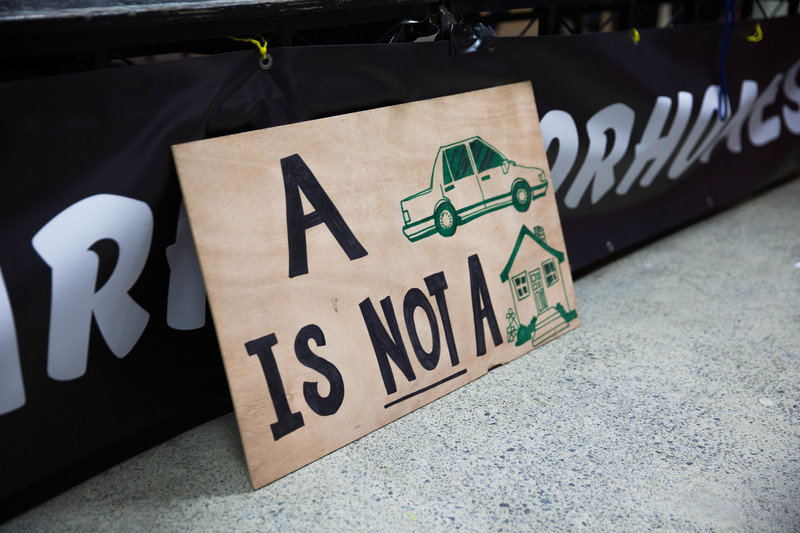 A car is not a home. 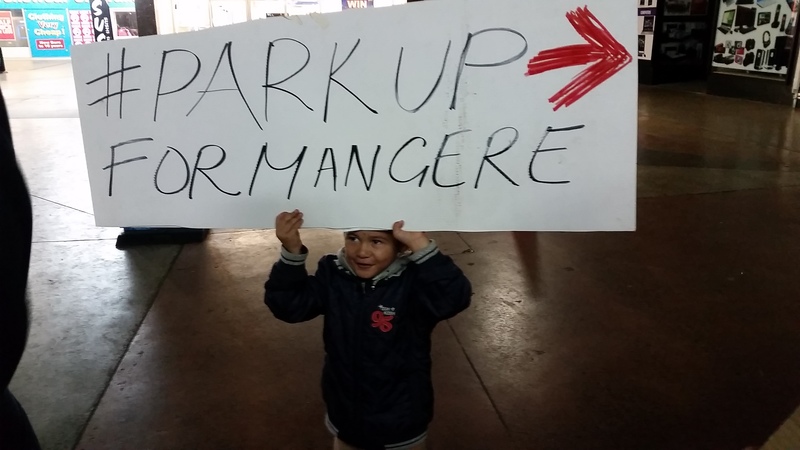 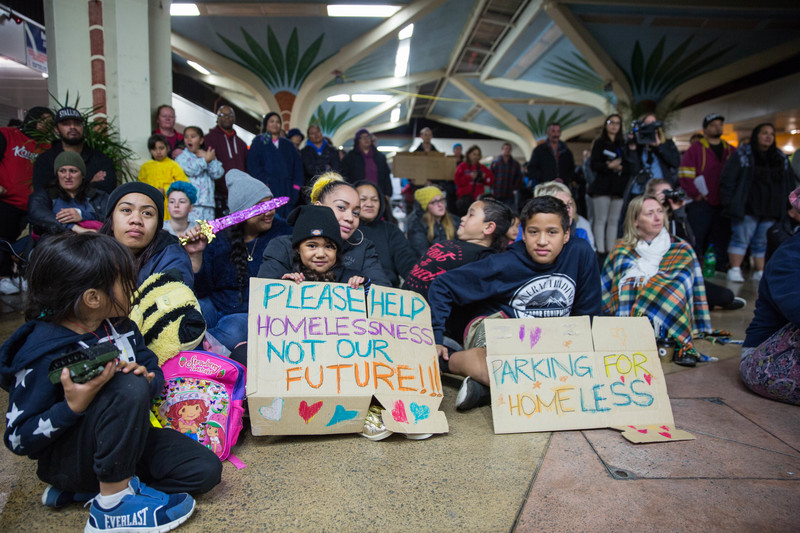 The crowds contained a large mix of people including many families. 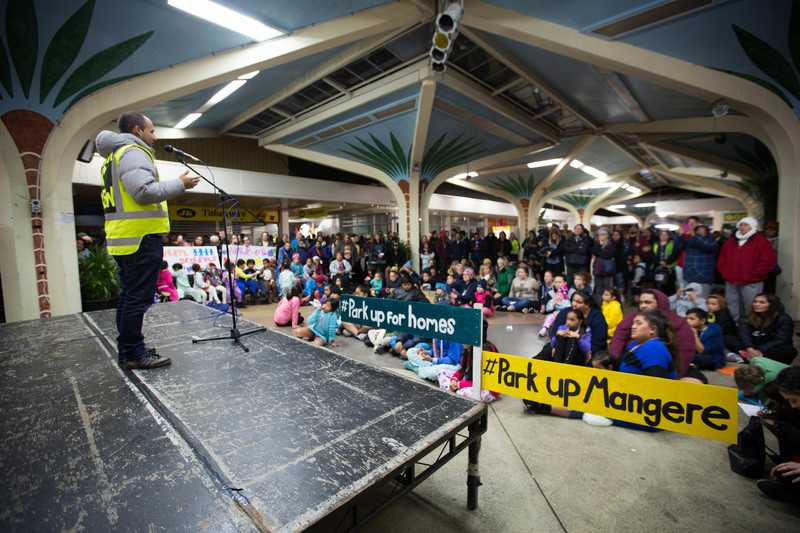 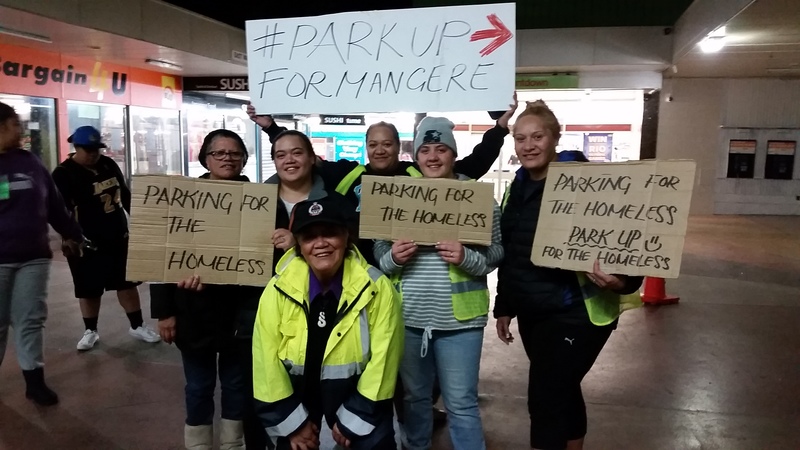 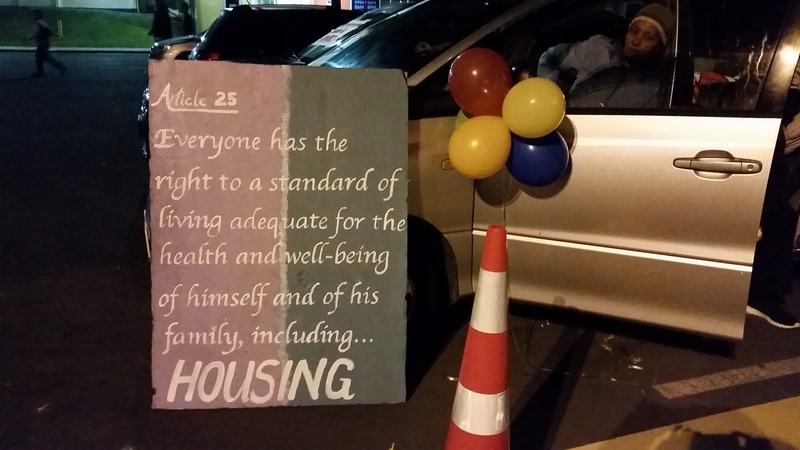 Messages of support could be found throughout the carpark. 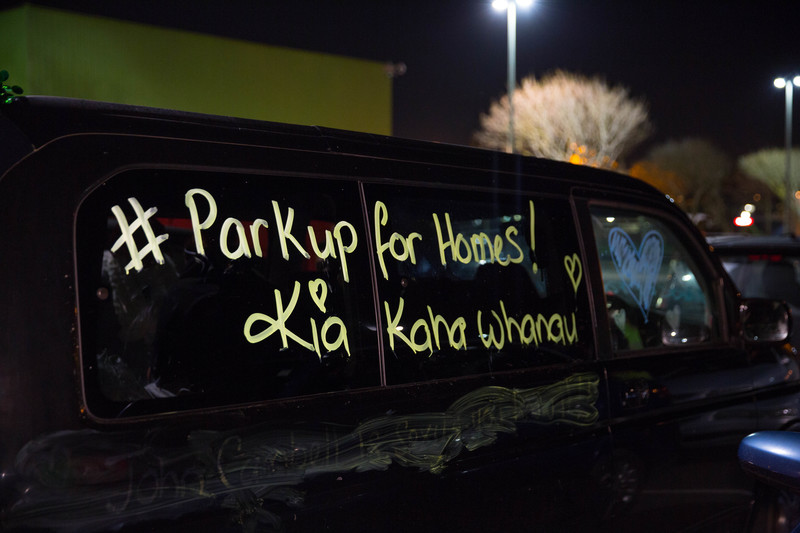 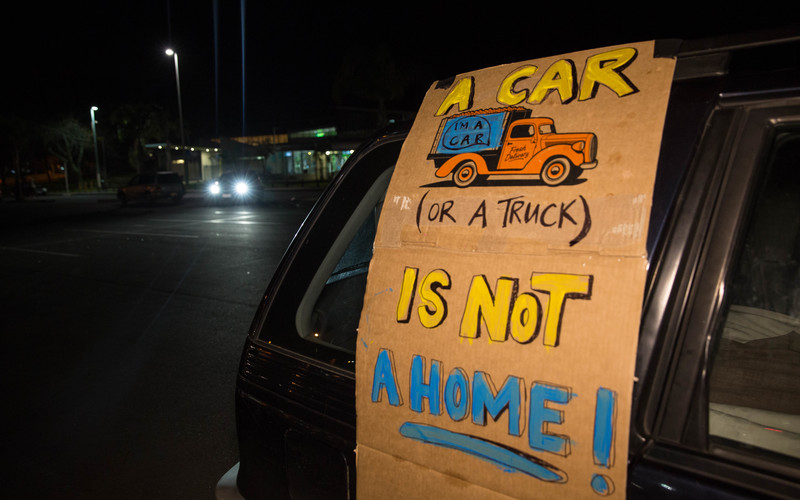 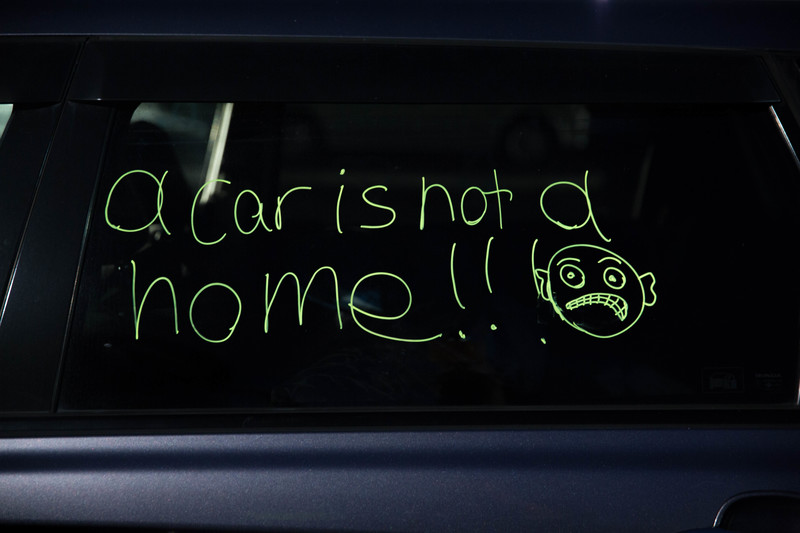 See a full gallery from the Mangere car park here.

Another mother, Georgina Ngatako, brought her children along to experience what it was like to be homeless and living in a car.

She was one of the first to arrive at Mangere Town Centre and got into the spirit, decorating her car with words of support.

"We are family" and "Everyone deserves a home" were just two of the slogans that many cars sported.

Ms Ngatako told RNZ News she lives in Mangere and joined the event because she knows personally what it is like to be in crisis.

"We've been in this situation before where we were just about sleeping in cars. We got moved out of a home and I had an eight-year-old and five-month-old. It's very important for our little ones to be housed. And I'm supporting all the homeless, how I was before, so I'm out with my family doing the same for them."

Organiser Justin Latif was overwhelmed by the support for the event.

When the idea was first conceived, he thought they would get 50 people, but instead there were hundreds.

"It's not about left versus right. It's about us altogether as Kiwis doing something and saying we deserve better as a country. Our small action tonight counts for something."

He said the aim was to keep the issue of homelessness in the spotlight and start the conversation of how the most vulnerable are cared for.

Mr Latif said more "park up for homes" events are being organised for Otara, Wellington, Hamilton and Pamerston North.