The first of the roadshows being held to explain the Trans Pacific Partnership was one-sided, an Auckland local board member says. 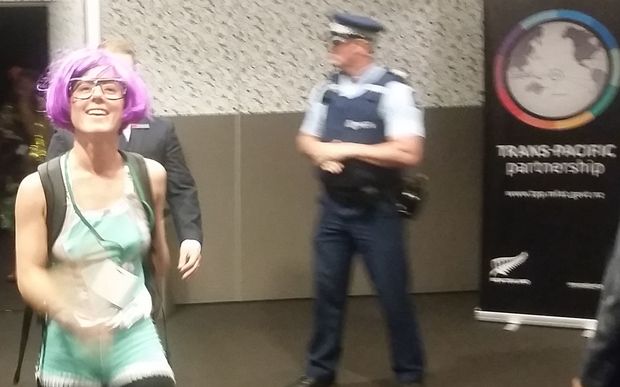 About 200 people, including businesspeople, supporters and opponents of the TPP, attended the public workshop at the Rendezvous Hotel in Auckland today.

Albert-Eden Local Board member Graeme Easte said the event was more of a show and tell, in which Trade Minister Todd McClay and the senior negotiator described what they were doing.

"It was very much pro the agreement," Mr Easte said.

"Even though half the questioners were clearly sceptical or anti, there wasn't really an opportunity for a discussion or a debate."

Aside from being advertised on the ministry's website, there was no real attempt to publicise the event so that more people could attend and voice their concerns, he said.

Today's meeting was disrupted by a small group of protesters popping balloons and laughing.

Chief negotiator David Walker was addressing the seminar when someone in the audience burst a balloon.

His address was stopped twice by mediator Sean Plunket, who asked for calm and called for a vote on whether the audience wanted those disrupting the address to stay or go.

Most people voted for the group to be ejected.

A small group, including people wearing clown noses and wigs, was taken out of the room. 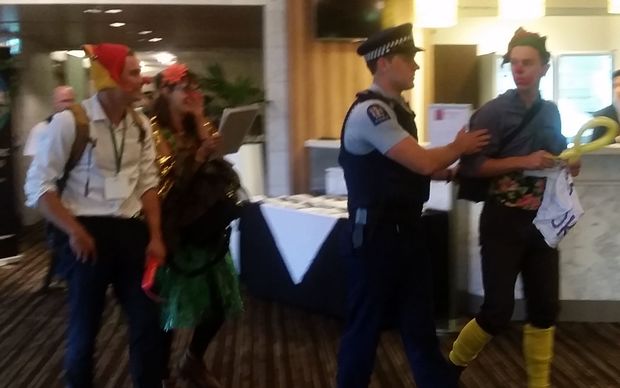 Trade Minister Todd McClay fronted up at the roadshow today to explain the controversial deal, which was signed by 12 member countries at Sky City in Auckland on 4 February.

Mr McClay said, despite a lot of criticism, the agreement was the most widely consulted deal the government had ever been involved in.

"But you've got to remember it's been over seven years or more of negotiation, so not all of that consultation or engagement will be remembered."

Mr McClay said over the seven-year period there had been public consultations, meetings, discussions and debates. 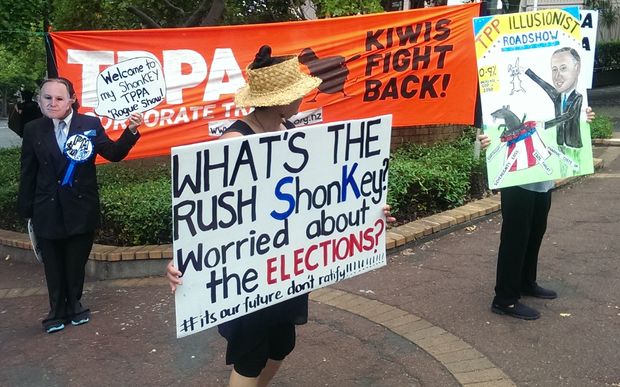 The roadshow, comprising 16 events around the country, was being held for two reasons, he said.

First, so the public could "come along and learn, listen, talk - voice their concerns and have a conversation".

But, as with any free trade agreement, he said it was equally to provide information to business and industry so they could be prepared and ready for the agreement.

Mr McClay said, once the agreement had been signed, the negotiation period was over. But the government would be listening, making its case for the agreement and explaining. 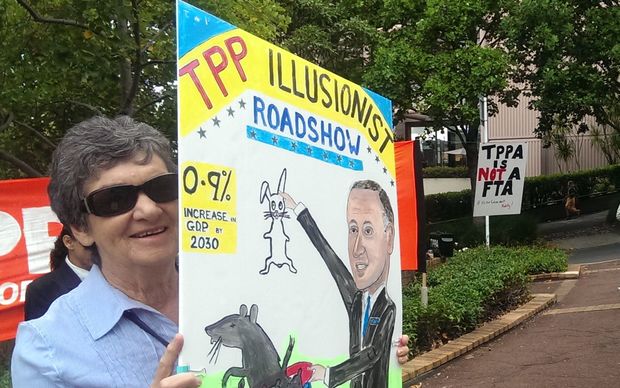 A protester holds a placard outside the roadshow. Photo: RNZ / Shannon Haunui-Thompson

"We now have parliamentary scrutiny which is over the whole of this year - so I have said I want to take all of this year through parliament as opposed to the three or four months normally," he said.

The Foreign Affairs, Defence and Trade Select Committee has called for public submissions on the TPP by this Friday, 11 March.

Standing orders require Parliament to examine international treaties that are subject to ratification by New Zealand.

The committee will review the TPP, the government's national interest analysis and public feedback, and will report back to Parliament in May.