Lobby groups are at odds over the secrecy that enveloped the Trans-Pacific Partnership (TPP) talks and whether the government did enough to ease public mistrust about the contentious agreement. 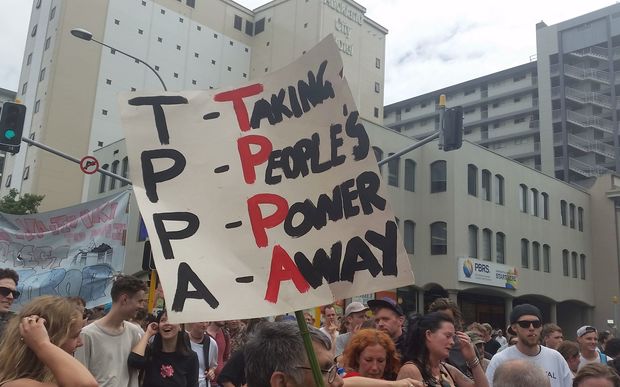 Thousands of protesters gathered in Auckland to protest the signing of the deal on 4 February. Photo: RNZ / Murielle Baker

While it's a done deal politically, Prime Minister John Key insists the government did consult enough during the five-and-a-half years of negotiations.

But controversy still rages about how useful that consultation was.

More on the TPP

New Zealand's chief negotiator, David Walker, has said anyone who requested a briefing received one.

That was true for the Dairy Companies Association of New Zealand and the Council of Trade Unions (CTU), which separately met with officials or negotiators at least a dozen times on the TPP.

But their views on the usefulness of those meetings differ markedly.

"They can't go into specifics, but nevertheless they would share where the problem areas lay." 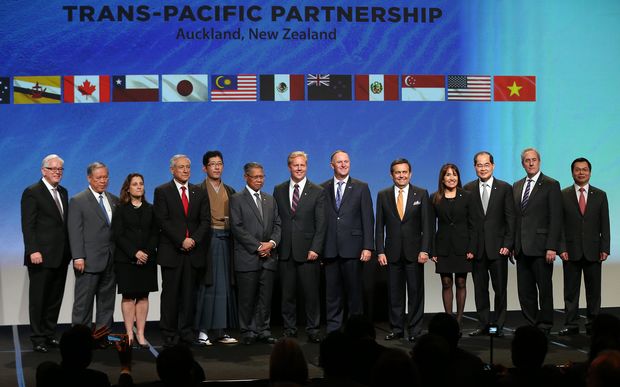 Prime Minister John Key, eighth from left, with the ministers from the 12 TPP countries. Photo: AFP

"The meetings tended to be fairly one way in that we would be asking them questions and putting our point of view, and on the whole, getting relatively little response as to where the negotiations were heading, and how our concerns would be met."

Dr Rosenberg admitted greater consultation was unlikely to have swayed the CTU's decision to oppose the deal.

But he said the government's approach was in stark contrast to the previous Labour government.

When Labour negotiated the China free trade pact, it set up a reference group that included unions, business and environmental organisations.

"That [reference group] received information on progress in the negotiations. Officials would also give detailed briefings on matters of particular concern and would consult quite intensively on particular matters at critical junctures.

"Certainly, it was a much closer relationship than for the TPPA." 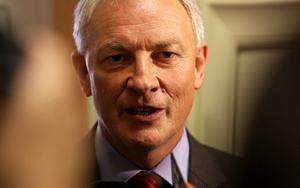 Labour MP Phil Goff was the trade minister at the time.

With concerns about job losses and weaker environmental standards, Mr Goff said his inclusive approach over the China free trade deal paid off.

"We bought the Council of Trade Unions on side. We made them part of our stakeholders' reference group. We brought environmental groups like Greenpeace on side by explaining what we were doing and why.

"Yes, that took a whole lot more effort but it's important in a democracy that you do carry your people with you."

Many of the thousands who protested at the TPP signing earlier this month weren't part of the "rent-a-protest" crowd, Mr Goff said.

The refusal of the previous trade minister, Tim Groser, to engage with the public and counter the claims of critics unnecessarily fuelled suspicion against the agreement, he said.

"The disdain on the part of the minister to answer critics of the deal, and to take the time that was necessary to win over people that weren't natural supporters of the agreement.

"I think Tim felt that be knew best."

Mr Bailey said, with hindsight, the government could have done more.

"[The] more information that can be shared through this process the better, and perhaps more could have been done.

"It's a difficult balance because you must retain your negotiating credibility by not divulging positions that you're not able to at that point in time."

The text of the TPP is now publicly available and the government has the political numbers to pass the deal.

But even its supporters might wonder whether a more open approach might have dampened some fears about the TPP, and widened its acceptance.