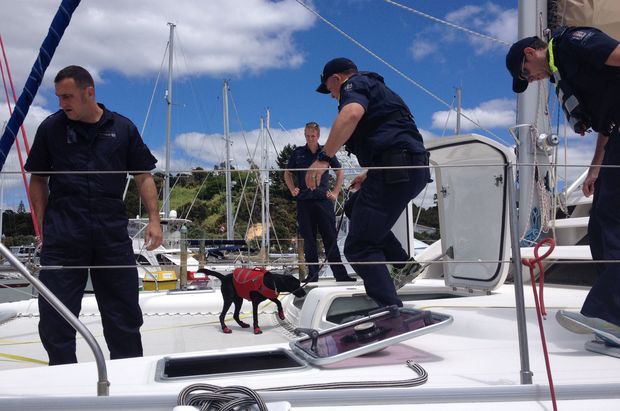 Sniffer dogs are being used for the first time to check yachts in Whangarei. Photo: RNZ / Lois Williams

Both proved to be male and no more were found. But the second discovery triggered a costly full-scale biosecurity alert, with the Ministry of Primary Industries moving staff and scientists into Whangarei for several weeks.

MPI says the fruit fly would devastate New Zealand's horticultural industry if it became established and is stepping up efforts to keep the pest out.

The ministry's detection technologies manager, Brett Hickman, said it was not known if the flies found in Whangarei hatched from fruit brought into the city on one of the many overseas boats that stay in the marina over summer.

However, he said it is a possible pathway and the yachts are now undergoing more intensive searches on arrival.

A team of quarantine inspectors instead of just one would check each of the nearly 500 yachts that arrive in New Zealand between Labour Weekend in October and December.

For the first time, MPI was using dogs to sniff out any fruit or produce that inspectors might miss. Mr Hickman said the ministry has built up 49 dog and handler teams from Auckland to Dunedin. They delivered the added bonus of speeding up the quarantine search process for visiting yachties - most of whom are keen to comply with New Zealand regulations.

Stu Raunsley, the ministry's northern region manager, said Air Force and Navy patrols have been increased this year to make sure that the boats head straight for one of the approved ports of entry such as Opua, Whangarei or Auckland.

MPI sent staff up to islands in the Pacific for the first time this year to make contact with the cruising fleet before the boats set out for New Zealand.

Mr Raunsley said New Zealand's biosecurity regulations are different from those of many other countries , and the yachties seemed to appreciate being advised in advance of their trip what they could and could not bring in.

He said the majority are law-abiding, and most forbidden fruit or beg found on boats is the result of forgetfulness or genuine error.

However, the ministry said so far this season it had found fruit on two yachts which it suspected was deliberately hidden. It said that concealment had the potential to ruin New Zealand's horticultural industry and it was investigating with a view to prosecution.

Flouting the country's biosecuirty laws could result in a prison sentence or hefty fine.