The Ministry for Primary Industries says it's adding more layers of assurance to biosecurity in the wake of two recent Queensland fruit fly incursions in Northland. 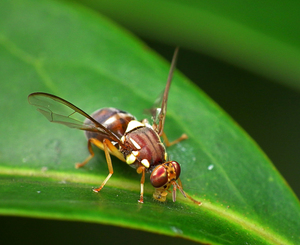 The acting director of border clearance said the ministry will increase the number of inspectors and dogs it will have monitoring yachts coming into New Zealand.

Stewart Rawnsley said while yachts are not considered by the ministry to be the most likely pathway for the two flies that did find their way there, they are still a potential pathway.

"It's more important for us now to look at where the most likely place is for the next one to come in from.

"The fact remains that these yachts do carry stores, that have potentially a range of pests on them and it could be meat, it could be fresh produce, fruit and vegetables etcetera, so that threat is still there and we need to make sure that our understanding of it is still current."

Mr Rawnsley said MPI would also pay extra attention to cruise ships and airports. The number of detector dogs has doubled to 40.

A male Queensland fruit fly was found in Whangarei in January and another of the insects was discovered at Parihaka in April.