A young Muslim candidate in the Porirua local body elections fears vandals who have burned, knocked down and stolen her billboards appear to be singling her out. 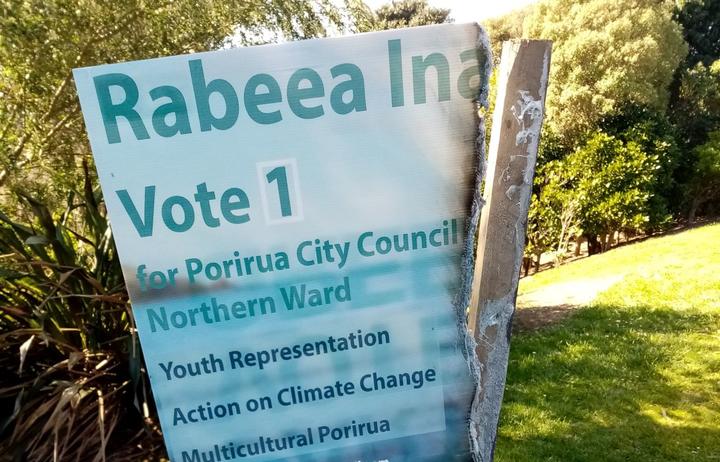 Rabeea Inayatullah, 21, said she did not want to think the vandalism was racially motivated but it seemed to be an ongoing campaign.

"When your signs are the only ones that are being vandalised and brought down when a bunch of other ones are not even being touched, you do jump to that assumption that you are being a bit targeted."

Ms Inayatullah, who is running in Porirua's Northern Ward, said the vandalism, especially in light of similar attacks against a Sikh candidate's billboards in the Hutt Valley, had made her more determined to push for change.

Hutt City Council candidate Shazly Rasheed had racist, sexist and anti-Semitic slogans and swastikas scrawled on her billboards, and was accosted when she went to fix them.

"My heart just really felt for her when I saw that, I told her I was proud of her for using this as her strength and fighting harder for migrants and minorities and inclusivity and diversity. That really resonated with me because that's what I'm standing for."

Ms Inayatullah said having her billboards destroyed had not put her off campaigning.

"If anything, it's made me more determined to push on. I want to put them up everywhere."

David Weinstein, who is helping manage her campaign, said he expected some vandalism, but they often found her's were the only ones that had been touched.

"Fortunately Rabeea is resilient and is taking the targeting of her signs with a good sense of humour, on the outside at least," he said.

"Standing as a candidate in local elections didn't used to be this challenging. But in today's environment where trolls, racist and sexist comments and threats go unpunished, it takes a brave person to put themselves out there in the public arena."

Meanwhile, it was costly and time-consuming for Rabeea Inayatullah and her supporters to check and replace the billboards, he said.