Five councillors walked out of the Gisborne District Council chambers after a resident refused to stop his tirade against Covid-19 vaccinations during a public meeting. 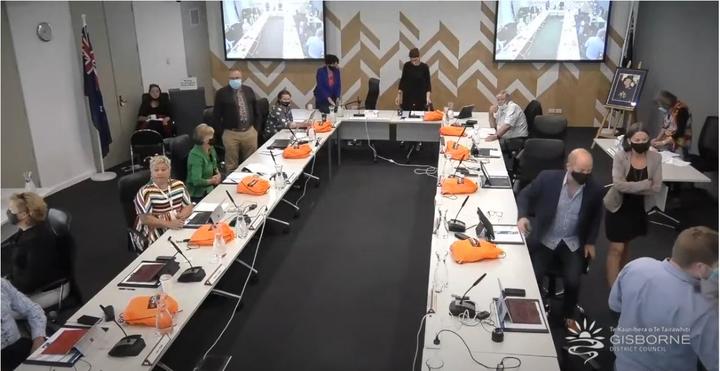 Mayor Rehette Stoltz said the resident secured a speaking spot at the Sustainable Tairāwhiti meeting on the ground that he was talking about sustainability. Photo: Supplied / LDR

Yesterday's meeting was adjourned five minutes in after Harvey Hutchinson launched into a speech against the vaccine.

Hutchinson opened his public deputation with brief mention of the Government's plans to charge ahead with Three Waters reform before veering to the vax.

"I'm just going to interrupt, this is not the platform," Mayor Rehette Stoltz said shortly after he began.

Mayor Stoltz adjourned the meeting and five councillors seated closest to the door left the chambers as Hutchinson kept speaking.

Tairāwhiti has the lowest vaccination rates in the country with just 61 percent of the eligible population fully vaccinated against Covid-19 and 76.5 percent having received one dose of the vaccine.

"You asked me yesterday to talk about sustainability, and what I'm feeling now is that you came in here under a false pretence," she said.

"I have to ask you at this stage, this is not the appropriate forum, I do it respectfully, and I respect that you have a different opinion, but this is not the forum to have these discussions."

Mayor Stoltz thanked Hutchinson and asked him to leave.

Gisborne Mayor Rehette Stoltz adjourns the council meeting and five councillors, right, make for the door. Other councillors turned away, while some continued to watch. Photo: Supplied / LDR

Hutchinson was supported by about 30 people, some of whom were unable to enter the council chambers due to the limit on numbers under Covid-19 Alert Level 2.

A statement from Mayor Stoltz later in the day urged people with questions about the vaccine to talk to their GP or with trusted friends who had been vaccinated, rather than obtaining information through social media.

She said it was disappointing that a group had deliberately misled her to secure a speaking spot at the Sustainable Tairāwhiti meeting.

"As a council, and as an organisation, we fully support vaccination as the best protection for our whole community.

"Please Team Tairāwhiti - let's look after ourselves and our community and vaccinate."

It comes as Hauora Tairāwhiti DHB contends with an anti-vax spam campaign that created more than 1300 fake Covid-19 vaccination bookings.