The "silent majority" in favour of the proposed $30 million civic facility in Masterton have banded together to speak up. 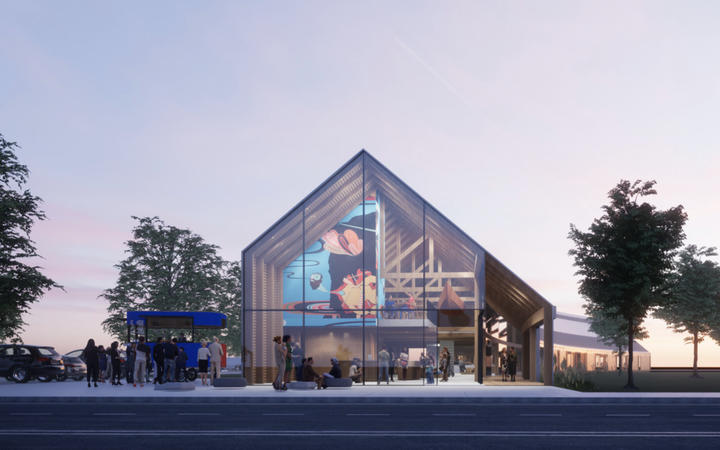 This week, a group was formed on Facebook titled 'We support a new civic centre for Masterton'.

Founder Nikki King said she created the group to be a "safe space" for Masterton residents to voice their support for the proposed civic facility.

Funding for the facility was signed off by councillors in June as part of the long-term plan by a slim majority [6-5].

The project has received vocal opposition, including from Masterton Action Group [MAG], which is petitioning to halt progress on the civic facility.

An hour before the long-term plan sign-off, more than 1000 Masterton residents took a stand against the proposed civic centre at the Hands Around the Hall protest.

MAG said it could not support a project with "no known site, no known design, and no known cost".

Earlier this week, councillor Graham McClymont, who chairs the civic facility working group, urged supporters of the facility to speak up, referring to them as "the silent majority".

King's group is giving them a platform to do so.

King, who is a local musician, businesswoman, and event organiser said supporters had felt intimidated by a "mob" mentality of people opposing the project.

She had been told to "pull her head in" when voicing her support for the project on social media.

She said councillors had also been "blasted" for supporting the project.

"We have so many class acts locally, and also great New Zealand acts that are bypassing our district because there is nowhere for them to perform."

She believed the proposed civic facility was the answer to this now and for future generations.

Her group supported the building of a new purpose-built facility in Masterton.

"We don't want to see the old building go, but instead be repurposed for something more suitable in that location."

Group member, musician, and events worker Ben Brunskill said he wanted an events centre in Masterton that would "spark some life, energy and community back into our town".

"I want this town where I live to take some bold steps away from 'it's too hard' and 'this it how it is' - we can be a rural gateway town that is fun and lively.

"Greytown and Martinborough have been thriving, Carterton has taken off. Masterton grows greyer, in my opinion."

Businessman and events guru Toby Mills said Masterton needed to be brave "like the people who built our original town hall".

"Masterton could be a fantastic small city to live in if we look forward rather than backwards."

"It's a huge investment and will be incredible if and when it is done correctly.

"Let's get creative and think of the larger picture well into the future."

Group member and artist Sam Ludden believed there was not enough information to pass judgement on the project.

He loved the old town hall's facade, but said the venue itself "doesn't function the way it could and should".

"I believe we need a civic centre at the heart of the town that not only enables but inspires our people."

The fate of the old town hall facade was saved by a vote last year by councillors, however the town hall and municipal buildings are earthquake-prone and must be strengthened or demolished by 2026.

MAG member and former commercial developer David Borman came out publicly this year saying the old municipal buildings could be strengthened and the town hall replaced for $15 million.

His plan included an 800-seat auditorium with 500 seats on the ground floor and 300 in the gallery, a multi-purpose hall with removable seats, a commercial kitchen, and a foyer fitting 150 people.

Featuring a glass exterior, an event space fit for 400 people was also in the Borman plan.

The Masterton District Council plan would include a flexible theatre space that seats 500 people and a foyer that could double as an exhibition space.

The civic facility would also include the library and archives with a footprint of about 2800m2, an information hub which included council services, i-site, Destination Wairarapa, and a box office, a pre-function come exhibition space, suitable kitchen facilities to support the event space, and meeting rooms.

These spaces would flow out, connecting with the outdoor surroundings.

When the site is confirmed, it would be publicised immediately.