One resident remains defiant as Eastern Bay councils prepare to officially end rights to live in the area of Matatā devastated by a debris flow in 2005. 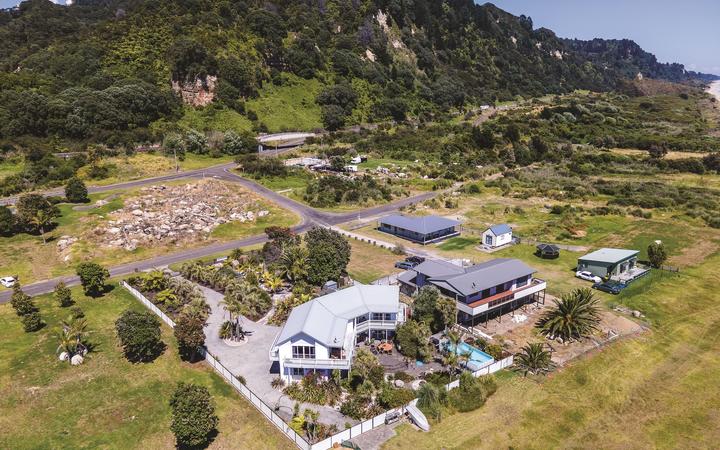 Several homes have already been removed from the Awatarariki fanhead. Rick and Rachel Whalley’s (front) will be the last to go. Photo: Whakatane Beacon / Troy Baker

The first of two plan changes to end all human habitation in the coastal neighbourhood of Awatarariki was formally approved by Whakatāne District Council today.

The Bay of Plenty Regional Council is expected to formalise a second plan change next week that will extinguish all existing use rights in the area - effectively making the last resident a squatter in his own home.

The man, who lives in a converted shipping container, has been staunch in his refusal to sell, or leave, his property.

The Whakatāne council has been seeking to remove all residents from the Awatarariki fanhead after the debris flow destroyed several houses in the community.

Through a managed retreat process progressed in partnership with the regional council and the government, the council has bought the other 33 properties. About half of these properties contained houses.

The strongest critics of the managed retreat process, Rick and Rachel Whalley, who gave up their Clem Elliott Drive home late last year after years of bitter wrangling with the Whakatāne council, sent a strongly worded email to district and regional elected members, members of Parliament and media ahead of Thursday's meeting to formalise the first plan change.

In the email, the Whalleys say the plan changes are forcing them to leave their Matatā home that was built by Rick's late father, Bill Whalley.

"We considered speaking to you all at the public forum but know from the last three years that this avenue is a waste of time, and there is nothing else we can do to change the situation you have forced upon us," the Whalleys say in the email.

"However, we still have concerns that we need to voice and ask that you please take the time to read this email and our affidavit that was presented to the Environment Court in December and understand the coercion and duress our community has been subjected to."

Concerns raised by the Whalleys include the parallel process of the managed retreat and the plan changes, which they feel prevented people from engaging with the Resource Management Act; that the community had no agency; that the process was not transparent or independent and that it had been a lesson in "how not to engage with a community". 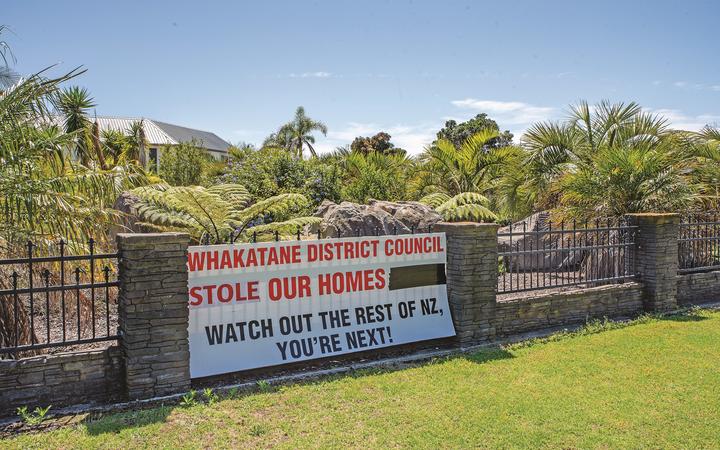 This sign on Rick and Rachel Whalley’s fence previously asked Whakatāne District Council to leave Awatarariki homes alone. It has now been updated to reflect the loss of their home. Photo: Whakatane Beacon / Troy Baker

They hope proposed changes to the RMA will ensure "other communities are safe from the treatment ours was subjected to" and intend to contribute to the government's consultation process on these changes.

When presenting the plan change to elected members at the Whakatāne council's strategy and policy committee, strategic projects manager Jeff Farrell, who led the managed retreat, was quick to assure councillors the Environment Court had already determined the Whalleys' involvement in the retreat was not coerced.

He noted the email "alleged coercion and duress" but there was none as deemed by the court as the couple had approached the council with a compromise that would allow them to stay in their home a full year longer than others in the community and had received independent legal advice.

Mayor Judy Turner thanked Farrell for his work during a "difficult journey".

She said it had been difficult for everyone involved and she hoped that the council never had to do it again.

"It was a sad decision to remove people, but it was the right decision made," Turner said.

Immink said if she had been on the council in previous years, she was not sure the council would be in the same situation.