Awatarariki residents have vowed to continue the fight for their homes after independent commissioners came out in support of Whakatāne District Council's proposed land changes. 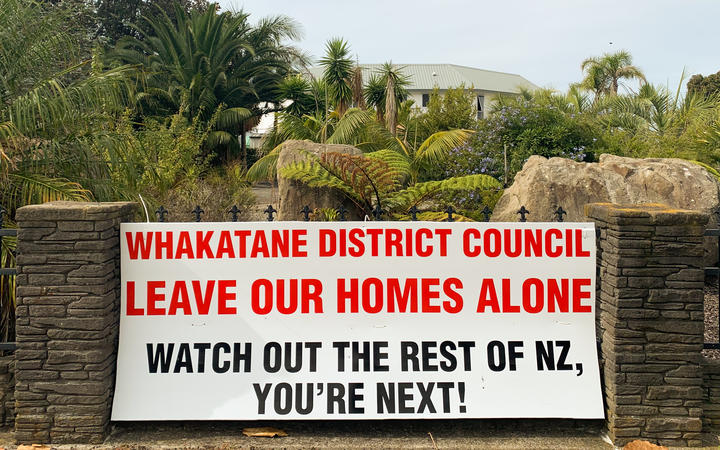 Awatarariki residents have vowed to continue the fight for their homes in the Environment Court. Photo: LDR / Charlotte Jones

The commissioners made their decision a month after they heard submissions from Awatarariki residents and the council about the potential fate of the catchment.

Following a debris flow event in 2005, the council decided the Awatarariki catchment at Matatā was too dangerous for people to live in and decided to use two plan changes to extinguish residents' existing use rights.

In today's decision, the commissioners rejected all submissions from Awatarariki supporters and accepted all from the council's 18 witnesses and legal representatives.

The decision will prevent future development on the fanhead area and extinguish existing use rights for those still living there.

As a result, residents must leave their homes before 31 March, 2021, at which point occupation of the homes will become unlawful.

Whakatāne Mayor Judy Turner said the first thing that had to be acknowledged was how long and challenging this process had been for Awatarariki residents and that it had gone on too long.

She said this was due to it being a unique process and the first time it had been done in New Zealand.

"The commissioners have accepted and reinforced the council's conclusion that there is a high risk to life and that this justifies our actions taken to date," Turner said.

The council has given residents the option of leaving their homes for compensation through its managed retreat process of which the council, the Bay of Plenty Regional Council and the government have each contributed a third of funding.

However, government funding is only available until the end of June and if residents have not finalised the sale of their property to the council by this time they may be forced from their homes with no compensation.

Turner said the council had extended the time residents could enter the process until 31 May due to the country-wide lockdown.

"The regional council, government and our council have made no provision for funding the retreat into the next financial year," she said.

"It was our expectation it should all be resolved by then. It cannot go on for much longer."

Turner said a drawn-out process would not be good for the wellbeing of those living at Awatarariki under high levels of stress.

Generally, people have 30 working days to make an appeal but Turner said this timeframe had been extended for Awatararki residents in light of the nationwide lockdown.

Their 30 days will begin from the end of the lockdown.

Awatarariki residents Rick and Rachel Whalley said they were disappointed at the decision but not surprised.

"We knew it was a forgone conclusion before the process even started," Whalley said.

"This is what we expected. The process was set up for us to fail."

The Whalleys said they and other Awatarariki residents now had to take the fight for their homes to the Environment Court where they would have the chance to cross-examine council experts.

They believe the Environment Court will provide a fairer playing field than the council's plan change hearings.

"We were hopeful it wouldn't get to this point, but we are not surprised it did," Whalley said.

"The plan change hearings were a stacked deck and we've planned all along for this outcome."

The Whalleys said due to financial constraints, they and other residents couldn't afford to mount a true opposition to the council's witnesses at the hearing.

Members of the Awatararki Residents Association have already sunk an estimated $40,000 into their fight against the council's plans for their homes and believe they will need to raise another $50,000 to $80,000 to fight it in the Environment Court.

Because residents' homes have been sterilised since the council announced its intentions for the plan change, they cannot raise loans against them.

They noted that all the council's experts and staff were paid to be at the hearings while they had to take time off work to attend.

"We were lucky our lawyers did a lot of work pro-bono," Whalley said.

"But, moving forward, we can't expect that from them long-term. We were lucky our lawyers could see the social injustice of what was happening.

"They have all the money, all the experts, what can you do?"

The Whalleys said their fight in the Environment Court wouldn't only decide their fate but possibly the fate of many people living in New Zealand.

"This case will set a precedent for the entire country," Whalley said.

"If this goes ahead, councils around the country will be able to kick residents out of their homes on a perceived risk, on something that may or may not occur.

"That's the wider angle of all of this."

The Whalleys have always maintained the issue should have gone straight to the Environment Court, before the managed retreat occurred, something they see as picking residents off one by one.

Residents who had accepted the council's acquisition offer were required to withdraw all support for the residents' association and those still opposing the process.

"We are a community under siege," she said.

"This is death by a thousand cuts."

Those wishing to donate to the Environment Court appeal can do so at the Givealittle page, E Tu Awatarariki Matata.