No one, including Whakatāne District Council staff, know what options there might be for Awatarariki residents who have not opted into the council's managed retreat. 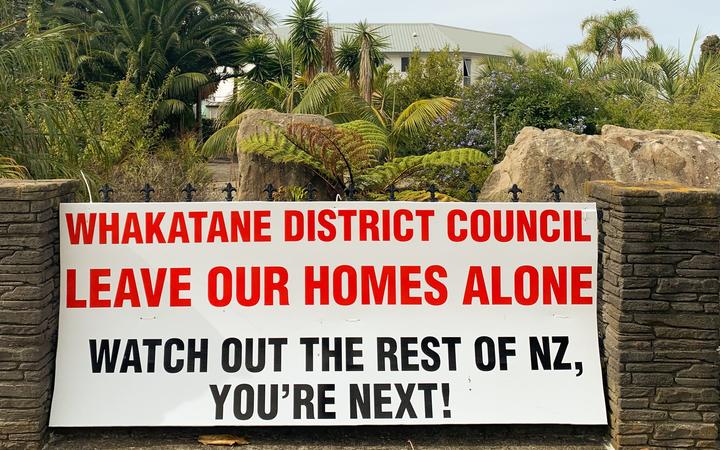 Some residents are not willing to go without a fight, as this sign on Rick, Rachel and Pam Whalley's fence attests. Photo: LDR / Charlotte Jones

In the third day of plan change hearings, being held at Eastbay REAP in Whakatane, the independent commissioners heard from council staff that the government's $5 million partial funding of the managed retreat was only guaranteed until the end of June and from there, it was unclear whether residents would receive any compensation for their homes.

The managed retreat is a scheme for some Bay of Plenty residents to have their homes valued and then be paid out so they can buy a home in a new area - away from the threat of deadly debris flows at Matata.

Council strategic project manager Jeff Farrell told the four commissioners the funding wasn't universally supported by government officials in the first instance and it was an "out of budget decision" to partially fund the retreat.

"I don't know what will happen if the programme is not completed by this time," he said.

Farrell said the council had spent around $8m of its $15m budget, made up of one-third contributions from the government, district council and the Bay of Plenty Regional Council.

He said any unspent funds by the end of June had to be returned to government and the regional council.

The commissioners asked if the two councils could then come to an agreement between themselves. Farrell said they could, but it would need to be through the annual plan process.

After two days of hearing from council experts, commissioners finally heard from affected residents of their hopes for their future.

There were many, including district councillors Lesley Immink, John Pullar, Gerard van Beek, Gavin Dennis and Victor Luca, who wanted to hear from the residents and there were more people in the public gallery than in previous days.

However, before the residents took to the stand, the commissioners heard from the last council expert, chief planner of Beca Group Amelia Linzey.

Linzey received pushback from the commissioners who felt her report on the social impact of the debris flow and managed retreat was lacking in detail and questioned why she did not speak directly to residents when drafting her report.

Commissioner Rauru Kirikiri raised concerns that Linzey's report relied on assumptions and said he was concerned about the effects the plan changes, managed retreat and debris flow could have on the Māori community.

"The nagging thing is that I need a real sense of the effect this is having on people's lives rather than paper," he said.

"We're dealing with people's lives; how do you measure that?"

Linzey said her brief was to simply review the material that had been prepared previously. In doing so she looked at consultation documents, social media and media reporting.

"I think the affected community can give you a much more human understanding than I can," she said.

Linzey said any social impacts from the residents leaving the fanhead would always be less serious than another debris flow regardless of whether they received compensation or not.

"In my opinion the loss of life outweighs the value people place in a property," she said.

When asked again why she did not consult with the community directly Linzey reiterated her role was simply to review work that had already been done. 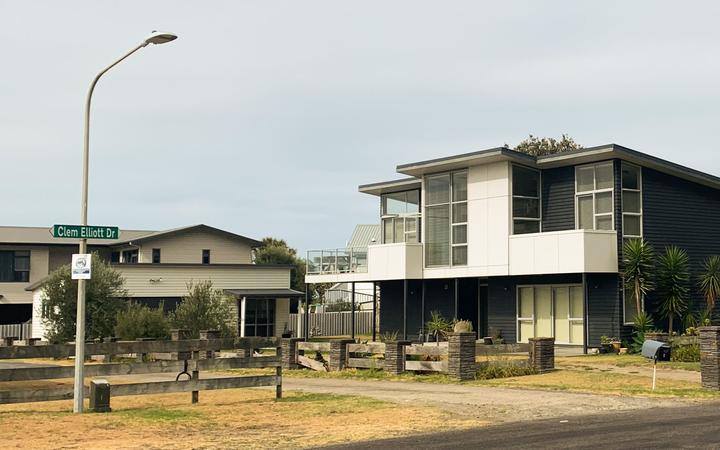 "As the council has failed to engage and listen to residents throughout this process, something reinforced by Ms Linzey not speaking with residents when writing her report as is the status quo, we thought we would reverse this process and let the residents speak first," said residents' barrister Rob Enright.

Pam Whalley addressed the commissioners first and gave an account of what she and her late husband experienced the day the debris flow occurred.

She described how they stood at the windows on the upper floor of their homes and watched as the debris flow "blew through" the embankment and railway lines before the debris, including boulders and trees, inundated the fanhead.

She said they opened all the doors on the upper storey of their home in case they needed to escape but the debris fell short of their home. Instead, their home was hit by a small wave of muddy water.

The only damage it received was mud under the garage door.

"It was frightening, but I was here for the 1987 earthquake, I was flying to New York the day 9/11 happened and I don't want to leave," Mrs Whalley said.

"I'm not scared, when it rains that doesn't worry me. I don't feel unsafe, I'm quite happy in my family home which I have lived in for over 30 years. Where do I go where I'm not in danger from tsunami, earthquakes, volcanoes? Where in New Zealand could you go?"

She told the commissioners she had self-evacuated from her home twice since the original event, during cyclones Cook and Debbie. She said she knew they were coming in advance and left the fanhead before they hit.

Her son, Ricky, told how residents felt bullied, intimidated and under siege from the council.

He said residents hadn't been fairly engaged in the process and key experts as well as government officials hadn't bothered to speak to residents when making decisions that directly affected them.

He said residents requested reports relevant to the council's decision over a year ago, but the council had refused to release them and the decision was now with the ombudsman.

He questioned how residents could make an informed decision without all the information and said it couldn't be a fair process if information was being withheld.

"We have no agency, no comeback, no mana," Mr Whalley said.

"My wife and I moved here from Taranaki, if this does go through and we do get kicked out, we may move back to Taranaki where there is a volcano estimated to erupt in the next 50 years. Can you please tell us where we can go in New Zealand where it is not high risk?"

Mr Whalley said new evidence showed an early warning system could work on the fanhead and that climate change would actually reduce rain in the region. "Why is that being ignored?"

Mr Whalley was asked by commissioner Rob van Voorthuysen why he felt the hearings were not sufficient and why he was pushing to take the issue to the Environment Court.

"We can't cross-examine the experts here and, while you're asking good questions, they're not our questions," he said.

"We respect you and your decision, but this has far reaching consequences for the whole of New Zealand and we feel that should be tested in court first."

Mr Whalley said were it taken to the Environment Court, residents could also apply for government funding for their legal fight, while during the hearings the entire legal cost was on them.

The residents' legal counsel then began their submissions. Barristers Rob Enright and Ruby Haazen's submissions stated that instead of flagging the entire fanhead as high risk, council should instead investigate each property on a case-by-case basis. If it did so, it might be found that not all residents had to leave.

Enright said the regional council had "overstepped its role"; the district council was taking a precautionary approach rather than a more internationally-accepted risk-based approach; the commissioners were not obliged to accept expert evidence; and that residents were under-resourced compared to the council.

"Life is not without risk," Enright said. "There are others facing similar levels of risk in Ohope, Whakatāne and Thames."

She said new evidence showed that an early warning system might work at Matata and climate change mapping showed the region would experience less rain and therefore a debris flow would be less likely to occur.

When facing the more technical questions posed by experts the two lawyers at times struggled to answer and said due to the financial constraints of residents' funding their own fight they were unable to call their own suite of experts like the council and instead had to find holes in their arguments.

Commissioner Trevor Robinson said if each home was given its own risk profile, residents might not necessarily be better off.

"They may not be, but equally they could be," said Enright. "That is an unanswered question."

Commissioner Kirikiri questioned how much local iwi had been involved in the discussions and the decision making around the fanhead.

"I don't comprehend the lack of interest from the Māori community," he said.

"If you are shoved out and forced to leave, it is the names that will remain behind. There is a cultural issue as to what those names will mean once you are gone."

Kirikiri asked who in the audience knew what the name Awatarariki meant, one resident raised his hand. He also said Keokaoroa Street was named for a famous battle.

Whalley said many residents' whakapapa to the site was through Ngāti Rangitihi and Ngāti Awa and he felt this was land confiscation all over again.

"My tipuna would be turning in their graves knowing I'm having to fight for our whenua again," he said.

The Whalleys' evidence was followed by Rob Welsh of the Matata Action Group.

Welsh said the debris flow had been caused by forestry slash building up in the catchment area and the council was negligent not to keep the stream clear.

He then launched into personal attacks on council staff and their experts. He accused experts of "colluding together" and said the hearings were "corporate BS".

He said he would sue the council and that was a "promise, not a threat".

Hearing chairperson Rob van Voorthuysen told Welsh twice that the hearing was not the place to air these complaints and asked him to provide a conclusion or summary of his evidence.

Welsh said he "could not be bothered going on anymore" before then saying it would be very easy to prove council's negligence in the matter and that it was attempting to fraudulently obtain residents' properties.

He also said the council had breached residents' privacy, kicked residents when they were down and breached their human rights.

He provided several photos of the logs which he said proved they were exotic and not native. "You don't have to be a rocket scientist to see that slash caused this," Baker said.

"My plea to you is to take this back to the top seat in the country and work it out there. This is a farce and you must throw it out."

Commissioner Fraser Campbell said a lot of evidence pointed to the logs being native and that there weren't many wilding pines in the catchment.

Baker said he couldn't accept that as he had seen it with his own eyes.

He said all the money ratepayers had spent on the managed retreat and hearings should be refunded and spent on a sewage scheme for Matata. "I don't like injustice," Baker said.

The council's lawyers had right of reply that afternoon but said they would prefer to reply to the "contentious" issues raised in writing. They said they would have their reply to commissioners by Monday.

Tomorrow commissioners will start their initial deliberations, which are not open to the public, before giving their decision in "due course"