It's more than three years behind schedule, more than $200,000 above budget, but now installation is in sight for the Hemo Gorge sculpture. 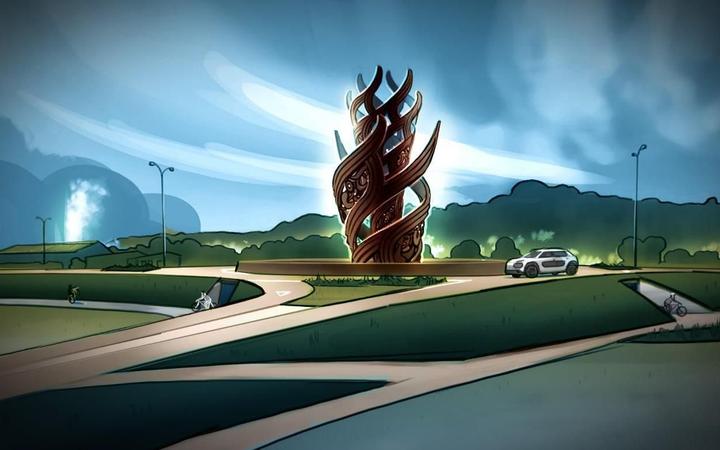 An artist's impression of Te Ahi Tupua that will be installed at a roundabout in Rotorua. Photo: Supplied / Rotorua Lakes Council

The 12-metre-high 3-D printed sculpture - named Te Ahi Tupua - was originally due to be installed in July 2017.

In March last year, council documents revealed the cost of creating and installing the sculpture had risen to $743,029, an estimated $204,361 overspend.

A council statement this afternoon said it would be working with Waka Kotahi NZ Transport Agency, Kilwell Fibretube and Te Puia to "map out the complex operation for installation".

"The teams are now relying on mother nature to provide ideal weather conditions to get the sculpture into place," the statement said.

The transfer was planned for the next fortnight, with the earliest day for transportation this Saturday.

"The helicopter operation is strictly weather dependent so while preparation is under way for the earliest opportunity, changes to the forecast could mean transporting Te Ahi Tupua on another day."

That meant it was not exactly clear which day the sculpture would be moved until the morning of the operation.

The flight path would take the sculpture in two separate trips, and would avoid all residential areas. It would begin from 6.30am.

Finishing touches would be done on the sculpture once it was in place - work that was also weather-dependent. That work was expected to take "about two weeks" and the roundabout and shared paths underneath would be open during that time. 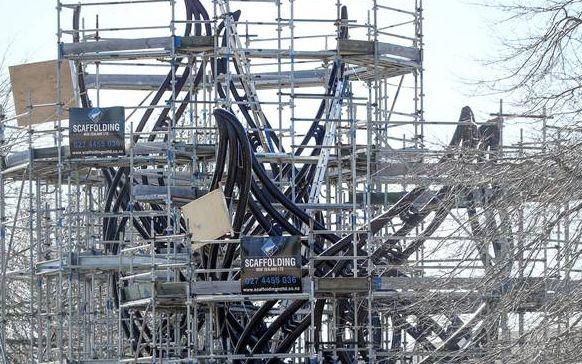 The sculpture under construction at its site in Rotorua earlier this year. Photo: LDR / Rotorua Daily Post

Kilwell Fibretube chief executive Craig Wilson told the Rotorua Daily Post he understood the installation of the structure was possible on the weekend but would be dependent on three main factors: helicopter availability, traffic approvals and management, and the weather.

"All three things that continually change."

The installation of the sculpture was due to take place last Sunday but those plans were abandoned as it was "a bit windy", Wilson said.

"There's still a bit on the go. We're still trying to get the ducks in a row."

Beck Helicopters managing director Alan Beck said the company would no longer be transporting the sculpture as it was "too heavy".

Council documents released to the Rotorua Daily Post stated that in November 2018, the sculpture was estimated to weigh about 3450 kilograms in total and would be transported in two parts.

"Kahu NZ has been engaged to carry out the transport part of the install. The change was to ensure the helicopter could comfortably manage the size and shape of the sculpture.

"Once the sculpture gets to the carpark at Te Puia, the helicopter will set it down and a crane will lower it into place within the roundabout."

Asked what the impact would be to the cost of the transfer and installation of the sculpture, Mikaere said Kilwell Fibretube was "responsible for the installation of Te Ahi Tupua including costs".

Wilson confirmed the costs were incorporated as part of a contract with the council.

Waka Kotahi NZTA had been approached for clarification on whether the camber of the roundabout - the subject of some controversy - was, or would be, under review.

The sculpture has attracted impassioned public debate, with numerous letters to the editor regarding the costs and delays of the project.

Designed by an artist from the New Zealand Māori Arts and Crafts Institute/Te Puia, it was inspired by the story of Te Arawa chief Ngātoroirangi, who was responsible for the safe passage of people to New Zealand.

Its construction was delayed after it was discovered only a limited number of companies in the world were capable of constructing the complex design.

It was originally intended to be made of stainless steel, but this was found to be problematic.

In late 2017 Kilwell Fibretube approached the council to 3-D print the sculpture, with the company estimating it would use more than 63km of PLA filament for the task.