Rotorua residents have flocked to the city's Covid-19 testing centre after it was revealed two positive Covid-19 cases travelled there at the weekend. 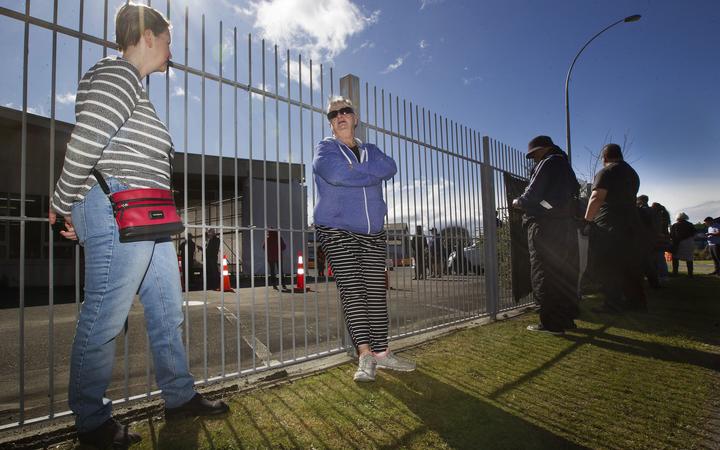 Michelle Bloor, left, and Maggie Waters wait in line to be tested for Covid-19 in Rotorua. Photo: Rotorua Daily Post

At a press conference at the Beehive this morning, director-general of health Dr Ashley Bloomfield said the two people had visited tourist spots in Rotorua and the Ministry of Health was working to establish exactly where.

A woman in her 20s and a child travelled out of Auckland last weekend to the city and both had subsequently tested positive for Covid-19.

Bloomfield said people in Rotorua would need to be vigilant. If there was another case in Rotorua a nationwide response may be necessary.

More than 100 people were at Rotorua's testing station in Vaughan Rd by midday, with testing via drive-thru as well as in person. 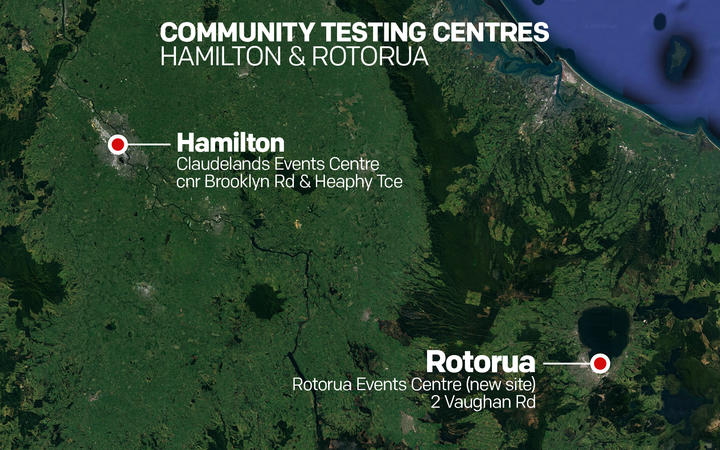 Most people were wearing masks and social-distancing, and there was a mix of adults and children.

Marshalls were in place directing traffic and people. Some cars were turned away when the line was too full. As one car tried to enter the line at the testing station a warden had to turn it away, saying to the driver: "Unfortunately, that's just the nature of it right now".

Doctor being tested 'to be safe'

Michelle Bloor, a doctor who works with the elderly, was close to the end of the in-person line. She'd been waiting for "about 20 minutes". She was getting a test to be safe, but she also had a sore throat.

Next to Bloor was Maggie Waters who said she was not symptomatic but was suffering from hayfever. She said she saw testing was free and thought she would "go in".

"I visit elderly people in retirement villages. Nothing ventured, nothing gained."

Rose Andrew, also in line for a Covid-19 test, volunteered on the weekend at Mokoia Island. "There was a church group there and some of them were from South Auckland. I thought I might just come get tested to be safe." Her mother and son were also in line as they had had dinner together recently.

Melita Foley was in line to be tested alongside her sons, Kahurangi and Rebel Johnson, aged 10 and 8 respectively. She said the two boys were staying with their father in Auckland for the last week. He called Foley late last night to tell her that Auckland would move to alert level 3 by midday today.

"I said 'what?' I didn't want [the boys] getting stuck in Auckland. I said bring them straight home. It's probably safer in Rotorua." The boys' father had left for Rotorua first thing in the morning, and Foley left work at Mitre 10 early to take them straight to the testing station. "It will protect the school and my work if we just get tested."

A Rotorua woman displaying Covid-like symptoms told the Rotorua Daily Post she was eager to get tested at the Vaughan Rd centre but was twice turned away this morning. The woman, who wished to remain anonymous, said she drove from Ngongotahā to Vaughan Rd about 9.20am but was told she would have to come back in an hour because the centre was full.

"I came back in an hour but got turned away again," she said. "You can only come in from the one direction and there is nowhere to park up and wait. They just kept saying it was too full. That's a long way for me to drive back every hour and check.

"I was in Auckland at the weekend and I have a sore throat, it feels like a cold coming on. I just want to get tested and have that reassurance."