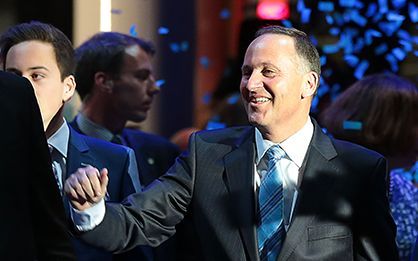 That trend figure includes the Fairfax Ipsos polls which consistently recorded much higher figures for National than the others and raised the question of whether the real poll trend pointed lower than 47.5%.

Either Ipsos acted as a corrective or there was a very late lift for National, which the New Zealand Herald DigiPoll did find some evidence of. This is known as the fish mouth in which the gap between two rival parties widens at the very end - as it did in 1969 and 1981, for example.

The trend pointed to Labour getting 25%. If Labour goes up by the same 0.3% between election night and the final count, that will be bang on.

The Poll of Polls got the Greens and New Zealand First wrong.

Explainer: The POLL of POLLS was an arithmetical average of the four most recent major polls, and was calculated regularly during the campaign, drawing from: TV1 Colmar Brunton, TV3 Reid Research, Fairfax Media-Ipsos, NZ Herald DigiPoll, Roy Morgan New Zealand and UMR Research (which is not published). The POLL of POLLS was compiled by Political Analyst, Colin James for Radio New Zealand.