National continued to slip in the final polls (all with end dates of September 17) to a four-poll average of 46.4%. That would still get it back into office on Saturday with the support of David Seymour of ACT and Peter Dunne of United Future -- and it would have in reserve the Maori Party.

There will be LIVE coverage of Election 2014 from 7pm on Saturday on RADIONZ.CO.NZ as results come in, with continuous updates, reports from across the country, and an up-to-the-minute graphic showing how the parties are faring against each other.

Now is the test time for the polls. Are their trajectories pointing towards the final result to be announced on 4 October? Saturday's result excludes special votes cast on the day, which can change party percentages slightly.

National's trends from 20 June and from 20 August to the latest interviewing midpoint of 15 September, projected forward five days to tomorrow, points towards around 47.5% on the final count. Take out 1%-1.5% to account for the overweighting of National by the Fairfax Ipsos poll by comparison with all others in most of its recent polling (but not the most recent): that would give 46%-46.5%. 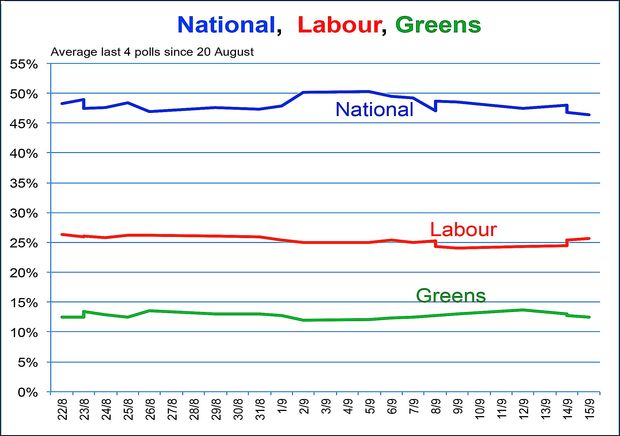 The latest polls took National's lead over Labour and the Greens down to a still healthy 8.2%. 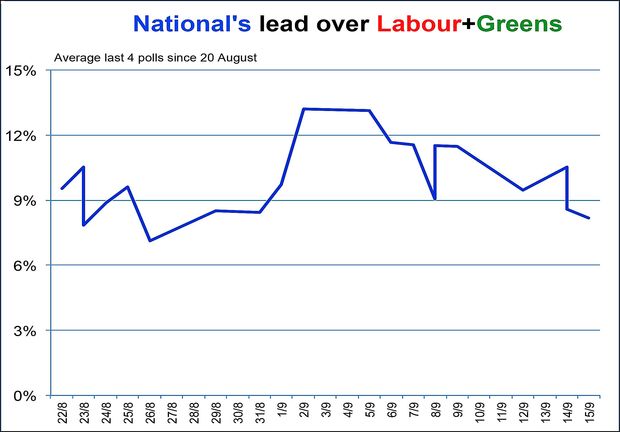 New Zealand First's trend from 20 June points to 6.5%. But, since most of its rise was in the past six weeks, the trend from 20 August may be more accurate. It points to 7.5%. The same last-six-weeks upward tick applies for the Conservatives. Their trend from August 20 points to around 4.2%. Internet Mana's downtrend points it toward 1.2%. 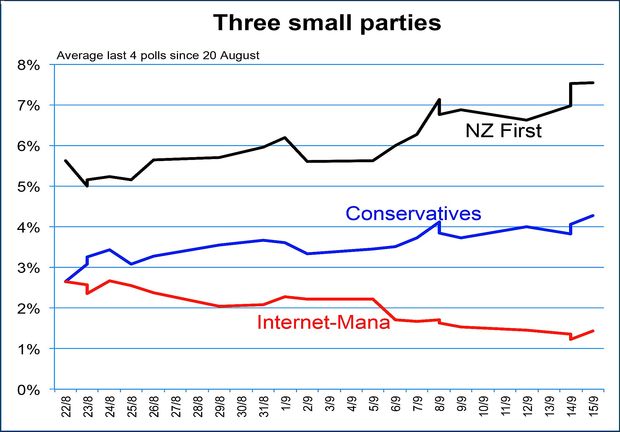 And here is how the latest poll average would translate into seats, assuming Seymour wins Epsom and Dunne wins Ohariu - and also assuming ACT gets at least 0.4% in the election and so a list seat but accepting that United Future is far short of that 0.4% barrier and its one seat would be an "overhang". The table also assumes the Maori Party wins Waiariki and Hone Harawira holds Te Tai Tokerau.

*The Conservative party has still fallen short of 5%, so is assigned no seats. ACT and United Future are assumed to win the Epsom and United Future electorates. ACT's 0.4% just gets it one quota. United Future has been so consistently far below the 0.4% hurdle for one quota that its one seat is treated as an "overhang", which accounts for the total being 121.

**The Maori Party has just enough party votes to justify two quotas, assuming it wins at least Waiariki. If it wins two more electorate seats the total would be 122, requiring a majority of 62. Hone Harawira is assumed to hold Te Tai Tokerau and so entitle to one extra list seat.

The poll of polls is an arithmetical average of the four most recent major polls since August 20 from among: TV1 Colmar Brunton, TV3 Reid Research, Fairfax Media-Ipsos, NZ Herald DigiPoll, Roy Morgan New Zealand and UMR Research, which is not published. The four polls included in the latest average were, in date order of the midpoint between the start and finish of voter interviews, TV3, New Zealand Herald, Fairfax and TV1.