National has lost ground in the latest polls - to an average of 47.5% - including yesterday's published polls by Reid Research for TV3 and Roy Morgan. That would still get it back into office on Saturday with the support of David Seymour of ACT and Peter Dunne of United Future, and it would have in reserve the Maori Party.

But just 2% further down would require John Key to deal with Winston Peters' New Zealand First, now sure to be in the next Parliament, or Colin Craig's Conservatives, still not 5% but rising. And, because the Ipsos poll for Fairfax has been consistently 4% to 6% higher than all the other polls in its National, it may well be that the real average is already between 1% and 1.5% lower than the nominal average.

The charts now go from 20 August, one month out from the election. We will look at the trends in the next update of the pollofpolls but so far from 20 August they have been flat for National, slightly up for the Greens and slightly down for Labour. 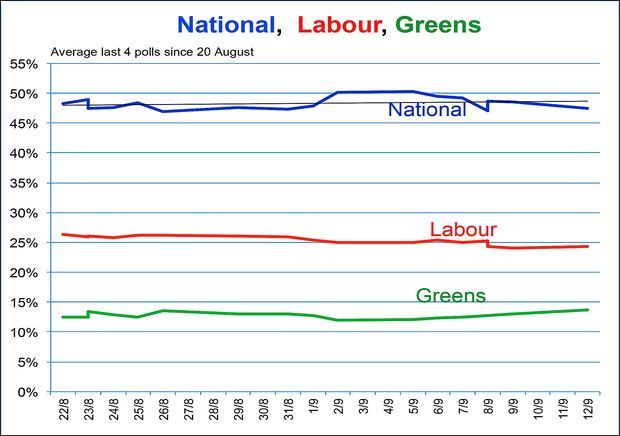 The latest polls took National's lead over Labour and the Greens down to a still healthy 9.5%. 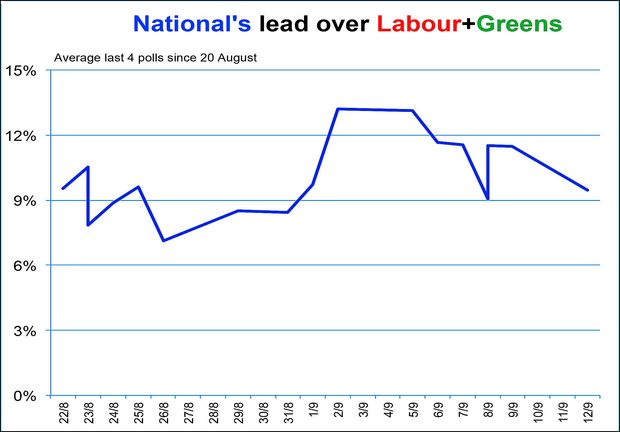 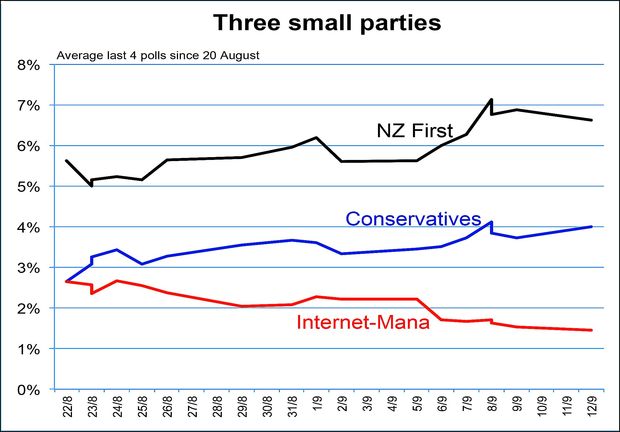 And here is how the latest poll average would translate into seats, assuming Seymour wins Epsom and Dunne wins Ohariu - and also assuming both parties get at least 0.4% in the election. If not, they would be "overhangs" and push up the number of seats in Parliament by two, requiring 62 for a majority. The table also assumes the Maori Party wins Waiariki and one of Te Tai Hauauru or Tamaki Makaurau, which recent polls have split near evenly between the Maori Party and Labour. That additional seat is an "overhang".

* ACT and United Future are both assumed to get above 0.4% in the actual election and so each earn a party vote quota. They would then between them add only one net seat to National's side because National, having nearly half the total party votes, would lose one quota. This is dealt with in the table by subtracting one seat from National to give it 60.

** The Maori Party is assumed to win Waiariki and one of Te Tai Hauauru or Tamaki Makaurau, which would be one more electorate seat than the total its 1.1% party vote entitles it to. That would therefore be an overhang seat, pushing the total seats up to 121.

Explainer: The poll of polls is an arithmetical average of the four most recent major polls since mid-June from among: TV1 Colmar Brunton, TV3 Reid Research, Fairfax Media-Ipsos, NZ Herald DigiPoll, Roy Morgan New Zealand and UMR Research, which is not published. The four polls included in the latest average were, in date order of the midpoint between the start and finish of voter interviews, TV1, Fairfax, Morgan and TV3. The TV3 midpoint was 12 September.