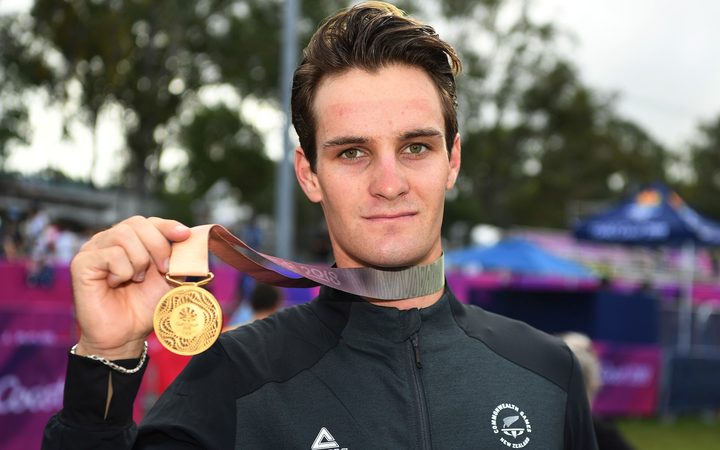 Gaze suffered a puncture while leading into the last lap of the race, forcing him to stop.

New Zealand's Anton Cooper and South Africa's Alan Hatherly, who were on the heels of Gaze when he punctured, passed the former leader, before Gaze powered back to squeeze past Cooper near the end of the final lap and take gold.

Post race Gaze accused defending champion Cooper of being a poor sport for not stopping to help his team-mate.

He has been fined 200 Swiss francs (NZ$281) by the UCI, the world cycling governing body.

Gaze said it was the first time in his life he had dealt with that kind of pressure.

"In the heat of the moment I made a call, that was not, in my words, what I would call manly.

"I am regretfully sorry about what that caused, and how it took away from that really special performance that we did."

Gaze, 22, said it was a great life lesson about growing up.

"I was a guy chasing my dream, and unfortunately made a gesture that spoiled what I did on a bike.

'I am sure he has learnt a lesson'

"I'll certainly give him the benefit of the doubt.

"We are going to see each other a lot in the future so it's a lot easier to get along then not....(but) you don't want it to happen too often because it shows someone's true colours so let's hope his apology is sincere.

"The problem is if it starts happening too often then (the apology) is obviously not," Cooper says.

"But I am sure he has learnt a lesson and I'm pretty quick to forgive and forget."

New Zealand chef de mission Rob Waddell said while what happened is disappointing, it gave an insight into how competitive and emotional the Games were for the athletes.

"I'm very pleased that Sam, very much on his own volition, has looked to try an make amends, he's been very genuine about that and very open so I think that's a strong move and I applaud him for doing that."

"In a team of 410 people...you get highs and lows, you get variances, but we're human right," Waddell says.

"I think that the positive thing here is actually recognising the mistake and moving on and that's exactly what I can see has happened. I think it's shown great strength of character for both of them, the way that they've handled it."

'No one ever stops in a race for anyone else'

Meanwhile, Kashi Leuchs - who competed in three Olympics and two Commonwealth Games in mountain biking - said there was no need for Cooper to stop when Gaze suffered a puncture.

"If you have a mechanical (issue), no one ever stops in a mountain bike race for anyone else.

"You wouldn't even say that in the end of a road race and road racing's got much more road etiquette like that than mountain biking."

He said the South African cyclist who won bronze would've taken out gold if Cooper had stopped Gaze to help him with his puncture.

Mr Leuchs said the pair raced together regularly and it was normal for their to be some tension as they competed - but his reaction after the win wasn't acceptable.

"Sam's just done the biggest victory of any New Zealander ever two weeks ago - and I put it miles ahead of his Commonwealth victory - by winning the World Cup.

"Why does he need to worry about this? It's still not worth being like that to anybody I would say."