Weightlifter Richie Patterson who won silver in Delhi, and gold in Glasgow, did not finish the men's 85kg division after failing on three attempts to clear 143kg in the snatch. 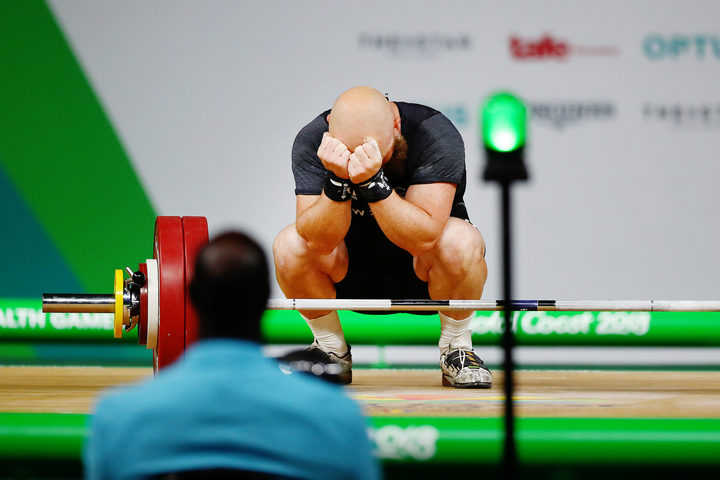 Richie Patterson of New Zealand is DNF (Did Not Finish) in the Men's 85kg Final after failing all three of his snatch attempts. Photo: Photosport

The four-time Commonwealth Games lifter was devastated when he spoke to reporters last night.

"We were being conservative coming in under 145kg," he said.

"I just felt disconnected on stage.

"I have been weightlifting 20 years this month. I am so proud to be part of this New Zealand team and so gutted this is how it ended up."

Weightlifting High performance manager Simon Kent said there was no inkling that Patterson would struggle with the weight.

Kent said he was still confident after first two failures that Patterson would get it on the third.

"Richie is an experienced campaigner and even after he missed his first two lifts I fully believed that he would be able to find the correction but unfortunately not tonight."

Kent said he lifted 140kg in the warm-up.

"Three more kilos shouldn't have made too much of a difference but again it changes when you're out there on the big stage.

"We felt like he warmed up really well, he looked confident but for whatever reason that walk between the warm-up room and the competition platform, something didn't quite click tonight."

Kent said Patterson, who was at his 4th and final Commonwealth Games, couldn't really explain what happened.

"When this happens to an athlete you tend to just let them go away and have some alone time.

"But Richie is a champion regardless of what happened tonight, it's an unfortunate way for him to finish his Commonwealth Games but it's certainly not a defining moment for Richie Patterson."