Myrtle rust has been found on a hedge in Ōtautahi-Christchurch, the furthest south an established infection of the plant disease has been seen. 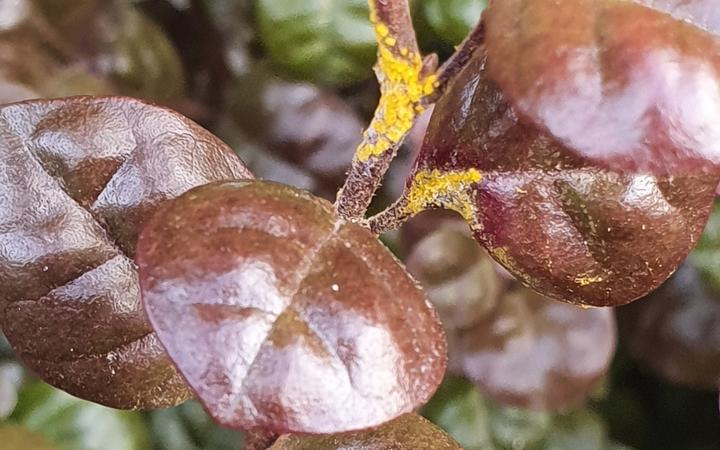 Christchurch had generally been considered a low-risk environment for myrtle rust which thrived in warm, moist areas. Photo: Supplied / DOC

Myrtle rust has been spreading rapidly across the country since it was first identified in 2017, attacking plants in the myrtle family including pōhutukawa, mānuka, ramarama, rōhutu, rātā and swamp maire.

Bad infections can be deadly for the plants.

Manaaki Whenua Landcare Research said the disease was most frequently seen across the North Island and the top of the South Island.

Christchurch had generally been considered a low-risk environment for myrtle rust which thrived in warm, moist areas.

It said previous sightings of the disease in the Christchurch area had been on plants purchased in nurseries in other regions and relocated there.

Department of Conservation technical adviser David Havell came across the infected plant, a hedge of the Lophomyrtus cultivar, while he was out walking.

He has been following the trajectory of myrtle rust since it was first found in New Zealand in 2017 and was involved in identifying the first and northern-most find on Raoul Island.

"Because I knew Lophomyrtus to be particularly susceptible to myrtle rust, I took a closer look," Havell said.

Sure enough, there were clear signs of infection.

Tiny yellow pustules were present on new leaves and the disease was also on parts of the stem, he said.

Havell said the infection looked quite recent, only the leaves had sustained damage, although there were spores on some of the stems.

Canterbury Regional Council said biosecurity officers conducted a search after the recent detection but did not find any additional plants that were infected.

Council said another survey was being planned for late spring when myrtle rust was more active.

Plant & Food Research conducted a weather risk analysis for Christchurch for the months preceding the report, they found conditions in the area were suitable on some occasions during summer and autumn.

Plant & Food Research scientist Dr Robert Beresford suspected that a slow build-up of undetected spores over many months, paired with periods of favourable weather, resulted in an infection.

"Rust is likely to be establishing in Christchurch and can be expected to be seen more often from now on," he said.