Myrtle rust has been detected for the first time on the West Coast on a young pohutukawa plant, Biosecurity NZ confirmed. 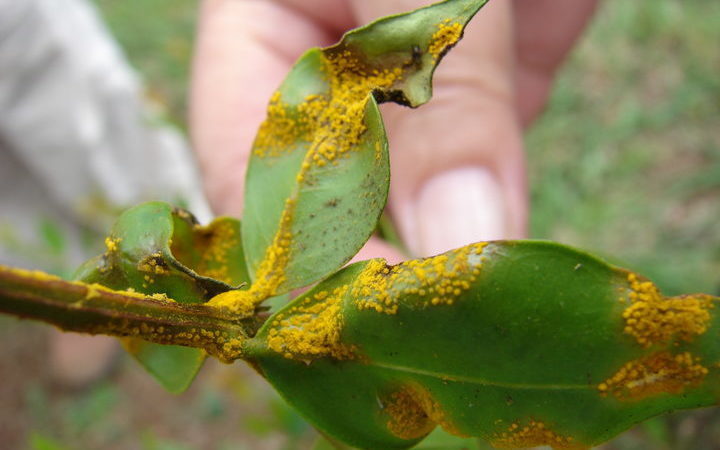 Myrtle rust is a fungal disease from South America that affects trees in the myrtle family, including natives such as pōhutukawa, rātā, mānuka and ramarama. Photo: Supplied

Biosecurity NZ was notified of the potential find on a commercial property in Greymouth.

Investigations have confirmed it is myrtle rust and local gardeners, orchardists and nurseries are being advised to monitor their trees and take protective action if they see signs of the disease.

This is the first case found on the West Coast but Biosecurity NZ said it had been known as an area where myrtle rust was likely to become established.

The fungus has been spreading rapidly across New Zealand since the first case was identified in 2017 and is well established across most of the North Island and the top of the South Island.

"Its spores are spread on the wind, by insects and birds, and on plant matter and machinery, and we have no real way to stop it," John Sanson, Biosecurity NZ manager of recovery and pest management said.

"The main way to manage it is by removing infected material, using good hygiene to prevent cross-contamination of plants, and avoiding pruning in warm spring and autumn months when plants are actively putting on new growth. There are no fungicides proven effective against myrtle rust available to home gardeners."

Myrtle rust is a fungal disease from South America that affects trees in the myrtle family, including natives such as pōhutukawa, rātā, mānuka and ramarama as well as exotics like bottlebrush and lilly pilly. It attacks new growth, preventing trees thriving.

The Department of Conservation (DOC) wants the public to watch out for the plant disease in the West Coast region.

DOC myrtle rust project manager Fiona Thomson said it wasn't clear how badly the disease might affect native ecosystems and asked people to report any they see on the inaturalist.nz site.says Fiona Thomson.

"Monitoring may identify natural resistance to the disease in some plants which would then allow us to mitigate the impacts in the longer term."