A small group of activists have held a "vigil" and picketed the offices of Port Taranaki in protest at the live export of dairy cows to China. 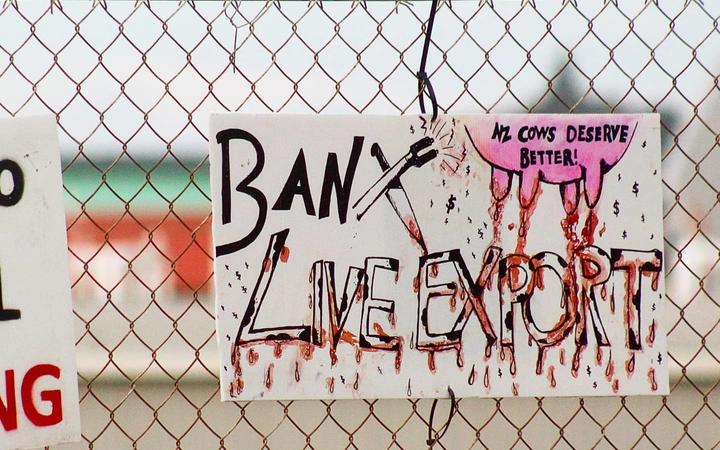 The livestock carrier Yangtze Harmony has been in port this week collecting 5700 cows.

Among the protesters was New Plymouth District Councillor Anneka Carlson.

She was calling on her Regional Council colleagues to stop the live export of cows through Port Taranaki, which the regional council owns.

"Elected officials have made this decision and they represent the public. And is this how we want to be represented?

"There is a petition, which is still open, with 7000 signatures calling for this to end. That's a lot of people who don't agree with it."

Carlson said she believed the cows suffered during the voyage and she was concerned about their fate upon arrival in China.

"Cows are not supposed to go on ships and we're shipping them to a country with no animal welfare regulations for cows. It just seems a cheap way of doing business for the port."

Campaigns manager Marianne Macdonald said, in the wake of an investigation launch by Australian Federal agencies in the inhumane slaughter of Australian cattle in Indonesia, it was asking Agriculture Minister Damien O'Connor what assurances he had been given that the same thing was not happening to New Zealand-sourced animals in China.

"Tens of thousands of cows have been exported from New Zealand to destination countries with no laws protecting the way they are treated once there.

"We're particularly concerned over the methods that will be used when they are slaughtered. They will likely still be conscious when their throats are cut."

Macdonald said there was no way New Zealand could stop the suffering of animals once they arrived in their destination countries. 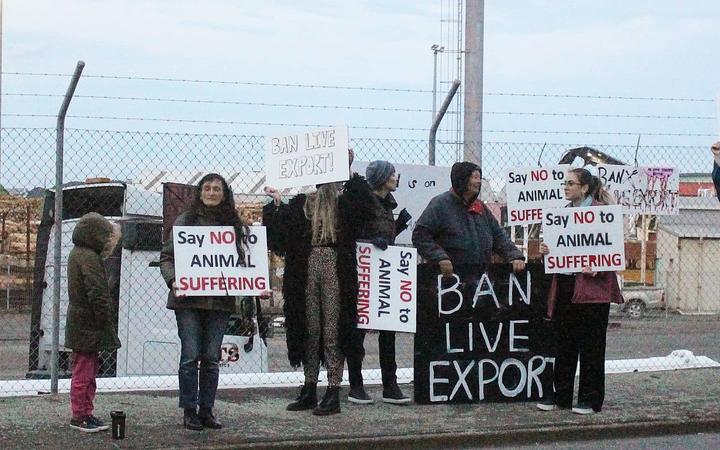 "The minister will not be releasing his review into live export until after the election. Given the growing body of international evidence of the cruelty associated with live export, it's clear that the trade must be banned."

"Breeding stock cattle shipments are another trade opportunity we have investigated and agreed to commence. On each occasion, the pre-arrival procedures confirm all regulatory certification and authorisations are in place, and we work with the exporters to ensure the export cattle have the necessary veterinarian and stock handling support during the voyage."

"We understand that people are interested and have views regarding live animal shipments, and we respect the public's right to protest in a peaceful and safe way," he said.

The Taranaki Regional Council said it had no view on the live export of cows because it fell outside its jurisdiction.

Acting chief executive Mike Nield said it was wrong to say such exports had been approved by the council as the matter had never come before it.

Nield said as required by the Port Companies Act 1988, Port Taranaki Ltd has its own independent board of directors and its own management structure.

"Under this law, the council cannot be involved in the port's operational matters, including this one. These are matters for Port Taranaki and its board. They do not come before the council for consideration or decision-making."

Nield said regional councils and port owners had no role in the regulation of livestock exports.

"They are regulated by the Ministry for Primary Industries. Any livestock exports from New Zealand cannot proceed without prior approval from the Ministry's director-general, as per the Government's Animal Welfare (Export of Livestock for Slaughter) Regulations 2016."

O'Connor said the cattle in these recent shipments would likely have gone to slaughter in New Zealand.

"The ability for farmers to export at this time relieves pressure from a shortage of feed as a result of a major drought, which is still affecting a lot of farmers around New Zealand."

O'Connor said New Zealand did not export animals for slaughter and the animals the country did export were used for breeding purposes to help develop the dairy and livestock industries in other countries.

"They are high value animals. The importers have made a significant commercial investment in these cows, so it is in their interests to ensure they are well cared for and maintained in excellent condition."

He said before animals were exported from New Zealand, they met conditions set by world-class veterinarians.

"There are multiple stages of strict requirements that must be met before an export can proceed. This year, the government strengthened them even further and we now require a report on the post-arrival welfare of animals, including information on their final point of destination and travel arrangements.

"MPI must be satisfied with the facilities and conditions on the vessel and no export will go ahead until the vessel is thoroughly inspected by MPI vets."

O'Connor said there was currently a review underway into live animal exports but decisions have had to be delayed due to the need for government to prioritise the response to and recovery from Covid-19.

"Until the outcomes of the review are determined, MPI will continue to consider applications for the export of cattle, deer, goats and sheep (livestock) under the current law," he said.