About 80 animal welfare protesters turned up outside Parliament today to call for an end to the export of live farm animals. 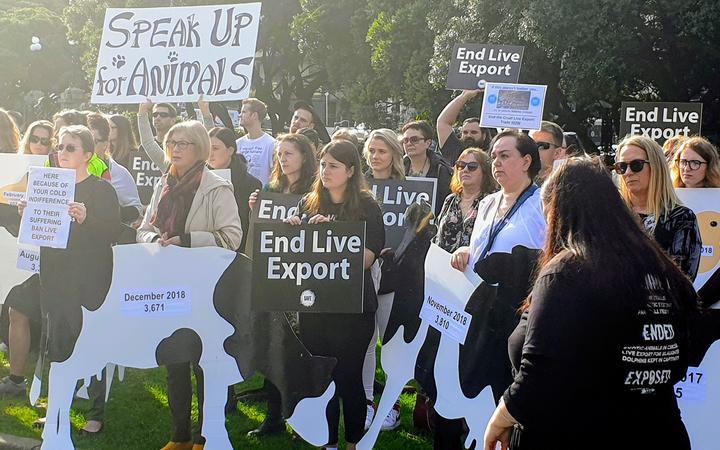 The protest was led by Save Animals from Exploitation (SAFE) and matched similar protests being organised in other countries.

SAFE argued a sea journey could be harrowing for animals and they could also face inhumane treatment in the country of their destination.

The protests came two days after the government announced that a conditional ban on live exports of cattle was likely, even though the matter was still under review.

Under this proposal, the live export of cattle would be banned as a default position, but exemptions could be granted if applicants could prove that conditions for the animals would be good, both on board their transit ship and at the country of their destination.

Sales of other stock besides cattle were not affected by the proposal, but could be brought in later.

This process is part of a government review that started when hundreds of New Zealand and Australian cattle died after they arrived in Sri Lanka.

The shipments were organised by an Australian company.

The government's move towards a conditional ban was condemned at the time as inadequate by SAFE spokespeople.

This view was reiterated at Friday's demonstration. 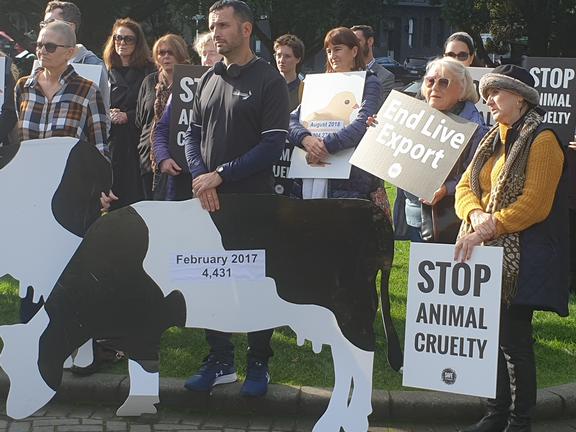 Animal welfare protesters turn out for a demonstration organised by SAFE outside of Parliament, 14 June, 2019. Photo: RNZ / Charlie Dreaver

"We're pleased to see that the agriculture minister is taking the welfare of live animals who are exported seriously. However, a ban on the export of live cattle will not go far enough."

Earlier, Damien O'Connor said the continued export of cattle might be a risk to New Zealand's brand, and the time had come to ask if it fitted with New Zealand's values as a country.

However, he has also condemned SAFE in the past as a reckless anti-farming lobby which was opposed to almost everything the agricultural community did.

Federated Farmers said it supported having a review of the live export trade.

However, it said conditions for animals on board ships were better than was sometimes portrayed.

In New Zealand, the value of the live export business has been declining anyway.