Many hill country farmers could be locked into low-return agriculture by government policy, with little chance of breaking the cycle, according to the main meat producers' lobby, Beef + Lamb New Zealand. 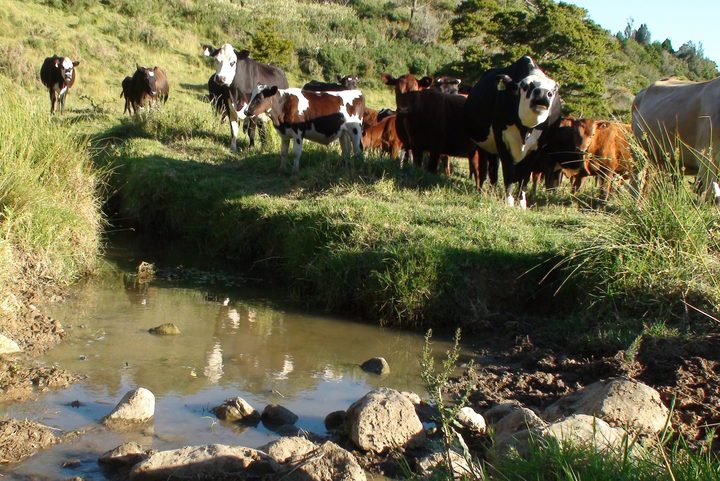 The offending cattle polluting a stream that feeds into the Hatea River, the Whangarei Falls, and the harbour. Photo: RNZ / Lois Williams

But farms that already leached nitrates into waterways would be allowed to continue, until at least 2025, under so-called grandparenting provisions of the government's Action for Healthy Waterways plan, which was released last month.

That plan expressed a desire not to undermine the New Zealand economy.

But Beef + Lamb feared it could reward the guilty and punish the innocent.

"The main concerns are that the current proposals would reward the highest nitrogen leaching operations and penalise the farming systems with lightest environmental touch. "

But they were concerned that a straight-jacket, through a range of "grandparenting provisions", was being placed on low-emitters - including most sheep and beef farmers - to mitigate against the impacts of high emitters.

"The government is, in effect, placing high costs on our most environmentally sustainable and low impact farming systems."

He went on to say that sheep and beef farms had low nitrogen leaching rates, averaging 14kg to 17kg per year, which was only slightly higher than leaching rates from forestry.

But they were given no flexibility to make the adjustments needed to pay for increased compliance costs under the proposed water reforms.

Nor did they allow farmers to gain the revenue needed to adapt to changing market or climatic conditions.

"Under [the proposal] low emitting systems won't be able to do anything that would increase their emissions even by a small amount, such as diversifying into crops or using cropping for feed to improve their productivity, to offset these compliance costs," the Beef + Lamb statement said.

"Modelling by Local Government New Zealand estimates that under these proposals, land under sheep and beef production in the Waikato-Waipa catchment could decline by 68 percent."

Farm experts believe the Beef + Lamb statement overlaps concerns by organisations that are widely disliked in the farming sector, such as Fish and Game.

But it could put the organisation offside with the dairy industry.