Warning: This story contains first-hand accounts of the Christchurch 2011 earthquake that may be distressing for some readers.

Some have probably told their stories many times to friends and family. Their accounts are all fragments of the same story - the story of a broken city. 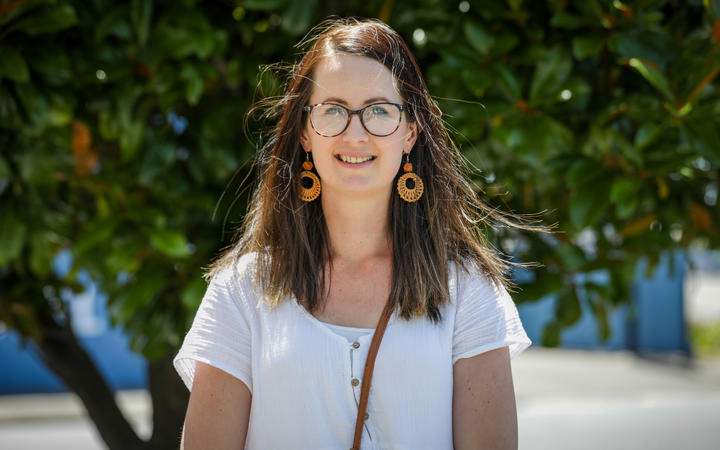 Summer Shalders (Olliver) was trapped and badly injured in the collapse of the PGC Building. Photo: RNZ / Nate McKinnon

Those who were in Christchurch on 22 February 2011 all have a story to tell.

Some have probably told their stories many times to friends and family - they've got used to them and the stories have come to define the day for them.

They're all talking about the same day, stories unfold simultaneously, they overlap - people cross paths and help each other.

Their accounts are all fragments of the same story - all little pieces of a bigger narrative - the story of a broken city.

RNZ marks 10 years since the major earthquake on 22 February 2011 with Fragments, produced and presented by Christchurch-based journalist Katy Gosset.

The series brings together an archive of first-hand accounts recorded in the months following the devastating earthquake, by locals Julie Hutton and Sandra Close.

Ten years on, RNZ checked in with some of the survivors to reflect on their experiences.

How has surviving the quake changed the way they live?

It suffered what has been described as a "catastrophic" collapse.

Built in 1966, the five-storey building near the band rotunda in the city centre, had six businesses tenanting it.

A report for the Ministry of Business, Innovation and Employment (MBIE) by Beca after the quake found the shaking experienced was "several times larger than the loads the building was designed to resist".

However, it concluded that despite other earlier quakes "there were few, if any, signs that the building had been significantly distressed in the shaking that had occurred, or that collapse was a possibility".

This episode is about those who were inside the building, and those who came to the rescue.

Monique Mclennan had just started heating her lunch when the quake struck and she was trapped inside.

She took shelter under a desk - and can still remember the feeling of it pressing down on her - and the fear.

Sometimes the smell of dust can take her back. She was diagnosed with acute post-traumatic stress and later lost her job.

But in the 10 years since the earthquake, she says her life has "changed substantially" and for the better.

"Once I got through all of my post-traumatic stress I kind of decided 'you know what I've only got one life to live so why am I trying to work within these boundaries other people have put in front of me?'."

Summer Olliver was inside, too.

"It was bigger than any of the other ones and all I remember is just dropping to the ground and trying to get under my desk ... to prove how quick it was my leg was still hanging out from the desk and a six-tonne beam had dropped on my lower back."

That was a life-changing event. The damage it caused resulted in a lot of recovery and pain therapy. It was an experience you live with more than remember, she says.

And she feels a kinship with others who have gone through trauma; fellow quake survivors, the Whakaari/White Island victims and the families of those who died in the Christchurch mosque attacks.

Outside the building, people were preparing to come to the rescue almost as soon as it collapsed.

Dave Lang was working next door. From his office, he watched the PGC building collapse about 30 metres away.

"Towards the end of the shaking I turned around and looked out of my window and as I did that I saw the Pyne Gould Building just collapse and it ... it ... it just seemed to go down like that and with the sound of rushing water, which I guess was breaking glass and concrete and stuff."

Lang and colleagues were among the first on the scene.

Meanwhile, Fire and Emergency assistant area commander Steve Kennedy was on the way.

"The shaking had stopped so essentially from there I thought, 'hey, look, we've gotta get everybody organised'."

With fire engines out on the road, at some point "a guy came running through the crowd and he said: 'look, the PGC Building has collapsed', and so I decided that I'd take my appliance round to that."

Building contractor Peter Riley was in action, too.

He'd been at home doing paperwork then tried to contact his daughter and then his friend Tony Tamakehu who runs a company supplying rigging and lifting equipment.

They headed to the PGC building.

"Tony picked me up, tooled up, jumped in the ute and made our way in."

The pair were among those who worked to free survivors stuck inside.

Tony still lives in Christchurch - unlike Peter, who moved away.

He still has the same job. He tries to say yes to travel or other opportunities if he can. "Life's short," he says.

There've been some changes, all normal life stuff Tony reckons. He's separated from his wife and lives in an apartment in the city, quite near the site of the PGC building.

"I pass it every morning. Now and again I'll swing by there and sit on the wee seat they've got there, have a wee think. Think about the people who aren't with us anymore. Yeah. How it affects their families."

You can hear more about what life is like for quake survivors 10 years on by listening to Fragments Episode 2: The PGC Building.

Fragments is written and presented by Katy Gosset and co-produced by Gosset and Justin Gregory. It's engineered by Alex Harmer and Rangi Powick. Video content is by Nathan McKinnon. Tim Watkin is the executive producer of Podcasts and Series.

Thanks to Julie Hutton and Sandra Close for their work in recording interviews and to those who agreed to be re-interviewed by RNZ.