Three RNZ reporters working in Christchurch on 22 February 2011 tell of their experiences on the day the earthquake hit, Jessica Maddock describes the frightening and unrelenting day that unfolded before her. 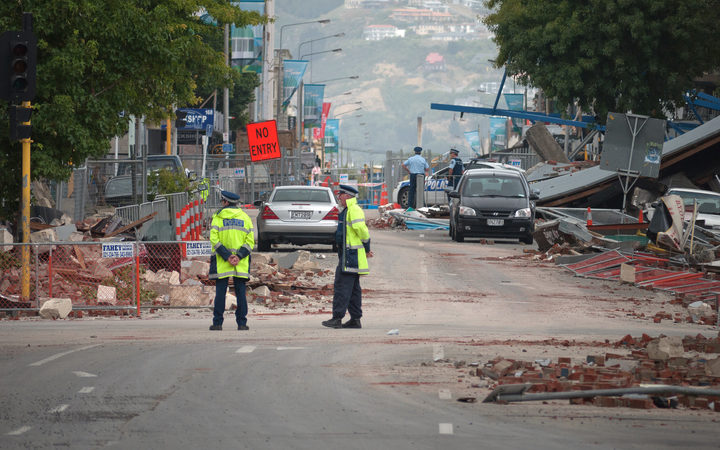 Police stand by amid fallen debris in a cordoned-off street in Christchurch on February 23, 2011 a day after the deadly earthquake. Photo: AFP

We slept in our car for 10 nights after the February earthquake. Our home, three-storeys on Mt Pleasant, had gone from haven to threat.

Ten largely sleepless nights, worrying about the retaining wall beside us and the power pole above us. We lived, a scientist neighbour estimated, within a kilometre of the faultline and even a magnitude two aftershock rattled our house and our nerves.

I'll never forget the look of horror on my colleagues' faces when that earthquake slammed into us. Most of us had been through the September quake and knew this was something terrifyingly different.

We evacuated RNZ House. The glass facade of the foyer had shattered and the outside lift shaft detached from the building. Outside the air was thick with dust, like a scene from 9/11. The stone church beside our office had collapsed. It haunts me that we walked past it, unaware three people were inside.

I rang RNZ's Wellington headquarters. "Can you go live?" was the first question. When I listened back, my voice was thin, shaky, breathless.

RNZ's Christchurch journalists initially gathered in Victoria Square, with many others. There were people on the balconies of the high-rise Forsyth Barr building, desperately signalling for help. A few minutes later there was a massive aftershock and people dropped to their knees in fear.

A new RNZ intern, Marcus Irvine - just a couple of days into the job and thrown utterly in the deep end - and I went to the Christchurch Art Gallery, past bloodied people and flattened buildings, assuming it would be a Civil Defence hub as it was after the September quake. 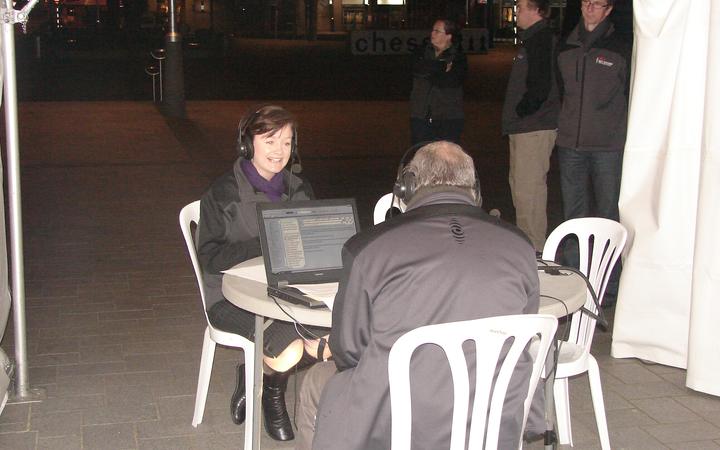 My two phones rang constantly - RNZ's various departments and anxious family. I was desperate to check my partner was safe. He was in Lyttelton and by now I knew Lyttelton was the epicentre. It was an hour before we got hold of each other and I was worried sick.

It was a frightening and unrelenting day, the first of many. The glass facade of the art gallery flexed alarmingly during aftershocks - and they felt constant - and the news got worse and worse.

As night fell, I made my way to my car. The city centre was a hive of activity, but eerie. Search and rescue personnel worked frantically, police and soldiers manned cordons, sirens blared constantly.

A panicked motorist had blocked access to the carpark. I squeezed my car out by scraping it alongside a concrete wall and crawled home through the chaotic, frequently lawless traffic jam that covered the city.

My partner had made it home from Lyttelton, a nerve-racking drive over Dyers Pass, where huge boulders littered parts of the road, sometimes tumbling further and plunging into people's homes. I often think of Owen Wright who tried to walk over the Port Hills home to Lyttelton and never made it.

Our house - purchased with such excitement just four weeks earlier - was filled with broken glass. Heavy furniture had toppled; glass cabinet doors had flown off runners, embedding in walls metres away; glass light shades had smashed from the ceiling; walls were cracked inside and out. I was glad I wasn't inside our haven at 12:51pm.

But we were lucky. Most homes on our street were too dangerous to enter. At night we sometimes heard looters smashing windows, helping themselves to other's lives. It was unbelievable and despicable.

I felt a great responsibility covering the earthquakes. People were terrified. They did not need to turn on the radio for information and hear drama. They needed facts, as brutal as they were, and calmly.

Each day was heartbreaking - at the CTV building where a horrifying number of bodies were found; flattened homes in Redcliffs from which elderly people were unable to escape; people's dream hillside homes with car-sized boulders in their living rooms. An outpouring of grief, fear, shock, loss.

A decade on and the effects linger, probably always will. I assess the risks whenever I go somewhere new - cliffs, boulders, tall buildings, trees, the beach. I don't stay in old buildings or high-rises. When I drive to Queenstown or the West Coast from my Wanaka home, I have lurking thoughts about being trapped there following a quake.

Christchurch people tired of plaudits about their community spirit, but it was prevalent - our new neighbour who cooked us dinner from her garden, the guy at the traffic lights handing out bottles of water, strangers who asked "are you ok?". It all made a really hard time a little bit easier.