Warning: This story contains first-hand accounts of the Christchurch 2011 earthquake that may be distressing for some readers.

Those who were in Christchurch on 22 February 2011 all have a story to tell. 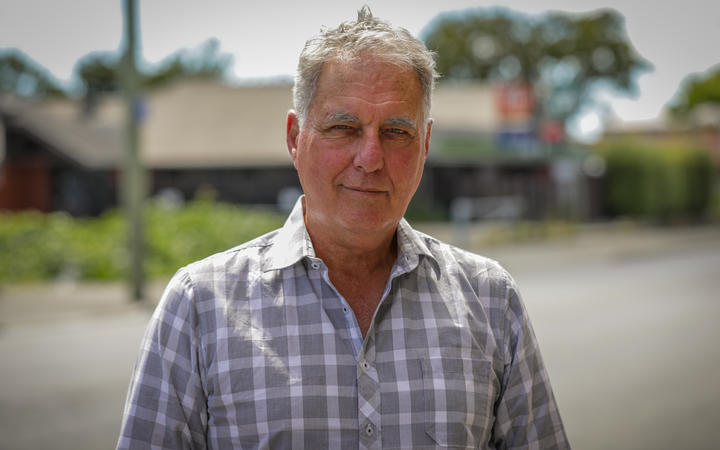 115 people died in the collapse of the CTV Building. Richard Austin's wife Susan Selway was one of them. Photo: RNZ / Nate McKinnon

Some have probably told their stories many times to our friends and family - they've got used to them and they've come to define the day for them.

They're all talking about the same day - stories unfold simultaneously, they overlap - people cross paths and help each other.

Their accounts are all fragments of the same story - all little pieces of a bigger narrative - the story of a broken city.

RNZ marks 10 years since the major earthquake on 22 February 2011 with a six-part podcast series Fragments, produced and presented by Christchurch-based journalist Katy Gosset.

The series brings together an archive of first-hand accounts recorded in the months following the devastating earthquake recorded by locals Julie Hutton and Sandra Close.

Ten years on, RNZ checked in with some of the survivors to reflect on their experiences.

How has surviving the quake changed the way they live?

The CTV Building. It would become a household name after 22 February 2011.

The six-storey structure stood the corner of Cashel and Madras Streets in the Christchurch CBD.

The quake left 115 occupants dead after the building collapsed. Four of them were never found.

The aftermath of the collapse of the CTV Building and a quest for justice has been a long-running tragedy that continues to this day.

Like elsewhere in the city, the story of the building in the quake is one of horror and humanity, as people came to the rescue, and a makeshift triage centre is set up in nearby Latimer Square.

Richard Austin's wife, Susan Selway, had bounced around offices in Christchurch a bit after the earthquake in September 2010.

From the old Girls' High building, to Kenton Chambers, then a move from there after the Boxing Day earthquake, and eventually, for what was supposed to be a short-term fix - in the fourth floor of the CTV building.

When the quake struck, Richard was on a plane from Auckland to Christchurch. They had to turn back. Once they landed, passengers watched news coverage in the airport.

"They then showed this huge, big pile of rubble and then the camera sort of panned down and they had this sign in front of it which said, "Canterbury Television House".

"And I just looked at that and I thought, God, that's the building Susan's in."

Richard couldn't get in touch with her.

"She's a real survivor and so I thought, right, well, she's either not in there cos she would've gone to lunch or she's in there.

Eventually, he made it to Christchurch and the Latimer Square triage centre.

But from there, he could see the CTV building was on fire.

He spent 30 hours in the Square, waiting.

"Eventually they came and said, 'Look, we're down to the third floor and there aren't any survivors there and I'm really sorry to tell you that'."

Journalist John Campbell was nearby. They'd met the day before at Auckland Airport.

"And he sort of looked at me and then he burst into tears and he grabbed me and he was sobbing on my shoulder... So we had a bit of a cry together."

Richard kept waiting. Eventually, he was told there were no survivors left.

"I knew Susan was still there so for me it was almost like confirmation."

The triage centre was being organised by ambulance officer Craig Stockdale,

But even getting there was hard - the city was gridlocked - and people kept coming to him, asking for help.

Before that, though, the ambulance crews had to DIY themselves out of their damaged station, where their vehicles and equipment were trapped.

"The hardest thing in the world for me was to keep focused on some of the bigger picture jobs and I had to say to people, 'Look, we will either get to you when we can or your best bet is to drag them out and just take them to hospital'. Now, we didn't have the resources," Stockdale says.

"If I become too engrossed in helping one person at one spot then you kind of lose that [bigger] picture. And that was really tough for me as a practitioner because normally it's one on one with a patient and you do your best for that person and, you know, and care for them."

At Latimer Square, they put up two large inflatable tents - there are ambulances, staff and equipment for mass casualty incidents.

"The police were really good, they just came and said, "What do you need?" And I said, "I want this area here sealed off, the possibility of a helicopter landing area over here, toilets, you know."

Decision making was not easy - choices like prioritising helicopter flights to hospitals for patients less likely to die before they got there than others.

But Craig was proud of the work people did there.

"People just sort of got on and did what they had to do and what they were asked to do, put themselves probably in situations that they wouldn't normally and I think that's really admirable."

Pete Riley was one of the tradies who worked to rescue people from what was left of the CTV building.

He'd already done a stint the day of the quake at the PGC Building, and the next morning, was back lending a hand, along with his mate, Tony Tamakehu.

"Tony and I just had this unspoken understanding that we'd go there because in Māori culture it's all about getting the ones that are deceased back to their families for closure and we just knew... without saying that was why we were there."

Pete worked alongside other contractors, police and search and rescue crews.

All up, the rescue and recovery effort at the site took more than two weeks.

Pete has since left Christchurch.

He's had a change of lifestyle, values, and perspective.

He moved to a quiet spot where he can ride horses, live quietly and pay attention to the important things in life. And yes, 22 February played a big part in that decision.

On the day, he knew what he had to do - but he has struggled with what he saw.

Pete's glad he agreed to be interviewed back in 2011. It helped him understand that he was traumatised and needed to let go of some things.

"Once I started talking I realised it was an outlet. I could lift the burden and talk. I just spoke. It was like a therapy session for me."

That said, he still carries baggage from 10 years ago, and feels it every day. He does wish he'd said something to the man who died in front of him on the roof of the PGC Building.

Pete's not that fussed by his heroism award but respects the city's need to say thank you. He prefers the understanding he shares with the people who were there with him, like Tony Tamakahu, Tim Smith and the rest of the team. They don't talk much about what happened. They don't need to. Everyone already knows and understands.

You can hear more about what life is like for quake survivors 10 years on by listening to Fragments Episode 4: The CTV Building and Latimer Square.

Fragments is written and presented by Katy Gosset and co-produced by Gosset and Justin Gregory. It's engineered by Alex Harmer and Rangi Powick. Video content by Nathan McKinnon. Tim Watkin is the executive producer of Podcasts and Series.

Thanks to Julie Hutton and Sandra Close for their work in recording interviews and to those who agreed to be re-interviewed by RNZ.