Today marks a decade since the earthquake close to the centre of Christchurch killed 185 people. 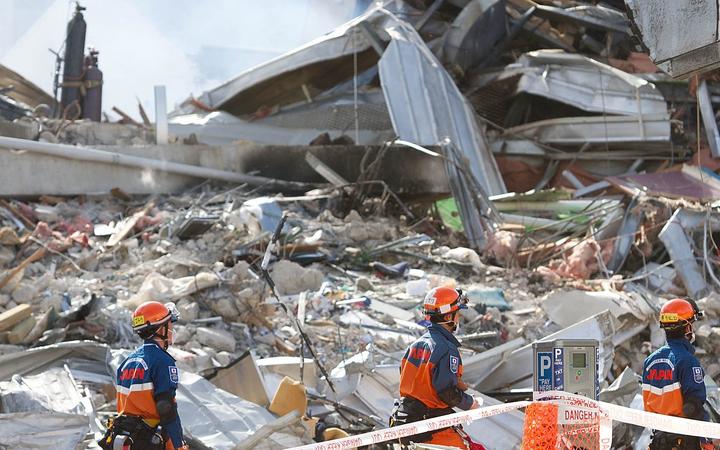 The ruins of the CTV building in Christchurch on 24 February 2011. The building collapsed during the quake and 115 people were either crushed to death or died in the following a fire. Photo: AFP

Everybody in the city that day has a story to tell and for many, the memories remain fresh, even 10 years on.

While it only lasted roughly 10 seconds, the shaking that day was strong enough to topple two high rise buildings and send brick shop fronts crashing down on to passers by.

The timing, 12.51pm on a weekday, meant that a large number of people were in the city, where nearly all of the deaths occurred.

Ann Brower was one of 10 passengers on a bus travelling through the middle of the city when the quake sent an avalanche of bricks crashing down on to her.

She was the only one to survive.

Ten years on, and standing at the exact spot in central Christchurch, Ann Brower recalled in vivid detail the event that changed her life forever.

"I was crushed trapped and alone inside a bus underneath a building."

"The bricks got louder and turned into big chunks of buildings and then the roof of the bus collapsed onto my hip. Then I felt an unbelievable pressure on my left hip, and the pressure kept coming and coming and coming and at a certain point, I just thought I'm not sure how much more of this I can take."

Brower broke her pelvis, leg and hand and spent two months in hospital.

She was off work for a year and described living in a fog for the next four years.

It made her determined that nothing like this should happen to anyone else. She threw herself in to years of lobbying for similar unreinforced masonry buildings, to be removed or strengthened.

Brower said the 13 people next to her that day should still be alive.

"Because it's not normal in a first world country to have deaths on the street, even in an earthquake, like you look at LA and yes, there were deaths in the LA earthquake in '94. But put it this way, there were actually fewer deaths in LA as there were in Christchurch and LA is how many times the size of Christchurch?"

Senior firefighter Terry Gyde was given a New Zealand Bravery Award for helping to pull 16 people from the rubble of the CTV building, eight dead and eight still alive.

He made a point of keeping in touch with Norika Masutani who was a similar age to his daughter.

At one stage they were considering amputating her foot after it became wedged under a beam.

"It dawned on her that we were going to cut her leg off and she just gripped [hold of me and said] 'you not cut my leg off. I trust you'. And I'm going, 'I'm the last person you want to trust right at this very moment'. But Paul [Rodwell] and I, we found a bit of webbing and said we'll give it a crack, and if we break a leg, she isn't gonna know anything. And Paul gave it an almighty yank and I heard a crack and he just said 'go'. So I knew she was free."

Gyde was full of praise for fellow firefighters, including 19-year-old Josh Kumbaroff who was fresh out of school and thrown straight in to crawling amongst the rubble searching for survivors.

"There was this massive, massive aftershock and the building just crumbled again and Josh, I always remember looking at him and I turned the light on and you ever see a prizefighter when they sweat up, and he sweated up like a boxer and he said, 'are we dead Gydy?', and I said, 'I don't know mate but let's get out of here real quick'."

Gyde said those on the frontlines that day were totally let down by Fire Service management who he said were missing in action.

He said in their absence, senior station managers took over on rescues at CTV and PGC, and he was glad these same men were now leading a much-improved service.