Aside from the hundreds of firefighters, police and road workers, Auckland CBD has been eerily deserted for the past two days, with most businesses having shut up shop because of the convention centre fire. 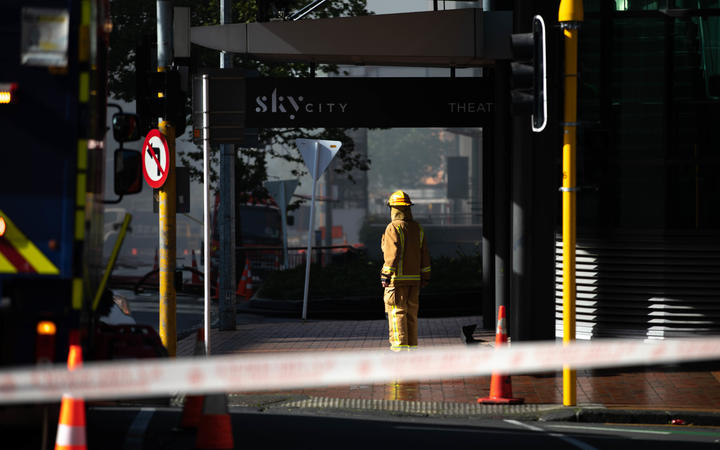 Almost all of the big shops were closed, with just a few small businesses keeping their doors open in the hopes of attracting the scant foot traffic passing through the area.

Heart of the City boss Viv Beck said she'd never seen Auckland so quiet on a weekday as it was for the past two days.

"It was incredible to see so many businesses shut in a busy city centre like we've got," she said.

"As far as I know the last time something of this sort of magnitude took place ... [was] the electricity crisis in the late '90s."

She estimated that two out of every five businesses were closed yesterday morning, with the number increasing later in the day.

It was too early to say what the economic impact of the event will be - but Ms Beck believes it'll be significant.

"It's been a pretty tough day I think in the heart of the city. It's pretty devastating to see a fire in a wonderful facility like this," she said.

"I think it's been also a very significant event when you not only get large businesses saying to their staff to work from home if they can, but we've seen a lot of small businesses close too, and I think that shows the magnitude of what's really happened here."

For shops on Albert St it's a particularly big blow, as many are already having a hard time due to seemingly endless road works for the City Rail Link.

Shobhana Ranchhodji runs the florist Roma Blooms on the corner of Albert and Victoria Sts.

"We've had no-one come into the shop. We've had our door closed 'til 1pm and then we felt like the air had shifted so we opened the door.

"And we had big signs outside saying, 'We are open'. But nobody's walking in the city ... maybe one or two who need to get somewhere. Other than that there's no traffic."

Yang Li leaned forlornly on the counter of his cafe, Coffee Right, on Albert St opposite the Auckland District Court, which has also closed over concerns about air quality due to the smoke.

"I thought today's going to be okay but ... it's pretty empty. I still have to pay the lease, but no business."

Jay Chauhan's restaurant, Taj Mahal, might have been the only place you could get a curry in the city.

"At the moment those packages are designed for ... for instance businesses caught up within cordons where they are literally are unable to trade and that then has a knock-on effect for staff.

"Those are the parameters under which MSD have operated [and] I see no reason to believe that we have need at this point to look beyond that. But we always keep a watching brief for situations that are unique."

The ministry was unable to clarify last night whether businesses outside of the cordons that have suffered losses could apply for assistance.